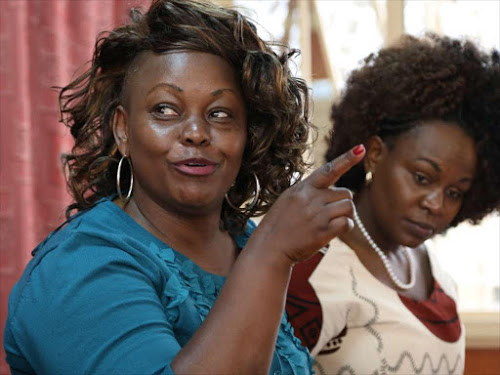 Following series of attacks on Esther Passaris by Governor Sonko, Suba North MP Millie Odhiambo came to her rescue during a heated debate in parliament where she accused male counterparts of using women’s sexuality to embarrass them.

“Madam speaker it is a puzzle at how our male MPs are dealing with issues to do with women. They have double standards and utter no word when women are being stoned but when it is one of them they will come here breathing fire in their own defence,” she said.

“I want to tell you that women are not low-lying fruits. Instead of focusing on their legislative and representative roles, they are busy oversighting women’s private parts. Why are they making our private parts their business?”

“Madam speaker these male MPs have over 20 lovers…we know them but we never make it our business. Why does it become their business if it is us,” she said.

The MP said Assembly’s speaker Justin Muturi should facilitate the return of the V-monologues to allow them to have substantial debates over the matter.

“The other day it was Shebesh, no one said anything. Today it is Passaris and who knows who will suffer the same fate tomorrow. We are not going to allow that and I want to tell you our brothers we shall deal with you perpendicularly,” she said.

“What is wrong with Passaris telling Sonko I love you. There are so many forms of love like Agape love and the rest, why should our male MPs be the ones to define what form of love we should feel for so and so.”

“My husband is Zimbabwean,  the reason I have no dual citizenship is because  I am still negotiating with him on whether to marry a second and a third husband as men have done,” she said.

“If he allows me, I will come back to this house and change the law then declare even my triple citizenship. The men should thus stop judging us on where we are married yet they have married several foreigners.”