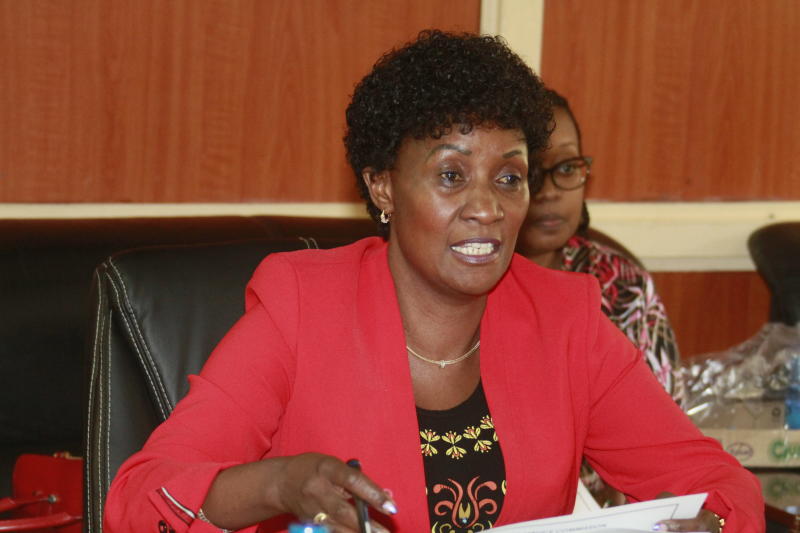 Kenyans on Twitter have thrown TCS CEO Nancy Macharia in a furnace and she, according to KOT, she’s next on the line of the cut, drop and terminate culture she has employed.

This comes after the TSC boss issued KNUT with a termination notice of the recognition agreement with the teachers Union.

In the letter, TSC boss Nancy Macharia had notified the National Labour Board that KNUT had plummeted below the number of members as noted in their 51 years agreement.

“The Kenya National Union of Teachers does not have the simple majority of unionise employees under the employment of the Teachers Service Commission as at November 4, 2019,” reads part the letter as quoted by local media.

This is happening just days after TSC boss Nancy Macharia de-registered KNUT Secretary General Wilson Sossion from the teaching fraternity. The termination of ODM nominated MP was gazetted by the embattled Nancy Macharia meaning that Sossion will no longer be recognized as a teacher or teach in any school.

Here are randomly sampled tweets about the melee between TSC and the Teachers union, KNUT.

Always remember, you are a public servant with no security of tenure. Your retirement or arrest whichever comes first is always around the corner. Don’t let power get into your head. Don’t abuse power.

Teachers Service Commission @TSC_KE is a odious, authoritarian and cruel anti-teachers Institution. It's leadership led by CEO Nancy Macharia is nothing but state repression enforcer TOOL. Teachers, you either stand together OR you be hanged separately. REJECT TYRANNY!

Who is Nancy Macharia working for? Why is she fighting trade unions? Where is COTU and TUC? Where is the ILO? pic.twitter.com/572DT7qTTd

We are teachers and we know that Nancy Macharia does not make decisions without consulting the commissioners. Sossion fought for the teachers, but; when he joined parliament as an ODM legislature things changed. How do you negotiate with an arrogant unionist who is in opposition?

This WOMAN (Mrs Macharia) has DESTROYED innocent teachers…she personifies the CAPTURE of independent constitutional commission by the executive. pic.twitter.com/CpO3AMSdtH

Sad.She has outdone bureaucrats in the MoE during Moi era.She acts with impunity that is Jubilee.Whoever is behind her is powerful n hates teachers.She has killed the noble profession.Then some wonders y learners no longer act as in the past.Teaches don't care.They're demotivated

Nancy Macharia thinks she is immortal and a supremo at TSC. You have over stepped your mandate.We shall invoke the spirits of famous unionist like Tom Mboya and you will walk naked on these streets.

Teachers Service Commission and specifically Dr. Nancy Macharia is now being too toxic on its relationship with KNUT.

Unions hold an important place in society. Relationship with employers is partnership. Partners disagree from time to time but that relationship cant be killed. pic.twitter.com/NRn4d590Ad

The TSC is terminating its' 51-year-old agreement with the Kenya National Union of Teachers, citing shrinking membership.Dr Nancy Macharia, this is like divorcing your husband / wife of 51 years because they no longer look youthful! Get serious!???? pic.twitter.com/K3vS3CPHQj

Why is TSC CEO Nancy Macharia so ill-bent on de-registering Wilson Sossion as a teacher? Kenya has over 500,000 teachers & most of them dabble in politics & moonlight in other jobs …. Did Sossion eat Macharia’s goat or moved her cheese? Sossion should fight this discrimination.

Related Content:  AoN Insurance In A Tendering Scam To Win A Sh.15Billion Deal With TSC
Kenya Insights allows guest blogging, if you want to be published on Kenya’s most authoritative and accurate blog, have an expose, news TIPS, story angles, human interest stories, drop us an email on [email protected] or via Telegram
Related Topics:KNUTKOTNancy machariaTSC
Up Next