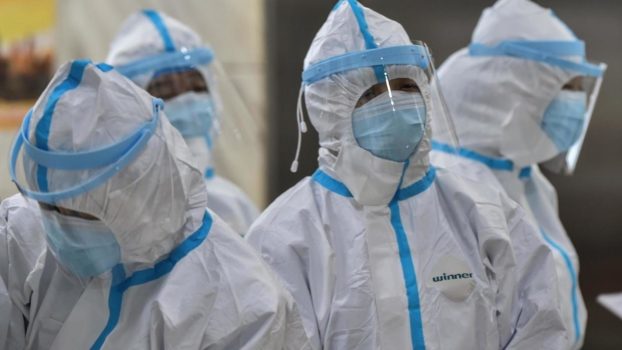 The government has embarked on mass testing of Covid 19 in the country after latest trends of infections indicated that the highly contagious disease was fast spreading into the counties.

Chief Administrative Secretary Dr. Mercy Mwangangi expressed fears that the virus was increasingly moving to the counties going by the latest cases of fresh infections where sporadically spread out to all corners of the nation.

“We have started mass screening of health workers but taking into consideration the risk profiles of clusters now domiciled right from the South in Kilifi to North in Mandera while Vihiga to the west and Kitui Counties at the East competes the extent of the spread of coronavirus in the nation “she said.

While giving an update of coronavirus status in the country,Dr. Mwangagi said the first phase of the mass testing will see approximately 12,000 testing kits deployed to target areas in the next few days.

In Nairobi she explained that the testing will prioritize quarantine centers, hotels , isolation facilities , hospitals and also the high population density area like Kibra.

In Mombasa, , she added they are deploying 1000 testing kits to Kenya Ports Authority (KPA), based on the risk of transmission identified by monitoring teams and the same will also go with Mandera and Siaya Counties.
“We must work even more closely with our County Governments to tighten our control measures, harmonize our responses and mobilize our people to take an active role in this fight”, the CAS said.

Dr. Mwangangi broke down cases naming Nairobi which has the highest number at 101, followed by Mombasa which has 34, Kilifi has 10, Kiambu has 7 while Mandera and Machakos have 6 cases respectively.

Others are Nakuru which has 5 cases, followed by Kitui, Laikipia, Kajiado, Muranga, Kakamega, Nyandarua , Siaya Uasin Gishu which has 2 each while Kisii, Homabay, Nyamira, Nyeri, Vihiga and Kwale who have one case each.

In the last 24 hours, Dr. Mwangangi said that out of the tested 694 samples, eight tested positive for Coronavirus disease, bringing to 216 the total number of confirmed cases in the country.

Five of new patients were Kenyans while the other three included a Briton, Pakistan and Ugandan national out of whom six reportedly had a history of travelling to UAE, UK, Pakistan, Zambia and Comoros.

“The spread of the new cases with regard to their counties of residence is a Nairobi 6, Siaya 1 and Nakuru 1”, she said adding that in terms of distribution of the cases in age, the pattern continues where we see the disease affecting the most productive group of the society.

The CAS confirmed that six of today’s cases emanated from the mandatory quarantine centers, while two (2) were picked by surveillance teams.

Over the same period she noted that one (1) more person was discharged from hospital bringing figure of recoveries to forty one (41).
So far a total of 2,331 contacts have been monitored, out of which 1,729 have been discharged and 602 contacts are being followed at the moment.

Meanwhile, Dr. Mwangangi has today confirmed that the country is witnessing a spike in domestic violence, gender based violence and sexual offences across the country that is 3 more times than the normal .
“We are in constant communication with the Gender Violence Recovery Centre (GVRC) and the National Council on Administration of Justice (NCAJ) has recorded an increase in cases of sexual violence perpetrated by close relatives and guardians”, she said.

Even as the government addresses this issue between the various Departments, Dr. Mwangangi called on Kenyans to focus on fighting the virus, and to handle disputes within the civil structures and devoid of violence.

“We want to remind everyone that the law has not been suspended, and that it will catch up with those who mete violence on others during this period”, she said .

Dr. Mwangangi noted that maintaining social distancing does not mean people cease communicating with each other and thus during this period its important to engage each other through the available social medial platforms, counsel each other, learn and have fun while at it.

The CAS has further warned those abusing the measures put in place and throwing house parties saying that the law will catch up with them saying if Kenyans successfully adheres to measures put for the next one month, the Country could succeed in flattening the curve and reclaiming loses on the Covid-19 disease.
In the last one month the Country has witnessed the number of Covid 19 rising and might be moving to worst case scenarios with community testing according to the Ministry of Health..

Related Content:  Parts Of Beijing Locked Down Due To A Fresh Virus Cluster
Kenya Insights allows guest blogging, if you want to be published on Kenya’s most authoritative and accurate blog, have an expose, news TIPS, story angles, human interest stories, drop us an email on [email protected] or via Telegram
Related Topics:
Up Next