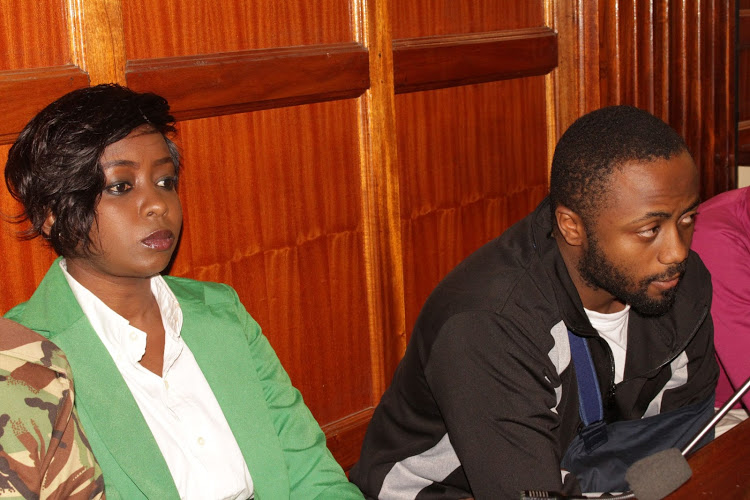 Ms Pamela Ingato Kembo, Ms Jacque Maribe’s house help and the recent witness to testify in the murder trial of Mr Joseph Irungu, alias Jowie, and Maribe has recounted to the court Jowie and Maribe’s day to day routine.

Ms Kembo narrated to the Milimani Law Court how Jowie used to take Jacque Maribe to work regularly and then return home to sleep and later in the evening he would pick her up from work. Jowie would use her car for this routine drop and pick.

Ms Kembo told the court that Jowie started visiting the former Citizen TV journalist in 2017 then later moved in with her in June 2018. Maribe introduced Jowie to her as being an army officer who worked in Dubai.

On the 19th of September, Ms Kembo says Jowie followed routine and took Jacque to work then came back to sleep, he left at about 4pm in Maribe’s car. He was in grey shorts, white shirt and sneaker and carried a back bag. “Both of them did not come back that night and I didn’t hear them when they came back.” She narrated

On September 20th, Jowie following the norm took Maribe to work and came back to sleep. “Later that evening he left again. At around 1 am that night I heard Jowie shouting out to Brian (a neighbor) for help. I left my room and found Jowie’s clothes and possession downstairs,” she stated. She said she rushed to the master bedroom upstairs and saw blood and a gun.

She said Mr Kassaine and Ms Maribe took Mr Irungu to hospital and came back with his arm bandaged. “Jowie and Jacque came back and his hand had been bandaged. They then went upstairs to sleep.” About three days later, Mr Irungu was picked up by police officers.

Ms Kembo was testifying in the trial of Mr Irungu and Ms Maribe, Both have denied the accusations of killing Monica Kimani, whose lifeless body was found in the bathtub of her apartment in Lamuria Garden, Kilimani.

Jowie made a fresh application to be freed on bond, saying the protected witness had already testified and his family would accommodate him, if freed on bond.

Justice James Wakiaga will rule the application in February and the hearing resumes in March 17, 2020