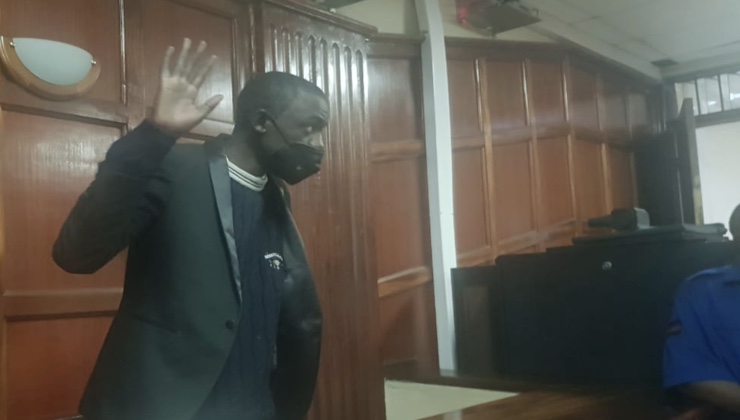 Jones Ochieng Mbogo will be cooling his heels in Industrial Area Remand Prison until March 3, 2021, when his sentencing will be read. Ochieng pleaded guilty attempting to extort Ksh200,000 from Lamu Senator Anuar Loitiptip after recording the lawmaker allegedly smoking shisha at a Nairobi restaurant.

Ochieng also had with him explicit videos of Aedah Bambi pleasuring herself. In his accusations, Ochieng sent the video and photos to the Senator saying the girlfriend had sent to another man begging for Sh10,000. In her defense, the lady in question refuted the claims and piled it to the list of alleged blackmail tacts.

Ochieng told the Milimani Law Courts that he recorded Loitiptip because he (Mbogo) knew shisha-smoking was illegal, as the consumption of the water-pipe tobacco was banned in Kenya in December 2017. The shisha video was recorded on February 12, 2021.

Mbogo told Milimani Chief Magistrate Martha Mutuku on Wednesday that he had in his possession a video of Loitiptip’s partner pleasuring herself in public.

“I did not share that [nude] video on social media out of respect for the senator’s right to privacy,” he said.

Ochieng according to the Senator had threatened to release both videos to the public if he didn’t send him the Sh200,000, he instead reported the letter to police who tracked and arrested him on 15th.

Prior to the arrest, Ochieng and Anwar engaged in wild chat on WhatsApp, the Senator alluded that the accused was sent by his former girlfriend Saumu Mbuvi the daughter to former Nairobi Governor Sonko whom they had a bitter breakup with.

In the conversations, Senator kept on referring to Saumu as bipolar and referred to her father Sonko as ‘impeached imbecile’. Below are screenshots of the conversations Ochieng and Anwar had before his arrest.