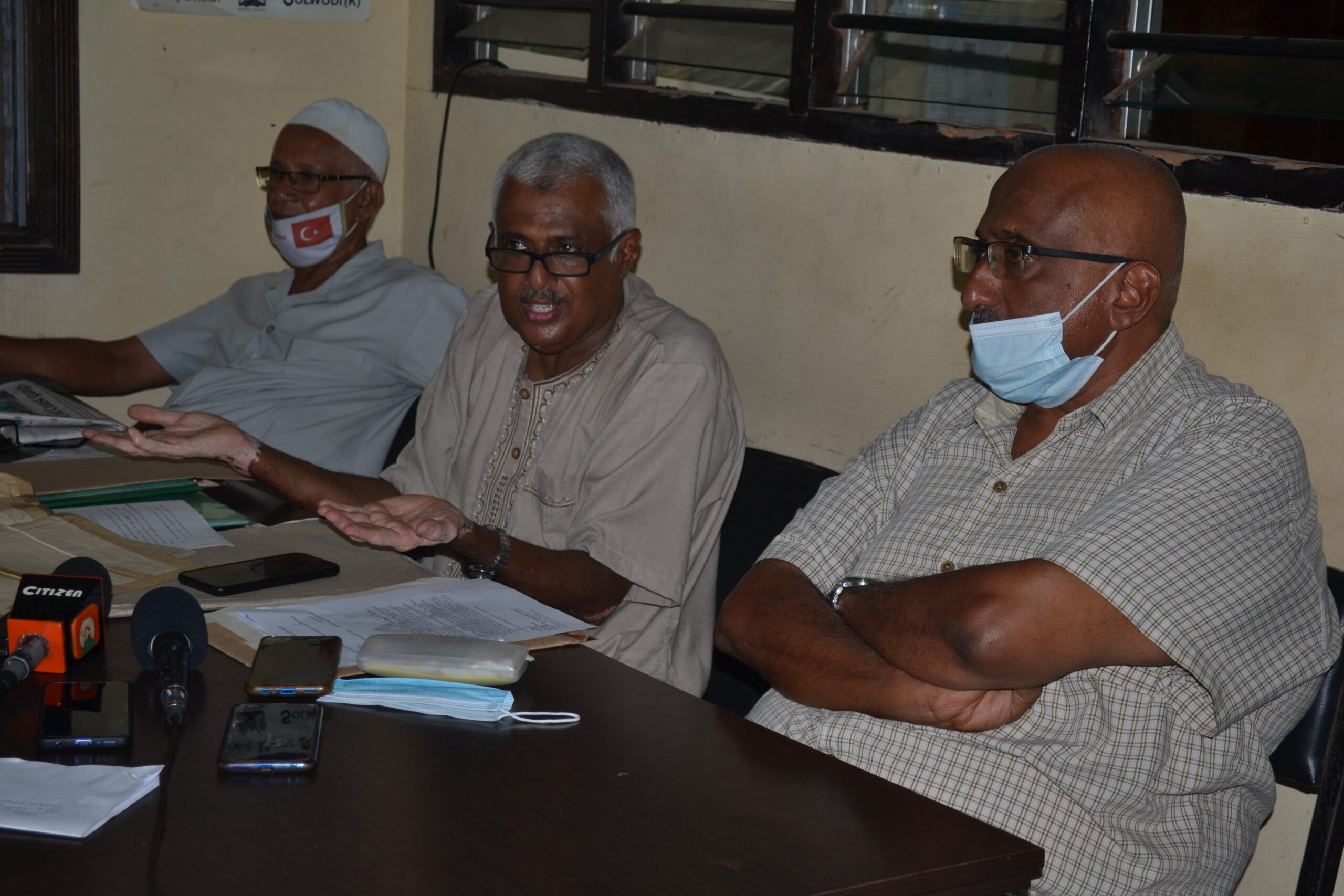 A family in Malindi is living in fear after a portion of their land was invaded and properties worth millions of shillings were destroyed.

The famous Bakshweini family has been fighting to wade off squatters in their 360 acre farm prompting them to sell off part of it.

Several court decisions have been made in their favour but the squatters have continued to invade the land disregarding court orders and rulings.

Mr. Salim Bakshweini, the family spokesman says that his father bought the contested piece of land in 1955 and the family has been carrying out farming activities on it.

He adds that the squatter problem started in the 1980s by people he says were employed by his family and some rented portions of the land but turned against them.

“We used to live peacefully until people we used to rent a section of the farm started claiming ownership and put up permanent houses,” he says.

The incidents resulted in court cases that have spanned over thirty years starting in 1989.

The squatters had moved to court to seek an advanced possession but the family was saved by the numerous documented evidences they produced.

“The squatters were not satisfied with the court decisions all those years and in 2006 they invaded the farm, slashed several animals, burnt buildings and tried to burn me inside my car,” he says.

After all the court cases the family decided on human grounds to cede 58 acres of land to the squatters and through consultation with the National Land Commission (NLC) and the Kilifi County government, the action was sanctioned but still the squatters continued to invade more land.

A document from the NLC dated 7th May 2015 indicated that the commission had allowed the ceding of land to squatters to settle the land dispute.

“The latest search for the parcel confirms that the land belongs to the Bakshuwein family. The family has had dispute with at least six families of squatters with whom have been to court severally,” the document signed by then NLC chairman Mohamed Swazuri states.

It further stated that the Bakshuwein family had offered to forfeit previous and current court costs to the squatters in addition to allocating them land free of charge.

“The purpose of this letter is to convey this amicable solution of the squatters for them to vacate the land as per all the three court rulings and encourage squatters to respect private property as provided for in article 40 of the constitution of Kenya and ensure that the dispute comes to an end,” it states.

The County government of Kilifi also approved the change of use of the agricultural land to residential to settle the six squatter families in a letter dated 6thNovember, 2019 and done by the chief officer lands, energy, housing, physical planning and urban development.

Mr. Bakshuwein said that the family was granted permission to evict the squatters on a 20 acre piece of land, a move that irked residents who protested and blocked the busy Malindi- Sala Gate road on Saturday.

He produced documented evidence to show that the land was indeed theirs and waded off any storm.

The demonstrators invaded a dairy farm of the Bakshuweini’s, burning down a Mosque and stole 138 goats and 10 sheep.

According to Mr. Mohamed Ahmed who works at the farm, about 300 armed people stormed the farm and started pulling down the fence before burning the Mosque and walking away with the animals.

Mr. Ahmed added that their security was now at stake and many employees had already left the farm.

Mr. Samson Charo, another employee at the farm said that he was not sure of his future since the Bakshuweini’s were now selling off the land due to insecurity. 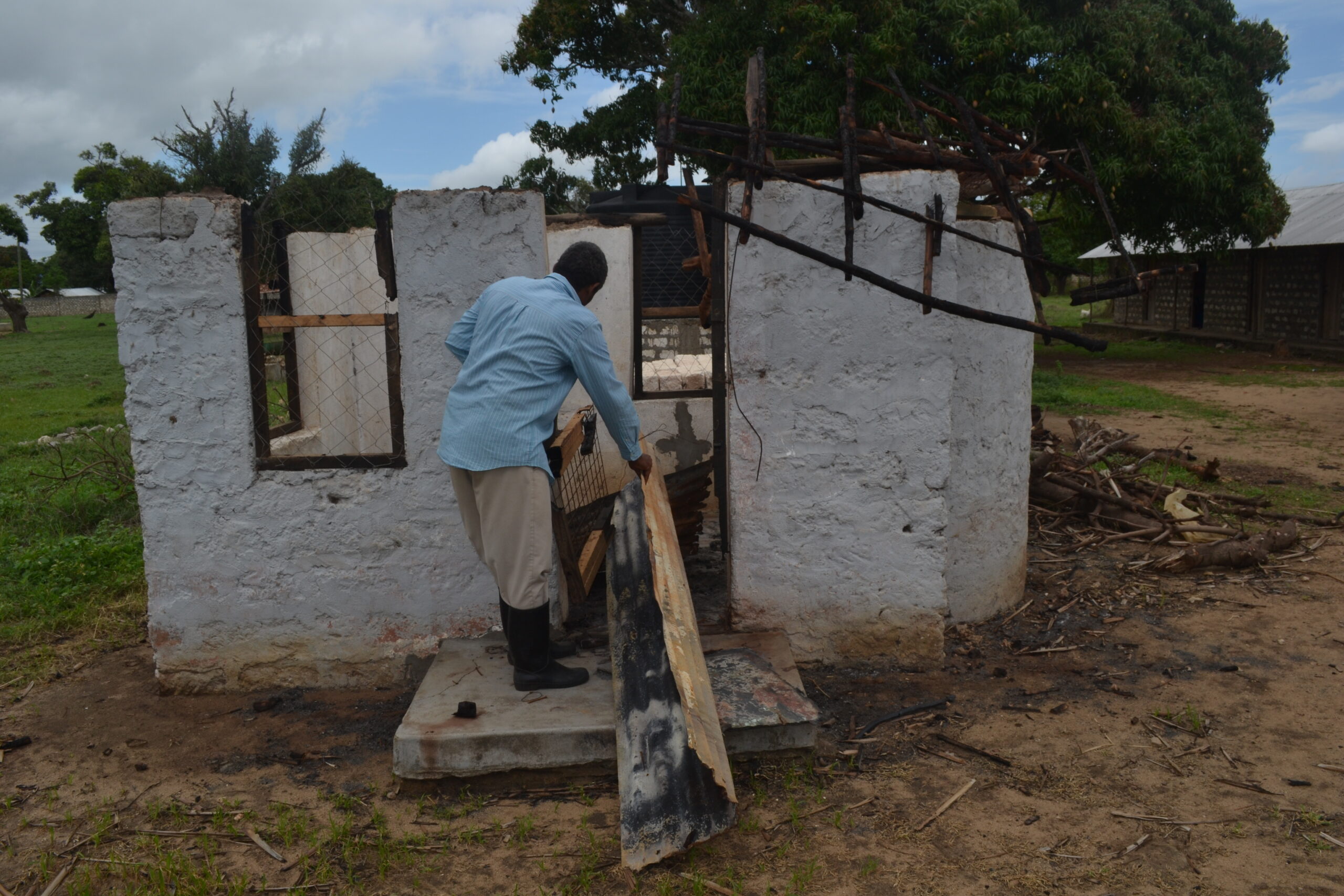 An employee of the Bakshuwein search at a burnt Mosque in the family dairy farm.

“We were 25 employees but since the attack on Saturday the rest left and we have only seven remaining. The government should provide security to investors so that our jobs can be secured,” he said.

Kilifi governor Amason Kingi on his part told journalists that the matter had been brought before him and that several meetings have been done to try and solve the squatter problem in the area.

He said that the Bashuwein issue was a delicate one that needed involvement of all parties to wipe out suspicions.

“The matter is still at the discussion level. I have had several meetings with both sides. There was an agreement that everything stops to give way to negotiations until the matter is solved but I was shocked to hear of the demolitions,” he says.

He added that his government has presented two options to try and solve the matter including giving the squatters part of the land or the government buying the entire land to settle the squatters.

“We are discussing two proposals at the moment and transparency is key so all parties must get down on the negotiation table,” he adds.

He also said that his government was exploring ways where the national government will buy the entire piece of land from the Backshuwein family and settle the squatters to end the impasse the same way it was done with the Mazrui and Waitiki lands.

“The second option is to buy the land in its entirety but we must involve the national government since the process is not simple,” he says.

The Backshweini’s now want the government to provide them security or buy their land so that they can move on with their lives.

“Insecurity and interference by politicians pushed us to sell a huge chunk of our land but still we are not safe,” says Said Bakshuwein.

Kenya Insights allows guest blogging, if you want to be published on Kenya’s most authoritative and accurate blog, have an expose, news TIPS, story angles, human interest stories, drop us an email on [email protected] or via Telegram
Related Content:  Developments In The Suit Seeking Exhumation Of Siaya Covid 19 Victim
Related Topics:
Up Next