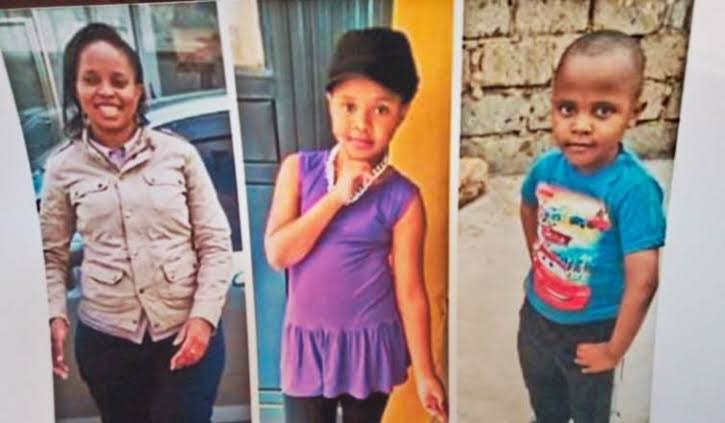 In unclear circumstances, a family of three went missing on the 26th of October 2019. The three, 31-year-old Joyce Syombua and her two children Shanice Maua, 10, and Prince Michael, 5 would later be found dead.

According to family and friends, Joyce who was the separated wife to a Kenya Defence Forces officer Major Peter Mugure, had taken their two children to the Laikipia Airbase ahead of her oldest daughter’s birthday celebrations the day they disappeared.

Elizabeth Malombe, Syombua’s mother claims the relationship between Mugure and Joyce was a rocky one seeing with the major issue being the union not being well received by Mugure’s relatives.

“Peter requested that he needed to spend time with the children after schools closed. He sent Joyce fare and they were excited when they left for Nanyuki,” Mrs Malombe stated.

Mr Mugure, who is the prime suspect in the killings, had asked Joyce to bring the kids to the airbase in Nanyuki where they would celebrate  their daughter’s 11th birthday.

According to last bits of communication between Joyce and family members, Mugure first left with the Kids while Joyce was in the bathroom, in a text message to her friend Syombua Kateng’u, she wrote that when she called him, he said he was taking them on a tour of the facility and would be back. He would later return without them.

At about 7pm, Kateng’u called Syombua who told her the children were yet to return and that Mugure had stepped out. This would be the last time the family of three would be heard from ever again.

Kateng’u, after trying to reach her friend whose phone was now off would then call Mugure – whose number she had been given by Syombua. He informed her that he had escorted Joyce and her children to board a matatu back to Nairobi that night. The three did not arrive back to their house in Kayole. Mrs Malombe reported a case of missing relatives at Soweto Police Station that Sunday

The three bodies were then found 20 days later buried in a shallow grave after the estranged husband led detectives to the site.

Friends and family say the marriage had seen tough times, Mugure had gone as far as denying being the father to the youngest child, leading to Joyce seeking legal intervention for child support. This they say could have triggered the mans alleged actions.

Homicide detectives are now finalising the investigations at the Laikipia Airbase to prosecute all suspects linked to the murder.

It Emerges Chris Msando Had A Son With A UK Woman

Babu Owino Talks About An Assassination Attempt On Him