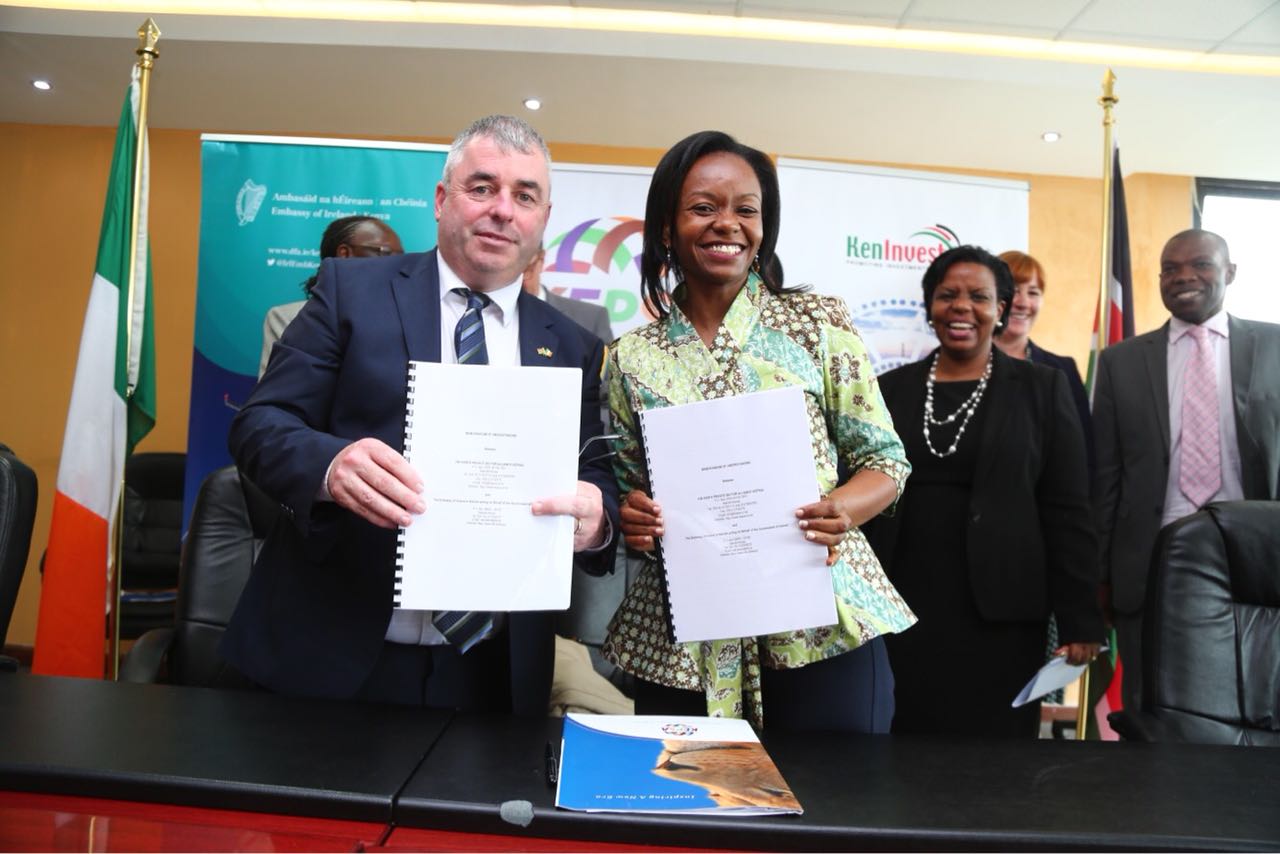 Minister Moran with KEPSA CEO Ms. Carole Kariuki on the successful signing of trade pact between Kenya and Ireland.

For over 100 years, the Irish people have been in Kenya and impacting livelihoods of citizens in various community spaces. Primarily, they’ve engraved their stand in religion and healthcare from back in time. 35 ministers from Ireland were sent across the world to join their citizens and world in celebrating the day. St Patricks Day is Ireland’s National Day. It is a time of celebration for all of those of Irish descent and affinity around the world.

Luckily, Kenya was the only country in sub-Saharan Africa privileged to have hosted one of them. Kevin Moran, minister for public works, was in the country for three days for a series of action-packed events. In a nutshell, he supervised and oversaw several projects the Ireland government through the Irish Embassy under Amb Vincent oneil have been running. His visit was also tuned to further strengthen trade links between the two countries and further positive relations. 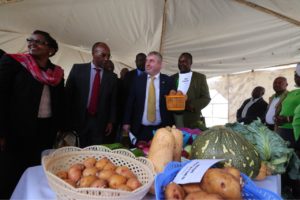 Minister Moran with Nyandarua Governor, Kimemia during the launch of Potatoes project.

In Nyandarua, Minister Moran launches Potato Sector Capacity Building Project that addresses issues on farmer training, market linkages, and production and distribution of high-quality potato seed with a goal of improving yields and farmer revenue. The project is a PPP that involves IPM an Irish seed production company, IFDC an NGO involved in capacity building in agriculture sector, Kevian Kenya, a private company involved in food processing and the Nyandarua County Government. The project will be funded for 3-years by Irish Aid through the Embassy of Ireland and will benefit over 3000 smallholder farmers in Nyandarua.

Minister Moran also held a meeting with key Kenyan trade partners at the Kenya Investment Authority offices to learn of opportunities for deepening Ireland-Kenya trading links and investments. During the meeting, a presentation was made on the work that has been done to develop KenInvest’s One Stop Centre (OSC), funded by Irish Aid through the Embassy of Ireland. The Minister witnessed the signing of a Memorandum of Understanding between the Embassy of Ireland and the Kenya Private Sector Alliance (KEPSA) and the plans for the development of a Trade Compact between Ireland and Kenya in 2018. 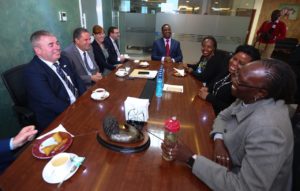 Ireland also has a growing business presence in Kenya, working in close collaboration with Kenyan investors. A business network, Business Ireland Kenya, established with embassy support in 2014, now has over 70 members. BIK members are involved in a wide range of businesses, which include financial services, security, education, ICT services, tourism, construction, and pharmaceuticals.

The Minister also presided over the launch of a partnership between an Irish company, Novaerus, and a Kenyan company, Quintons Pharmacy. Novaerus is an Irish company that develops technology for infection prevention and control through their unique plasma technology air filtration system. Quintons Pharmacy is a Kenyan based company that was incorporated in 2015 and distributes international healthcare brands into the East African market.

During his visit, the minister also visited Mukuru slums in one of the many urban settlement programmes that the embassy is sponsoring in Nairobi. Also looked over Young Scientists Kenya, a programme run by Irish aid and met students involved in this innovative competition. 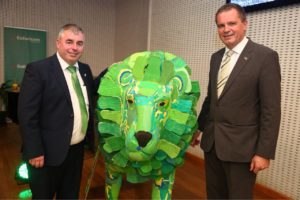 With the Global greening theme of St Patrick’s celebration, Kenya Wildlife Service Headquarters was the highlight of the tour, where the embassy was launching a massive initiative. The St Patrick’s greening event. Ireland ‘Greens’ iconic images all over the world on St. Patrick’s Day. The purpose of Ireland’s Global ‘Greening’ Campaign is to bring attention to Ireland’s relationship with its diaspora communities and also with friends in countries across the world.

Ireland Embassy has been ‘Greening’ the Big Five for the past few years, with Ahmed the Elephant Greened in 2016 and a Rhinoceros Greened in 2017. This year the Embassy was even more innovative by ‘greening’ a life-size Lion. However, this was no ordinary Lion. This life-sized Lion was made entirely from flip-flops that have been washed up on Kenya’s coastline and recycled into a Lion statue.

On his last day in Kenya, the Minister, together with the Chief Guest, Hon. Ababu Namwamba, Chief Administrative Secretary at the Ministry of Foreign Affairs and International Trade presided over the official St Patricks Day Reception which took place at the Irish Ambassador’s Residence.

The trip can be described as a success if we’re to borrow Moran’s own observation that in his entire life in public service, Kenya’s visit was the highlight of his career. He said the welcoming nature of Kenyans charmed him and found vast openings in business that will see the two countries continue tightening their bond.