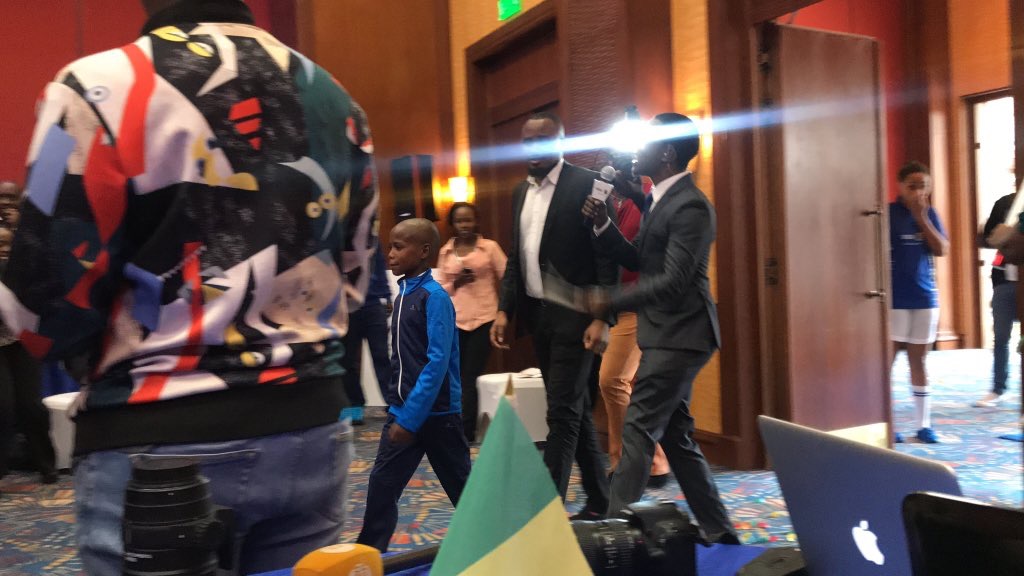 Lawrence making an entrance at the Visa where he was crowned an ambassador.

In March this year while going through his normal duties, Sports journalist, Eric Njiru, cane across a herdsboy with an old T-shirt scribbled with Arsenal’s players Mesut Ozil name on the back. With the nose for news, he thought it would make an interesting story, more so, he saw a poor boy who loved Ozil.

Eric took the photo of the 9-year-old Lawrence Masira wearing the infamous shirt as he herded cattle in the capital, Nairobi and that photo which he later posted on Twitter would make the transformation and change Lawrence’s life forever if not now.

I saw this kid today grazing in the streets of Nairobi – a city without really grass for cows. He told me he loves @MesutOzil1088 so much(You can see his shirt). Maybe one day this can reach Ozil and get a real @Arsenal shirt. pic.twitter.com/ojDbf1Loil

That particular tweet gained so much traction that it went globally viral. It eventually caught the attention of Ozil himself. Working through the journalist, Mesut sent autographed Arsenal merchandise not only to Masira but his entire squad of ten.

While most stories like that would die naturally, it was just the beginning. Barely two months later, Masira has bagged a lucrative deal with Visa.

Lawrence has been named the face of the programme ahead of the upcoming Africa Cup of Nations in Egypt which will officially kick-off on Friday, June 21, and run for close to a month. He’s now the Visa Kenya Player Escort Programme Ambassador.

Together with his mother, they’ll travel to Egypt where the AFCON will be held. He gets to have a lifetime opportunity of escorting even international players to the field. This changes the young boy’s life forever because the ladder will keep going.

We wish him all the best.