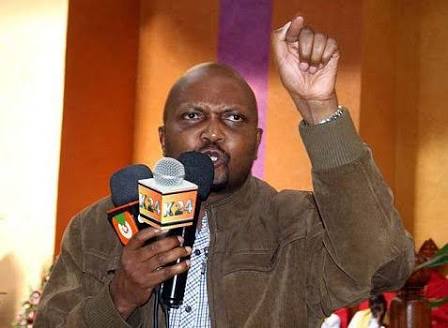 On Sunday night a Twitter fight went up between Gatundu South MP Moses Kuria and Blogger Cyprian Nyakundi, known for his loose mouth, the MP while reacting to a comment the blogger has made telling him off referendum talks, promised to silence him in what seems like direct death threat in plain terms.

The Cyber crimes bill will be passed in the next few weeks. Then leeches starting with you will be put in their place forever. Enjoy for now

Currently, Nyakundi has a defamation case against him by Nairobi Governor Mike Sonko and on this, the MP vowed to deal with in a manner unrelated to Sonko’s. Kuria boasted of having silenced others who couldn’t speak for themselves insinuating they were dead leaving trails that should concern authorities as to who these people he’s talking about and his contribution to their deaths.

The last time Kuria was largely questioned on a death though not by police but the public court was during Chris Msando’s death where his posts were of serious concern.

Its not an insult. Its something you ought to take very seriously. I will not take you to court

Moses Kuria’s outburst and threats issuance come barely days when the president signed into law the cybercrime bill which criminalizes activities and reckless posts such as the ones made. Ironically, Kuria was one of the key proponents of this law that was drafted to tune safe conversations.

Because you are too small for this law. You choose your enemies wisely small boy

Do you think he broke any law and that he can possibly be prosecuted? Far-fetched and knowing how things run in this country, this will just cross like many other posts. However, being a matter that touches on one’s life being under threat, Cyprian must report the matter to the police even if nothing will be done.

You are trending on a banana skin my friend. I would refer you to others but unfortunately they cant tell you any tale

Related Content:  Dadaab’s Broken Promise: New Report Criticizes Closure of World’s Largest Refugee Camp By Kenyan Government
Kenya Insights allows guest blogging, if you want to be published on Kenya’s most authoritative and accurate blog, have an expose, news TIPS, story angles, human interest stories, drop us an email on [email protected] or via Telegram
Related Topics:
Up Next

Man Receives Sh40,000 Mistakenly Sent To Him Via M-Pesa, What He Did Next Was Unexpected Honesty has become