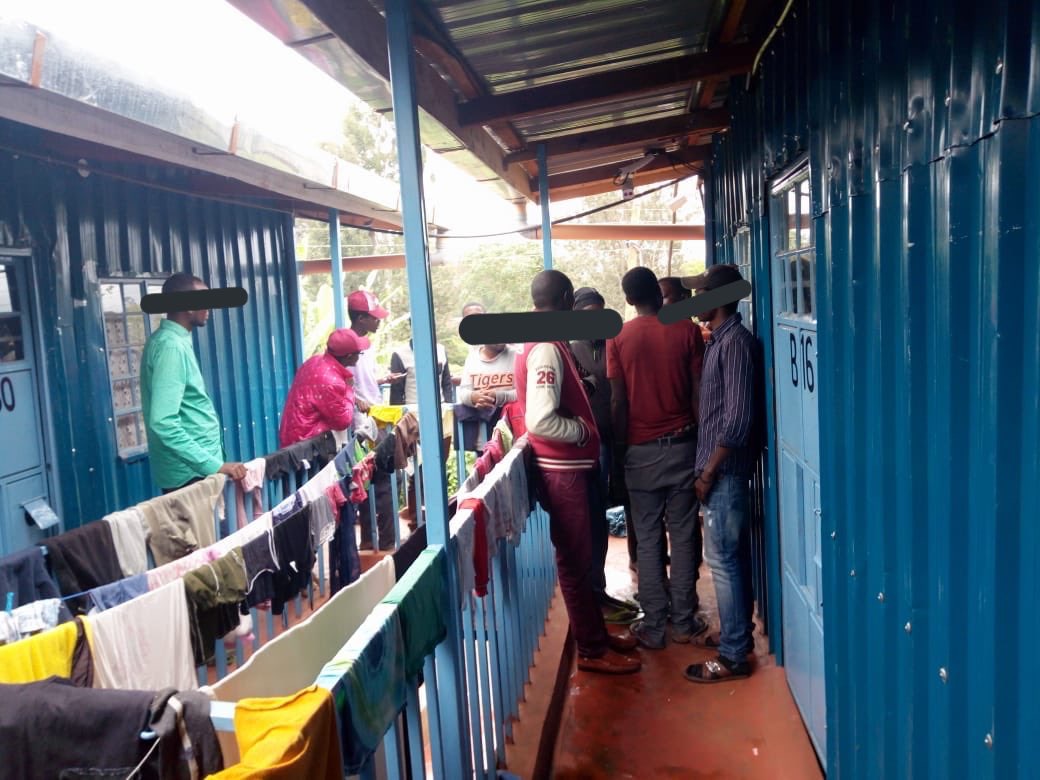 Stranded members of the group after being given eviction notice.

Great Lakes leadership stated that the Landlord had sent an Agent at 1:00 PM with immediate notice to vacate the premises by 4:00 PM. The action is a clear violation of the Tenancy Agreement from PATAYA PROPERTIES Item 11 “Should a tenants character be deemed undesirable, he/she will be evicted from the house. A notice of one month shall be given in advance.” 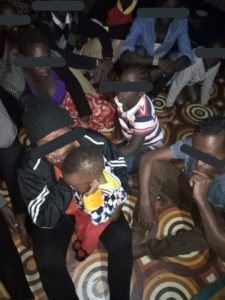 Part of the refugees.

Deep in the Kangemi area of the informal settlement in the west of Nairobi, RefCEA’s Executive Director Jacob Ssekitto and Advisory Board member Michael B. Clark had previously visited the compound and found around 76 people living in 6 rooms measuring 2 meters by 2 meters, sharing 3 or 4 to a single bed.

Great Lakes leadership pled with the Landlord to give them time to leave as many women in the group have children, and it is not reasonable to expect any group of 76 people to pack all belongings and leave without notice. The Kangemi Chief then joined the interaction and allegations were made that the group is cursed, that LGBT are not wanted here, and that they are spreading disease. They were notified that the police were being summoned and a crowd of onlookers gathered.

Assistance to mediate the conflict was requested and Jacob Ssekitto, Director of RefCEA travelled to Kangemi. En route, promised that no police would be summoned until he arrived. When he did so at 5:42 PM he was able to negotiate an extension on the eviction for two days, with orders to vacate by Wednesday, 12 June 2019. 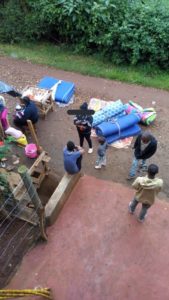 Group thrown out by landlord.

Unfortunately, several residents had already started to vacate in an attempt to shelter before nightfall. The surrounding mob was still present, and the LGBTQI refugees were heckled, spat upon, and one man was stoned and beaten by the crowd until he was pulled to safety. Mr. Ssekitto instructed all Great Lakes residents to immediately return to their rooms, and guards were posted at the doors.

The population is predominantly originally from DR Congo, however those we spoke with included countries of origin including Burundi, Rwanda, South Sudan, Uganda, Tanzania, Somalia and Ethiopia. We did not yet conduct a census but roughly the residents are 14 lesbians, 10 children, 20 transgender women, one intersex and the remaining gay and bisexual men.

The situation is indicative of the greater failure by the Kenyan government and UNHCR services to adequately provide for LGBTQI refugees in the region. Very few are receiving any form of financial assistance, medical care is impossible due to the cost of transportation and fear of using the local medical facilities. Many identifying as transgender stated they have not left their rooms in several months. Anti LGBTQI violence is the norm, and housing discrimination is common and permitted without any method of recourse.

“All LGBTQI refugees in Kenya are living in less than optimal conditions. However, the conditions for this group are among the worst I have seen, ever. The situation is dire. The Refugee Coalition will work with local and international partners over the next two days to secure funding for safe housing, transportation, security, and food. It is estimated that we will need 6 houses to hold 12 people each, at an estimated cost of 580,000 KSh /  $5,800 USD by the morning of Wednesday 12 June 2019 to ensure all Great Lakes LGBTQI refugees are evacuated to safety.” – Michael B. Clark, RefCEA Advisory Board.

Related Content:  Guyo Raids City Hall With Goons Hunting For Speaker Elachi As Power Tussles Escalates
Kenya Insights allows guest blogging, if you want to be published on Kenya’s most authoritative and accurate blog, have an expose, news TIPS, story angles, human interest stories, drop us an email on [email protected] or via Telegram
Related Topics:
Up Next