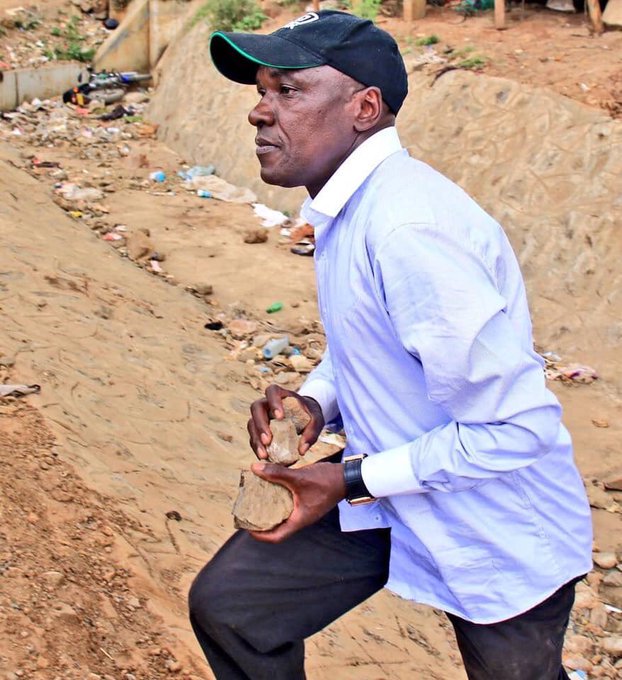 Dr. Khalwale an unemployed Vet turned political mouthpiece broke the internet on Thursday and photos of him holding stones went viral after he bravely engaged rowdy Kibra youths in a daring stone-throwing battle.

#KOT is always lively. #KhalwaleChallenge should get HSC.
As the movement gets stronger. pic.twitter.com/PtFyVMLQ5l

Dr Olunga through his Twitter handle on condemned the ex-senator’s desperation on government’s reluctance to employ all doctors hence resulting to such immature stunts from some of their members.

It is very disheartening the humiliation our government puts Medical Drs through.

This is the reason @kmpdu keeps advocating that the Kenyan Govt must employ all doctors in order that every Kenyan has access to medical care & that they are not driven to such illicit activities. pic.twitter.com/G4JRNHJBlW

The KMPDU boss, however, found himself on the receiving end after netizens trooped to his page and chastised him for affirming every medic including those whose actions were utterly uncalled for.

Dr. Bonny Khalwale has never bothered reaching out to Kenyan Govt for employment he prepared his own bed and hes lying on it why worry about him he's doing much better out there this are just mere side shows

Can witchdoctors also join @kmpdu ? They provide very essential medical services especially in the rural areas where there's no access to modern medical services. Asking for a witch doctor friend.

In his responses, Dr Oluga bolstered it was his responsibility to defend all doctors in all circumstances as he has always done.

Why? @KBonimtetezi really was a strong advocate for doctors at the Senate.

One of the only Senators who constantly championed Health Service Commission.

I speak for all doctors in Kenya. Even the ones who may not know how to use their positions in national assembly, senate or government to correct the health system challenges.

Related Content:  Pope Francis Appoints Archbishop Philip Anyolo As Archbishop of Nairobi
Kenya Insights allows guest blogging, if you want to be published on Kenya’s most authoritative and accurate blog, have an expose, news TIPS, story angles, human interest stories, drop us an email on [email protected] or via Telegram
Related Topics:boni khalwaledr ouma olugaKibraKMPDUKOTWilliam Ruto
Up Next

Malindi MP Aisha Jumwa In Trouble Over Sh58M She Embezzled