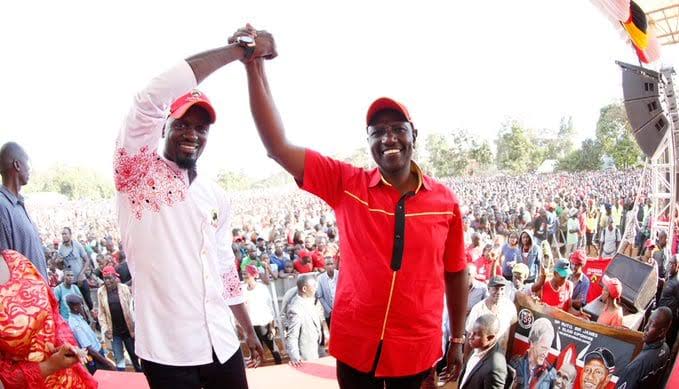 Deputy President William Ruto has locked out his Jubilee team from that was working with McDonald Mariga in the recently closed Kibra poll which he came in second from his Karen home.

This reprimand as Kenya Insights has learned, has gone as far as seeing Ruto cancel a meeting scheduled on Thursday evening at his Karen residence.

The lieutenants were supposed to record a win or at worst a loss by a very small margin in a by-election that went down as one of the most expensive mini polls in recent history pitting Ruto against ODM leader Raila Odinga.

The Deputy President was infuriated after spending so much time, energy and resources on the campaigns only for the Jubilee Party candidate McDonald Mariga to garner only 11,280 votes against ODM’s Bernard Okoth’s 24,636 votes.

According to anonymous sources the plan had been that they “supervise the polls” then move  to his residence for a post-mortem analysis, but he cancelled on them in disappointment.

After the defeat, Ruto, In an attempt to downplay the loss, he later tweeted, “Pongezi (congratulations) Benard Okoth for Kibra. Congrats Mariga, Team Jubilee & supporters for daring the so called ‘bedroom’, braving the chaos/violence to double our vote from 12 per cent (2017) to 26 per cent now. Our competitors came down 78 per cent (2017) to 52 per cent. They retained the seat we have served notice.”

Mr Ruto however could not hide his disappointment with some Jubilee Party officials who failed to support Mr Mariga’s campaign.

Kenya Insights allows guest blogging, if you want to be published on Kenya’s most authoritative and accurate blog, have an expose, news, story angles, human interest stories, drop us an email on tips.kenyainsights@gmail.com or via Telegram
Related Content:  KNH Doctors Reject ‘Dog Food’ Sent To Them By Sarova Hotel
Related Topics:
Up Next