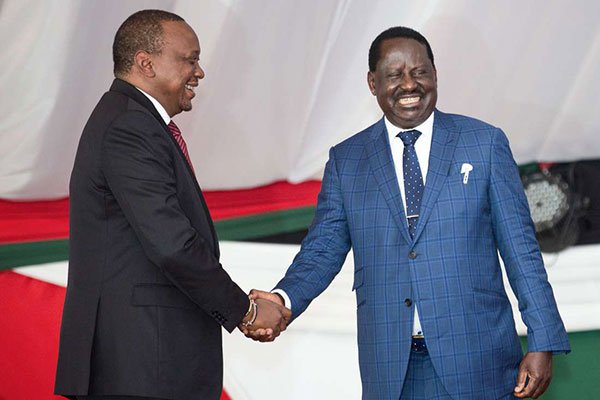 A detailed report from the Building Bridges Initiative (BBI) members that have since officially sought an appointment with President Uhuru Kenyatta and AU Representative for Infrastructure and development Raila Odinga to hand in the official final report before 20th of October.

According to sources close to the team, other than proposing a shift to the parliamentary system of government, the BBI team suggests that some counties be merged in what may attract resistance like what has befallen the Punguza Mizigo by Ekuru Aukot’s Thirdway Alliance that has seen at least 14 county assemblies thwack it on the grounds it seeks to reduce the number of elected representatives.

Mr Yusuf Haji, the BBI task force chairman, said they were working to complete the task ahead of the October 23 deadline and are now waiting for the president’s word on when to submit the report.

“The secretariat completed all the editorial work on Friday and we are good to go. The team is proud of what it has accomplished and we hope that the report will help the President and the former Prime Minister (Raila Odinga) achieve the vision they have for the country,” said Mr Haji.

Harambee House, where the March 9, 2018 handshake was affixed is the preferred venue for the handover ceremony as BBI team remains hopeful that both President Kenyatta and Mr Odinga will be present to receive it.

However, the Chair had this to say about the handover ceremony that is yet to be dated. “Announcing the venue would expose us to infiltration,” Mr Haji said.

The team was mandated to tackle nine agenda, including how to end ethnic antagonism, lack of a national ethos, how to foster inclusivity, strengthening devolution and curing divisive elections. The report has also highlighted on enhancing safety and security, eradicating the runaway corruption in government, enabling shared prosperity and entrenching rights and responsibilities.

Last week, High Court Judge Weldon Korir dismissed a petition filed by Moraa Gesicho on the basis that she had not demonstrated how she would suffer prejudice were the report to be submitted to the President. The petitioner contended that the team was not constitutionally established.

Mr Paul Mwangi, one of the BBI co-secretaries, said the final document is a product of extensive public participation and consultations that saw them go to all the 47 counties, 210 constituencies and 1,500 civic wards in town-hall meetings.

“We engaged with a total of 82 national institutions and persons, including Speakers of the bicameral Parliament, the Chief Justice, all constitutional commissions and independent offices. This is a rich document that captures the views and aspirations of the people on what ails the country with the remedial measures,” Mr Mwangi said.

While both Mr Haji and Mr Mwangi avoided talking about the contents of the document, there have been reliable leaks from within the team that they chose not to recommend a referendum as a way of changing the Constitution to re-introduce the position of a powerful prime minister, among other landmark changes to a New Constitution that was promulgated in August 2010.

Raila Odinga, Uhuru’s close buddy right now has previously stated that the country would likely have a referendum to alter the executive structure to eliminate ethnicisation of state power while Deputy President William Ruto remains the main opposer to a referendum citing that its a plan to create more seats for greedy wealthy individuals and has no intention of helping Kenyans.

After a year and a half, it will be a total waste of time if indeed the report that will soon be tabled to have the very same contents of the leaks we have seen so far.  It will be a waste of public funds too to spend cash for a year plus on things that can be settled by a simple task team in a few weeks. I might be wrong or right, but this remains my opinion. BBI was a political initiative that is already biased from the start, though unreleased, the report has to be, rather is already partisan or let’s say, supposed to be pro handshake.

Related Content:  Uhuru Rejects ICJ Verdict, Vows To Protect Kenya’s Territory By All Means
Kenya Insights allows guest blogging, if you want to be published on Kenya’s most authoritative and accurate blog, have an expose, news TIPS, story angles, human interest stories, drop us an email on [email protected] or via Telegram
Related Topics:BBIRaila OdingaUhuru KenyattaWilliam Ruto
Up Next