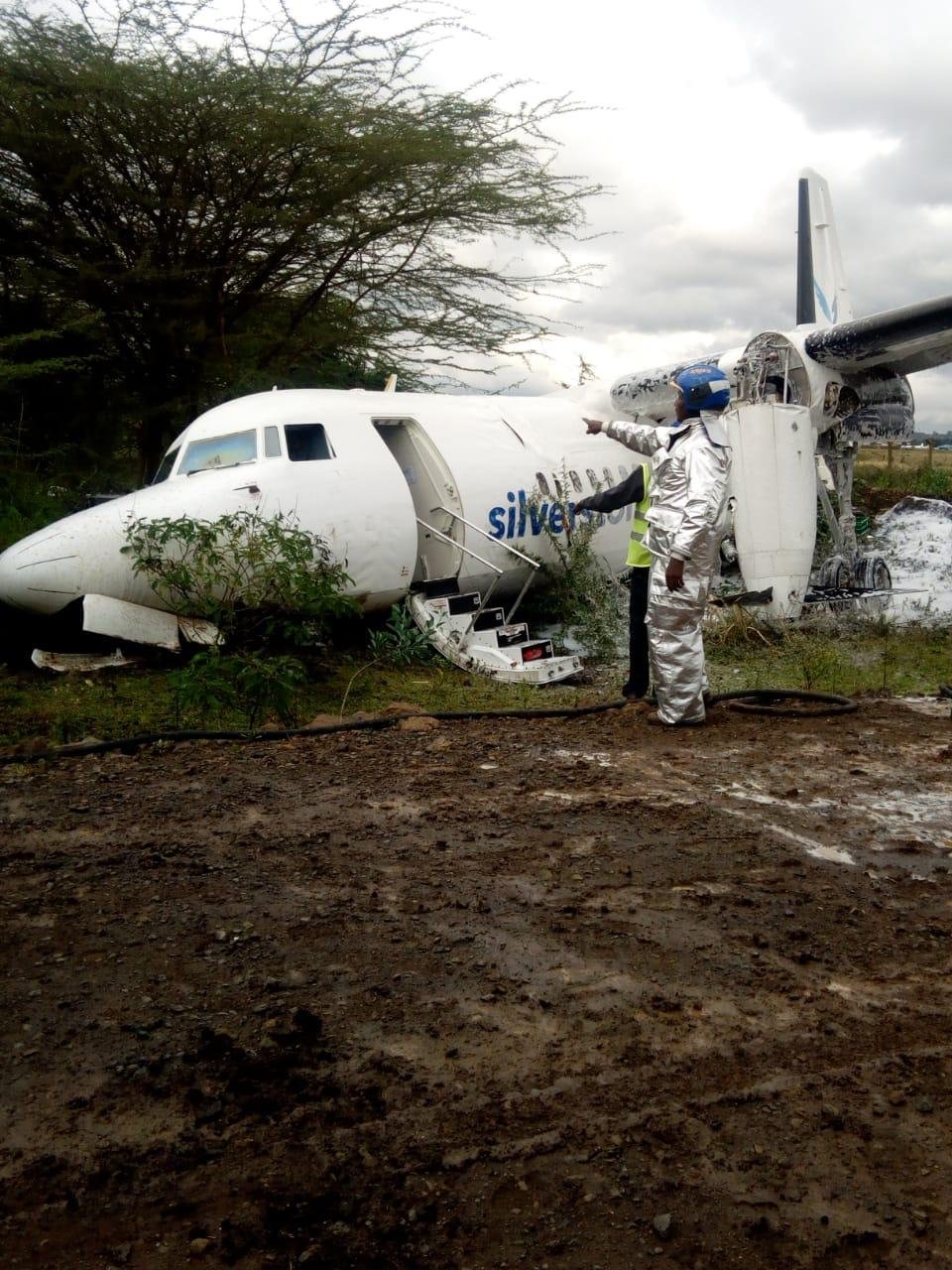 A passenger plane operated by local airline Silverstone Air on Friday, 1morning skidded off the runway at Wilson Airport in the Kenyan capital Nairobi.

Witnesses say the craft lost its way during take-off to the coastal city of Mombasa.

Images circulated online from the scene showed that the Fokker 50 aircraft plunged into a thicket, hitting some trees and breaking part of its wing, before being grounded, tilted to one side.

The Silverstone plane had 55 souls on board; 50 passengers and 5 crew members. 2 passengers were slightly injured and received  medical attention.

Below are some of the reactions and complaints from Kenyans on  Silverstone Airline.

Thoz tuthings Silverstone Air operates are the most dangerous things after kushikwa ukiwa na bibi ya mtu. Boarded one to Lamu last year & never had such a bumpy rough ride nearly wet my pants.

Three weeks ago, i was onboard silverstone air,Ukunda to Wilson with my family.I did not like how the plane landed at wilson.We kinda bounced on our landing.something should be done on that runaway#WilsonAirport

There has been numerous complains regarding the aircrafts operated by Silverstone Air.. Basically they are old and unworthy to fly anywhere in the world. But with corrupt people like Kibe at the helm of KAA, we expect more of this!

Result of a rejected T/O at high speed. Glad that al crews and pax evacuated safely from this Silverstone plane. pic.twitter.com/qs7XlUeqOk

Flying silverstone is like agreeing to commit suicide. This company is openly mismanaged with the most poorly maintained fleet. @RobertAlai has a whole story on his timeline from a while back. Since then, I only see Akothee trying so hard to market this wreckage. pic.twitter.com/vpDoN02MPE

I still have never recovered from the scares I got flying with Silverstone. First and last time.

This Silverstone Ma3 has to be stopped I can never fly in this thing again, after a bad experience earlier this year..??

I said it and will say it again Fokker planes are not safe for the skies. Just look at the statistics of how many are flying around the world, less than 50. Quick recovery to all injured passengers onboard thr Silverstone flight enroute Lamu via Mombasa.

Those Silverstone aircrafts are worse than javs

Silverstone is like those Kayole buses, the lowest tier, don’t risk your life coz I’ve heard enough complaints from that airline

What is this? Who authorised the operation of this Silverstone shitty aircrafts. Soon many people will die due to selfish desires. Look at what happened at Wilson Airport pic.twitter.com/6KGksSThvr

I said this is August especially for those #Fokker50 planes out of Wilson Airport. If you've been in one, you know they are a mess. #Silverstone were using them too https://t.co/ryNuroITHN

Silverstone aircraft headed to Lamu crashes at Wilson Airport shortly after take-off, several passengers injured. I have been exposing the unsafe state of the Silverstone Aircraft but KCAA DG Kibe is always bribed to look the other way. pic.twitter.com/AlmzuEsYil

October 2018 tweet on Skyward and Silverstone. Exactly one year later, it happened. Apart from the risk to passengers on board, the smuggling of contraband into the country through Wilson is crazy!!!

One day they will smuggle worse things. https://t.co/101PKzNemx

Silverstone is one of the shittiest companies right now. Those motherfuckers overloaded the plane running on a small strip in Wilson Airport. The media is doing PR to the airline!!

I remember the week the ETHIOPIAN AIRLINE crashed, we were up in the clouds & it wasn't a rainy season. The silverstone plane we were aboard was so unstable that we had to hold each other tight

I gave up on Silverstone air when we had to go back to Nairobi mid flight coz there was no cabin pressure in the aircraft ??‍♀️

The reality is, Silverstone Air , Skyward air are poorly serviced. They are always overloaded with Miraa….KCAA is aware of these but nothing happens. Prove it by visiting departures early morning. Overloading is the biggest problem at Wilson Airport pic.twitter.com/9dAxBPNzar

Silverstone Air is the local version of Air Arabia. Turbulence while in that plane will last an indefinite period and the anxiety plus frustration that comes with accessing their stowage is unmatched .

@CAA_Kenya are you aware Silverstone Air , Skyward Air usually overload their planes? Are you aware maintainance of the planes is poor, very poor? Your officers are usually bribed to turn a blind eye on this but you see the returns? Otherwise suspend operations of the airline pic.twitter.com/lt3yNbftS4

Had a pretty bad experience with Silverstone air one flight from Mombasa to Nairobi. The way the flight was flown jamani…scary.

One thing I said about these aircrafts is that they will kill many people. These small airlines at Wilson Airport are a national security risk. Someone is waiting for people to be killed.

I was on board @silverstoneair in the morning at 7:15am – Eldoret & met some of the passengers on that flight to Mombasa. The runway was very wet but what struck me was the potholes. Our pilot was literally dodging them as we taxied. We hit two of them hard #WilsonAirport pic.twitter.com/U8WKH8rsg1

Related Content:  Police Impersonation And Their Public Relations
Kenya Insights allows guest blogging, if you want to be published on Kenya’s most authoritative and accurate blog, have an expose, news TIPS, story angles, human interest stories, drop us an email on [email protected] or via Telegram
Related Topics:
Up Next

Being A Loyal Citizen And A Foreigner In Qatar