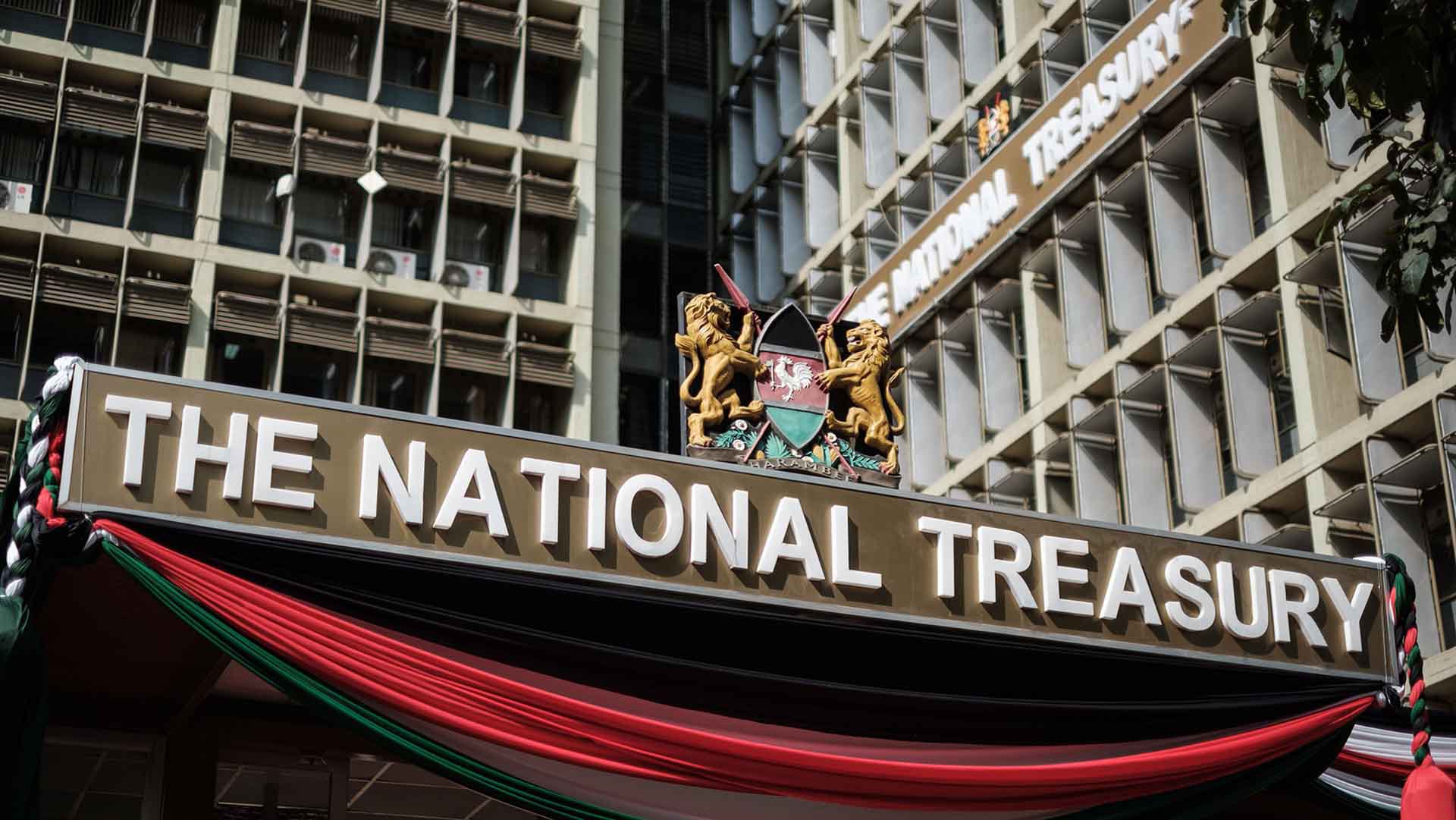 A Kenyan real estate firm with ties to the Chinese government evaded tens of millions of dollars in taxes by making fake loans and “fictional” imports to businesses in Mauritius, one of Africa’s most notorious tax havens, according to an audit by the Kenyan government.

Afrigo Development Co. Ltd. disguised more than $200 million with the help of bankers and other professionals, the Kenya Revenue Authority found in the 2021 audit. “Money is made in Kenya and routed through a series of phantom entities and transactions,” the tax office wrote, accusing Afrigo Development Co. Ltd. of making payments through Mauritius “with the hope that the money will be bleached white.” In total, the tax office fined Afrigo more than $24 million in taxes and penalties.

The audit and other records were obtained by the International Consortium of Investigative Journalists, which in 2019 published the Mauritius Leaks investigation, revealing how the island nation of 1.2 million people spent years attracting corporations with business in Africa that want to pay fewer taxes to some of the poorest countries in the world.

“The case illustrates clearly that Mauritius has set up itself as a hub for the flow of illicit money from African countries,” said Alvin Mosioma, executive director of Tax Justice Network Africa.

Afrigo did not respond to requests for comment. As of last month, the company had not paid the taxes and penalties, according to correspondence seen by ICIJ that described the sum as “outstanding.”.

In 2017, Afrigo obtained permission to build a business and dining complex on the outskirts of Kenya’s capital, Nairobi. The development, which sits next to a donkey sanctuary, includes a conference hall, basketball court and green spaces, according to the environmental impact assessment.

In 2018, a local neighborhood association failed to stop the development in court, arguing Kenya’s environmental agency approved the project in secret. The development went ahead despite a separate judge in 2021 finding the development and others nearby “adversely affected the environment.”

Last December, the KRA completed its probe of Afrigo, identifying four suspicious companies in Mauritius without any apparent employees or permanent office address. One company, the tax office said, was promptly closed “after achieving its intention of siphoning money out of Kenya.”

The four companies identified by the Kenyan tax office list Beijing resident Guo Quing as a director, according to Mauritius public records. Someone with that name is the deputy general manager of a major railway project in Kenya being built by China Communications Constructions Company, one of the world’s largest construction firms and owned by the government of China.

Over years, the Kenya Revenue Authority found, CCCC paid more than $205 million to Afrigo Development Co Ltd. and other related Mauritius companies in “sham or circuitous transactions” and “fictional” imports.

Individual invoices seen by ICIJ show CCCC paid more than $8 million between 2018 and 2020 to shell companies tied to Afrigo. The companies, which the KRA alleges had no “physical presence other than a mailing address” in Mauritius, received millions of dollars for royalties and to produce studies on train tunnels and concrete, invoices show.

CCCC, Guo Quing and representatives of the Mauritius companies did not respond to requests for comment. 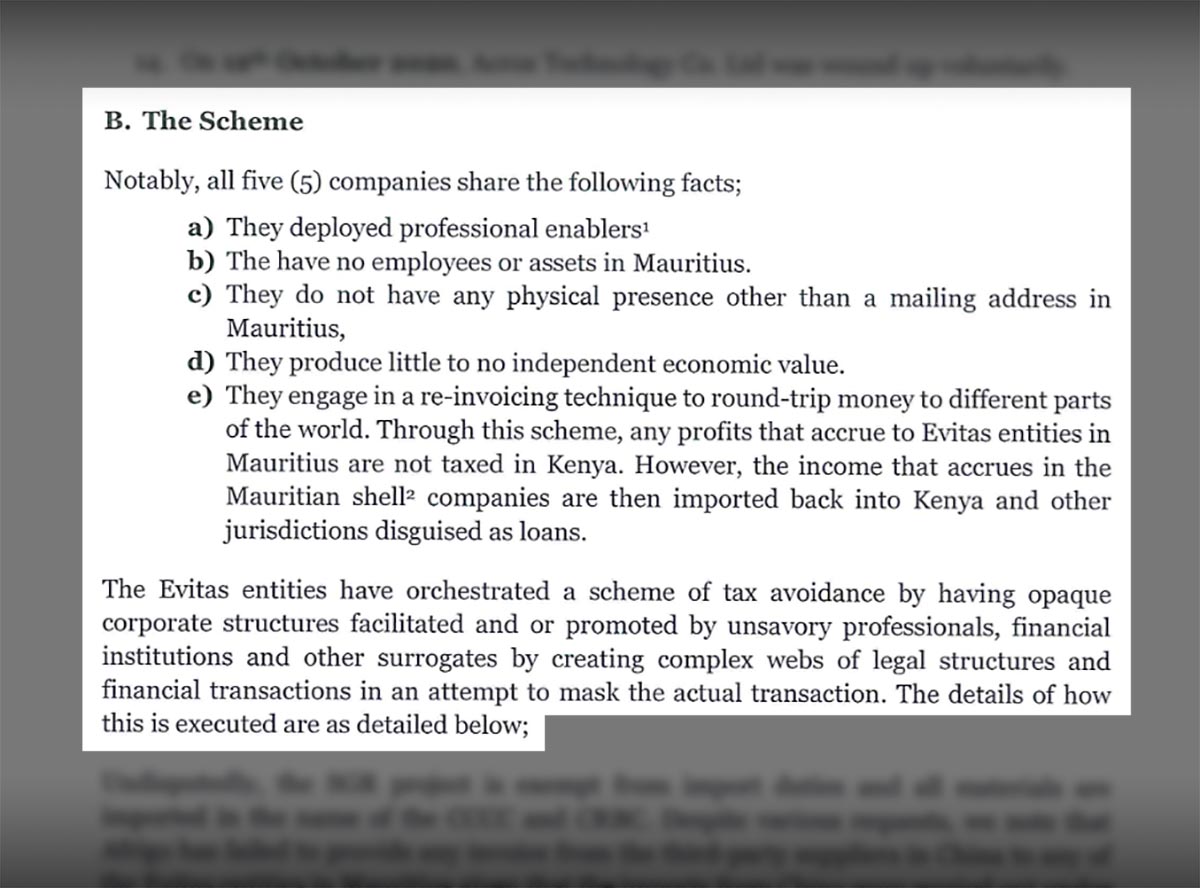 A 2021 Kenyan government audit describes entities incorporated in Mauritius that were involved in a complex tax avoidance scheme by Afrigo Development Limited.

In its audit, Kenya’s tax office also targeted bankers and enablers who helped Afrigo and other companies create and profit from a legal façade. Afrigo “orchestrated a scheme of tax avoidance by having opaque corporate structures facilitated and or promoted by unsavory professionals, financial institutions and other surrogates by creating complex webs of legal structures,” the KRA wrote.

Related Content:  Much Of Maize Reserved At NCPB Is Contaminated With Aflatoxin

One enabler identified by the KRA was Standard Chartered Bank in Mauritius, which operated bank accounts for the shell companies. Another was Kim Fat Ho Hong, the managing director of SCI Essell Associates, a Mauritius offshore specialist firm that served as the local representative of Afrigo and other companies.

Standard Chartered and Ho Fong did not respond to questions.

The Kenyan probe of Afrigo comes as governments in Africa and beyond promise to further stem tax dodging. “We cannot…be complacent by failing to deploy our armory against Evitas’ entities tax abuses,” the tax agency wrote, referring to one of the four Mauritius shell companies.

Mauritius, which for years advertised itself as the “Gateway to Africa,” has long enticed corporations doing business in Africa to set up shell companies on the island. Mauritius offers companies secrecy, low tax rates and a network of bilateral treaties that critics allege allow profitable corporations to avoid paying taxes in some of the world’s poorest countries. The government of Mauritius denies the island nation is a tax haven.

In 2019, following ICIJ’s Mauritius Leaks investigation, Zambia, Senegal and Lesotho tore up treaties with Mauritius, arguing the agreements allowed corporations to avoid paying taxes where the money was made, benefitting from Mauritius low tax rate. Senegal alone estimated it lost $257 million over 17 years due to tax avoidance through the treaty with Mauritius.

Kenya Insights allows guest blogging, if you want to be published on Kenya’s most authoritative and accurate blog, have an expose, news TIPS, story angles, human interest stories, drop us an email on [email protected] or via Telegram
Related Content:  DCI Cautions Kenyans Against Online Transactions, This What To Do
Related Topics:
Up Next