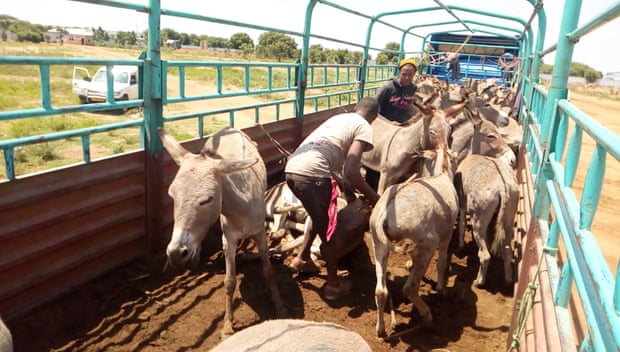 The annual increase in the number of donkeys slaughtered and commercialization of its products without structured interventions is likely to disrupt livelihoods in the African Region. A regional meet bringing together over 15 countries identified Kenya as the largest exporter of donkey products as Nigeria discusses a Bill to ban the slaughter of the animal and related export trade.

This will further affect them even more following global demand for donkey meat and skin thus resulting in a lot of illegal trafficking and theft of donkeys.

About 360, 000 donkeys have been slaughtered in Kenya between 2016 and 2019 affecting 36, 000 households and denying them a livelihood according to an International Animal Welfare Organization Brook East Africa, skin trade is a global issue and a crisis in Kenya.

Speaking during a Donkey Skin Trade Conference in Nairobi, the Brooke East Africa Regional Director (RD), Fred Ochieng said although donkey population in Kenya has grown from 1.8 million in 2009 population census to 1.96 million during a census carried out by the Ministry of Livestock in 2016 providing a growth of 1.04 percent, the rate at which the donkeys were being slaughtered is worrying.

“Our biggest concern now is the slaughter rate which stands at 5 percent of the population, meaning we are slaughtering our donkeys at the rate of five times the rate of production and that means that it is not sustainable,” he said.

A recent survey showed half the world’s donkey population could be wiped out in the next five years, as millions are slaughtered for their hides to meet rising demand for a traditional Chinese medicine. China demands about 4.8 million donkey skins annually for manufacture of ejiao, a Chinese traditional medicine.

Ochieng noted that continuing to slaughter donkeys at the current level would see them extinct, adding that research already shows that by 2023, we actually may not have a single donkey if we continued with the same trend.

He explained that the largest market for donkeys from Kenya is China who managed to generate Sh.1.72 billion from the meat products of donkey last year and although they did not declare what they got from the skin, research approximates that it generated probably around Sh.15 billion.

“What they paid to the government as tax is only Sh.79.9 million which is 0.4 percent and is quite low while the owners lost over Sh.28 billion. When you consider only 25 percent of the animals were slaughtered, it shows that this was a big loss to the community.

The RD said there was no economic standpoint on the figures and no economic argument could support the slaughter houses in place in the country since the country is losing more than it is gaining from the Chinese market.

Ochieng therefore said that the banning of slaughter houses in countries around the region should be a challenge for the Kenyan government to go ahead and ban the slaughterhouse in place as the trade was not sustainable.

“In licensing the slaughterhouses, one of the conditions attached to the licensing was for them to have their own breeding farms but we know there is no breeding taking place thus far and even if they wanted to, we doubt whether it can meet the demand,” he noted.

The government should come out and ban the trade of donkey and also crack down on smuggling of donkey from the neighbouring countries, he said, adding that donkey owners from Ethiopia, Uganda, Tanzania have also been affected by slaughterhouses located in Kenya because of the smuggling going on across the borders.

He explained that many of the African countries from West Africa such as Senegal, Burkina Faso, Uganda and Botswana have banned the trade and it was only Kenya that was at the epicenter of this trade and it was affecting everyone in the continent.

The Brooke Global CEO, Petra Ingram said there was a global crisis on the donkey trade but said the crisis was much more in Kenya because of the licensing of the slaughterhouses.

She accused the Chinese, who could not be able to produce their own hides thus looking for market in countries such as Kenya where around 1000 donkeys are slaughtered every day.

“For the last three years, we have seen the population of donkeys reduce by over 300, 000. That’s why there is a crisis in Kenya and the region. Communities are crying, women now have to carry water for their family’s needs, people are becoming destitute because of illegal slaughtering of donkeys. This is unacceptable,” she said.

Ingram said Brook Global wants to work with governments to find solutions but this, she noted, could only be done if the illegal trade is banned, stopped and slaughterhouses closed.

She explained that abattoirs maybe making money, giving many jobs but when one looks at the statistics where a donkey earns a family Sh11, 390 per month, the math would not work and one would therefore find that the loss of the donkey outweighs any gain caused by the slaughterhouse and the trade.

Because of the demand for the donkeys, Ingram said most farmers were losing their donkeys to theft, short term cash gain and illegal smuggling from neighbouring countries and this contributes to family’s living in abject poverty.

Dr. Monicah Maichomo from Kenya Agricultural Livestock Research Organisation (KALRO) said sustainability of donkeys was a big challenge when it comes to trade considering that as a country, we have not put in mechanisms to sustain the supply.

“Currently, we might not know the number of donkeys we have from the previous research which showed 1.9 million donkeys because of the slaughter that is ongoing in the country by licensed slaughterhouses,” she said

Dr. Maichomo said the four slaughter houses in the country based in Turkana, Baringo, Naivasha and Machakos were the same regions with the highest donkey population in the country.

“When we did the survey in April 2019, we confirmed about the reported deaths, thefts and slaughters part of it illegally in bushes. We found this has had tremendous effect on donkey numbers and this will significantly impact on the livelihoods of the keepers and owners,” she added.

According to statistics, Turkana and Kajiado counties reported the highest donkey theft cases with 26 percent and 12 percent respectively.

The effects of theft according to Brooke East Africa reports has affected donkey owners who have become poorer at 77.7 percent, reduced income for women at 19.2 percent, increased labour for women by 35.6 percent, children missing school at 15.8 percent, loss of source of transport at 29.1 percent and prices of donkey have also gone down to Sh.12, 000.

An animal welfare organisation also recently warned that unregulated cross-border movement of donkeys and poor hygiene in slaughterhouses increases the risk of spread of diseases. In a report titled Under the Skin, the Donkey Sanctuary notes that donkeys are silent carriers of many diseases and often do not show signs of sickness.