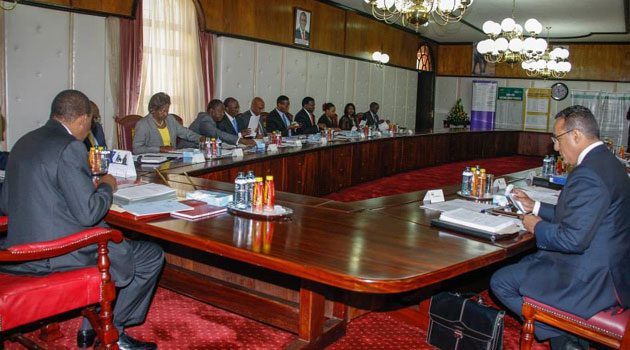 For the second time in five years, Kenya has banned the adoption of Kenyan children by foreign nationals. A special Cabinet meeting chaired by President Uhuru Kenyatta held on Thursday directed the Ministry of Labour and Social Protection to immediately enact new policies to regulate the practice of adoption and streamline operations of the Child Welfare Society of Kenya (CWSK). The Cabinet has issued a high-level directive against taking Kenyan children for adoption abroad, after imposing an indefinite moratorium in 2014.

The directive comes at time when the adoption practice had attracted international attention with the United Nations and the American government flagging Kenya as a source and transit hub for child trafficking.

“The government of Kenya does not fully meet the minimum standards for the elimination of trafficking but is making significant efforts to do so,” the US State Department had said in a global survey.

The adopted children were suspected to end up in the hands of organ harvesting syndicates while others were subjected to sexual exploitation. One family in Kakamega was found to have been made to sign a disclaimer by a foreign couple in 2015 that the foreigners  “would not be held responsible for death or injury of the child while in their custody”, according to an official report.

Corruption has played a major role in these crimes against humanity in the country “Traffickers sometimes fraudulently obtained identity documents from complicit officials, and police often took bribes to warn traffickers of impending operations and investigations, particularly along the Coast.” the US report’s Kenya section found.

Kenyans had taken to social media to lament against such cases:

"Cases of children getting lost, stolen, or sold have become rampant in places such as hospitals, churches and schools…… studies have established that inter-country adoption is big business, done at the expense of children."#Justiceforourbabies

According to the Global Report on Trafficking in Persons 2014, by the UN Office on Drugs and Crime, Kenya is cited as one of the countries that are in denial and neglect when it comes to reporting or prosecuting cases of humanand child trafficking #Justiceforourbabies

Apparently this Wazungu's have been takings is for fools. Adoption laws needs to be strengthened, this video explains your African kid might be taken without you knowing.#CotToCourt pic.twitter.com/nhH33K24Y6

The fact internation adoption is banned by the Kenyan court means anyone who is not Kenyan but has adopted a Kenyan child is actually trafficking. There is not other explanation. #CotToCourt

According to a research,for every child put up for adoption,there are atleast 6 Kenyans willing to take the child#Justiceforourbabies