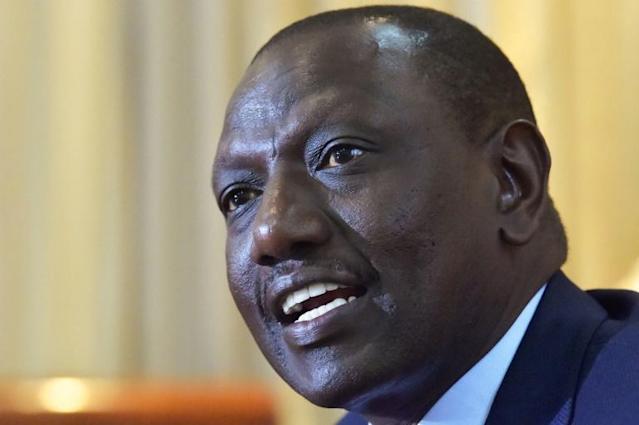 William Ruto is one of the big factors in Kenya's political future -- the deputy president has an on-and-off relationship with his boss, Uhuru Kenyatta.

With major constitutional changes suspended for now, and swirling new alliances taking shape, Kenya’s political scene is shrouded in uncertainty as the country eyes crucial elections due a year from now.

Here is a look at how Kenya got here and what lies ahead when East Africa’s powerhouse elects a new president and parliament next August.

– What happened to constitutional change? –

On Friday, Kenya’s Court of Appeal rejected President Uhuru Kenyatta’s bid to change the constitution, arguing that he had no right to do so. The decision marked the latest twist in a debate that has gripped the country since 2018.

According to Kenyatta, the so-called Building Bridges Initiative (BBI) would expand the executive and overturn the winner-takes-all electoral system that has been blamed for frequent explosions of poll-related violence in the East African nation.

But his detractors saw it as little more than a naked grab for power by a two-term president who cannot run a third time, with the BBI potentially allowing him to assume the new position of prime minister.

In addition to creating new posts, the sweeping changes would also increase the number of parliamentarians from 290 to 360, prompting fresh alliances with a view to dividing the spoils come election time.

Friday’s judgement has put paid to those hopes.

Even if Kenyatta approaches the Supreme Court, the verdict will come too late to let his planned transformation take shape before the August 9 vote, throwing the field wide open.

The BBI came on the heels of a shock rapprochement between Kenyatta and his long-time foe Raila Odinga, who declared a truce with a headline-grabbing handshake in March 2018, following deadly post-election clashes in 2017.

Related Content:  Parliament is Unlawful and Shall Not Conduct Business Beyond 12th October, 2020, LSK Says

The pact stoked speculation that Odinga would succeed Kenyatta, who would in turn become prime minister, with other politicians persuaded to fall in line in exchange for new posts.

It left Deputy President William Ruto, whom Kenyatta had initially anointed as his 2022 successor, out in the cold.

The pair’s frosty relationship became evident this week when the president challenged his deputy to resign “if he is not happy”.

Yet doubts have now emerged about how long the Kenyatta-Odinga coalition will last, with the BBI on its last legs.

“The big question will be: will the alliance that is being built with Odinga be able to hold in the absence of the BBI?” said Nic Cheeseman, professor at Britain’s University of Birmingham.

“What positions will have to be offered to people so that they sacrifice their presidential ambitions and line up behind Odinga?”

For his part, Ruto, who has branded himself as a candidate for the common man, cheered the decision, calling it a victory for “the Hustlers” trying to survive in a country ruled by political dynasts such as Kenyatta and Odinga.

– What about ethnic issues? –

The 2022 election may spring yet more surprises, with experts saying that ethnic issues, which have traditionally played an important role in Kenyan politics, may no longer carry the weight they once did in a country with 44 tribes.

Ethnic affiliations will still matter at the ballot box, but they will not be “the main discussion” topic, said Kenyan political analyst Nerima Wako-Ojiwa.

“Young people do not necessarily identify with the tribal language used in the past,” she told AFP, pointing out that Kenya will add six million more potential voters in 2022 compared to 2017 as youngsters come of age.

The battle for the youth vote will play a big part in determining the winner of next year’s race, she said, along with shared concerns such as reviving the Covid-battered economy and improving healthcare.

That could spell good news for Ruto, who belongs to the Kalenjin ethnic group but has tried to run a campaign that crosses tribal lines in a bid to attract the support of all Kenyans who feel economically marginalised.

“If it is (successful)… it’s a really big challenge to the established way of doing politics in Kenya,” Cheeseman told AFP.

Kenyan presidential elections have always boiled down to a two-horse race — but that may now change.

At the moment, it “is very plausible in this election… that we actually have three or four viable candidates”, said Cheeseman.

Such a scenario would generate more debate about likely contenders in the run-up to the election.

It would also make it difficult for any candidate to score the 50 percent plus one vote required to win, he added, raising the likelihood of a historic second presidential round.-AFP.

Kenya Insights allows guest blogging, if you want to be published on Kenya’s most authoritative and accurate blog, have an expose, news TIPS, story angles, human interest stories, drop us an email on [email protected] or via Telegram
Related Topics:Raila OdingaUhuru KenyattaWilliam Ruto
Up Next