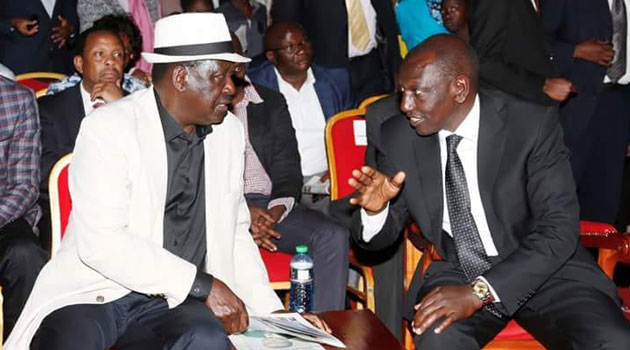 Raila’s puzzling protocol has been increased by the President with everything passing through DP Ruto’s nose.

Last week, Raila represented Kenya in a conference on Infrastructure under the Belt and Road Initiative in Ethiopia.

He jetted back in the Country on Friday and was given a Presidential escort and security to Kiambu County where he was scheduled to Officially officiate the ground breaking of the Tatu Tech City.

The recent Presidential escort and Security detail being offered to Mr. Odinga has increased discomfort from DP Ruto and his allies.

According to Ruto allies, and majority of Rift Valley MPs, Raila has been given an upper protocol in government than Ruto.

The MPs have accused Raila of using his current position to blackmail the public in his power trapping scheme.

The Rift Valley MPs complains were echoed by the self proclaimed Ruto spokesman Oscar Sudi.

Sudi says the President has downgraded Ruto and his constitutional responsibilities and privileges given to Raila.

This is not the first time DP Ruto’s camp is feeling left out in Jubilee’s government rather degraded by President Kenyatta.

In January this year, DP Ruto was forced to have a closed door meeting with President Kenyatta in Mombasa after the President transferred most vital Ruto’s constitutional powers and responsibilities to Fred Matiangi, the Interior Cabinet Secretary.

On Raila’s defense, his spokesman Dennis Onyango, said that former Prime Minister is not a government employee.

Onyango said that Raila is only helping the country heal and get past the bitter divisions that had shredded peaceful coexistence.

According to Dennis Onyango, Raila is outlining the issues the government should keep working on to sustain coexistence in the country.

However, according to Rift Valley MPs, Raila Odinga, the Opposition leader who turned out to be Chief government policy supporter and influencer elevated protocol by government and increased security details and deep State role remains a threat to the existence of Jubilee and DP Ruto’s political cause.

Kenya Insights allows guest blogging, if you want to be published on Kenya’s most authoritative and accurate blog, have an expose, news TIPS, story angles, human interest stories, drop us an email on [email protected] or via Telegram
Related Topics:Fred MatiangiRaila OdingaUhuru KenyattaWilliam Ruto
Up Next