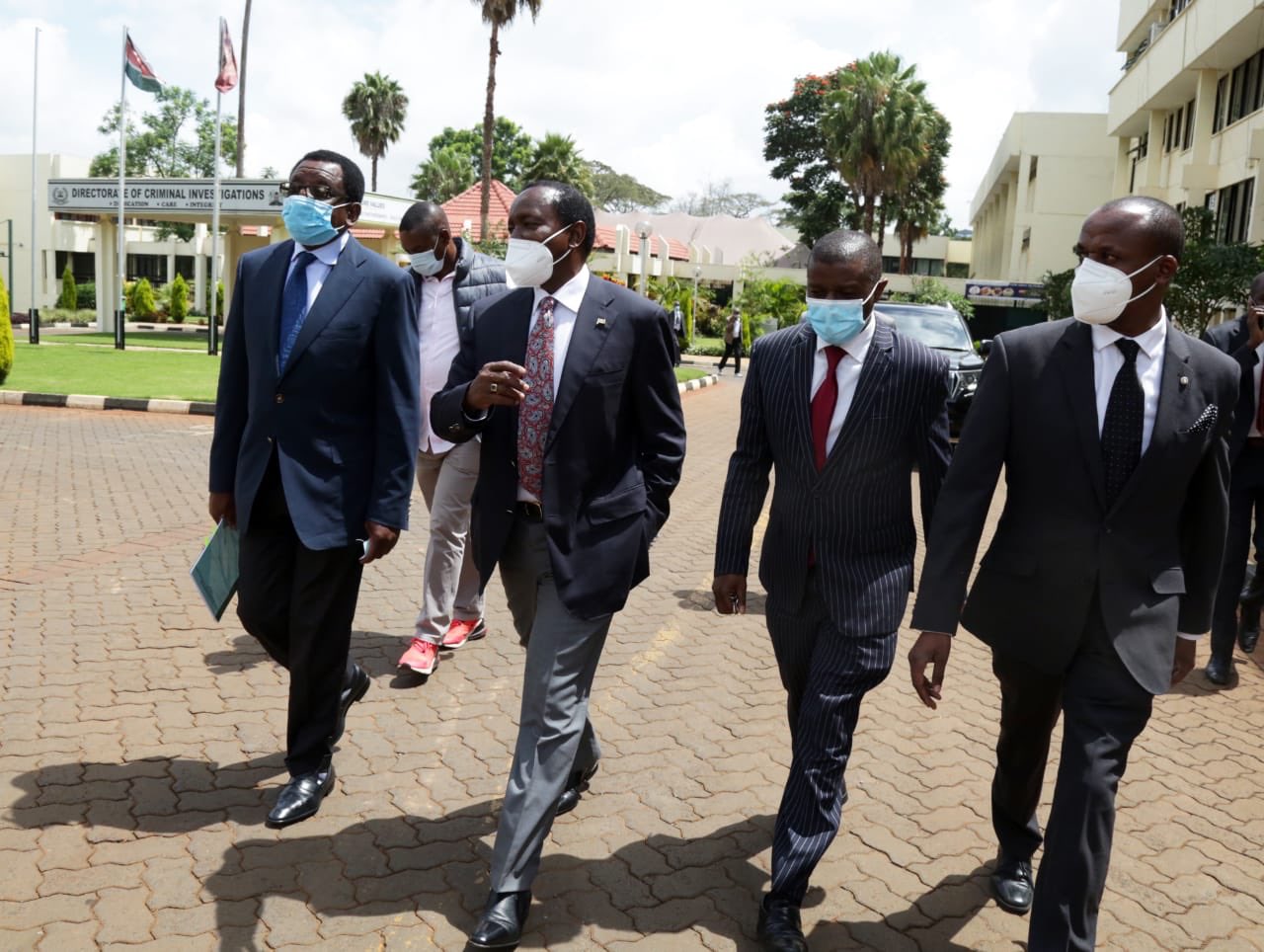 Former Vice President Kalonzo Musyoka is escorted to DCI headquarters where he volunteered to appear there over allegations that he grabbed Yatta land.

Wiper party leader Kalonzo Musyoka Friday morning presented himself to the Directorate of Criminal Investigations (DCI) headquarters along Kiambu Road to clear his name over land grabbing allegations levelled against him.

Kalonzo was expected at the DCI headquarters at 8.30 am but arrived later in the company of his lead lawyers Senators James Orengo and Mutula Kilonzo (Jr) and supporters.

An undeterred Kalonzo Monday promised to voluntarily present himself before the detectives following aspersions cast on his character by Deputy President William Ruto concerning the ownership of his land in Yatta, Machakos County.

“H. E KALONZO MUSYOKA will be voluntarily presenting himself before the Directorate of Criminal Investigation at Karura, Nairobi, tomorrow, Friday January 22, 2021 at 08:30, following aspersions cast on his character by Deputy President William Ruto concerning the ownership of his (Hon. Kalonzo’s’) land in Yatta, Machakos County” read an invite for press coverage from his communications office.

Ruto had accused him of grabbing the 200-acre piece of land belonging to the National Youth Service (NYS), claims the Wiper leader described as a cheap character assassination attempt.

Slamming the DP, he said “The wild claims hold no water. The allegations are a cheap a desperate cheap attempt at character assassination. I uphold the highest moral and ethical standards in all my affairs. I have nothing to hide…I am today presenting myself for a thorough investigation….i want the matter settled once and for all, indeed this is the time to separate the truth from lies and malicious propaganda”.

Kalonzo invited investigative agencies to probe the matter and challenged DP Ruto to also offer himself for investigation.

The former Vice President said he will appear before the sleuths for investigation armed with all the legal/official documents showing how he acquired the said property.

He expects the DP who he has labelled as a chief land grabber to follow suit and be accountable by offering himself for scrutiny.

“Hon. Kalonzo and his supporters expect DP Ruto to follow suit and present himself before the same authorities for scrutiny” read the press invite.

Kitui Governor Charity Ngilu has defended Kalonzo over the accusations which she dismissed as baseless.

Ngilu, who served as lands minister during President Uhuru Kenyatta’s first term in office, insists that the land in question rightfully belongs to Kalonzo.