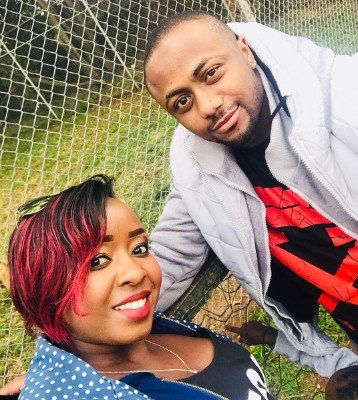 Citizen TV’s Jacque Maribe has gone into hiding according to the police who’ve been looking for her to make a statement following the arrest of her fiancé Joseph Irungu now being held at Muthaiga police over the gruesome murder of Monica Kimani at her home in Kilimani.

According to the police, the car Irungu used to Monica’s apartment a Toyota Allion, belonged to Maribe. This is the same car used to drive Maribe home from a Kilimani club according to Irungu statement and also one he was shot in allegedly. A bit of inconsistency in the report has raised questions.

Earlier, both Irungu and Maribe had told police that the shooting had happened inside the house before the script was changed to outside the gate. Irungu was positively identified by at least four witnesses as the last person to have walked in and out of Monica’s body dressed in a white kanzu before her body was later discovered.

Irungu was also driving the same car at about 1.30am on September 21, when he claimed to have been shot and wounded in the chest by a gunman who allegedly escaped on a motorbike outside their house.

On the night of September 20, Irungu had told police he had picked Maribe from a club in Kilimani and driven to their house in Royal Park estate, Langata.

Irungu told police they arrived in the estate at about 1.30am when he spotted three men standing outside.

Irungu told police he took Maribe into the house and went back to the gate to check what was happening. That is when he claims to have been shot.

Irungu said he went back to the house and told Maribe what had happened. Maribe told police she was drunk and drove him to Nairobi West Hospital where he was attended to and sent home.

The two also told police they went to Nairobi West Hospital and Langata Hospital the same night seeking treatment for the gunshot wound. But yesterday, one of their lawyers told a Kiambu court that the couple also went to Kijabe Mission Hospital.

City Lawyer has now taken over the case representing the TV star who now finds herself in the middle of one of the coldest killings in town. Her accounts of events will be key in piecing up events of that night. Being the person who was last with the murder suspect the night he was supposedly shot, Maribe’s testimony will either nail or exonerate the suspect.

Circumstances upto the alleged shooting holds a lot and movements from Kilimani club if it ever happened, she could describe the situation of Irungu when he went to pick her. Most likely if version is true, Irungu might have killed Monica first then proceeded to pick Maribe from the club. Her accounts of events from that point will be very crucial like how he behaved, what he said or whom he talked to and in what.

It has also been established that Irungu who boasted of being a licensed gun holder is a lie as he didn’t have any registration. Details on what he does exactly as a private security guard is unknown. Being a trained killer, Irungu has been providing his services in Dubai and Afghanistan.

The two lovebirds have been cohabiting and police are interested to get her points on his lifestyle that would be crucial in the investigations. A live bullet is said to have been discovered under their bed.