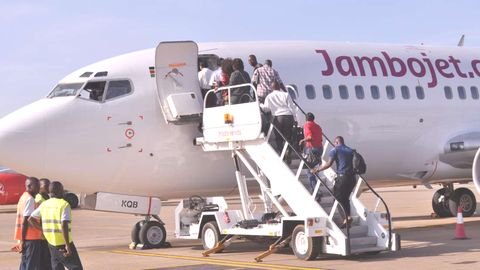 Budget carrier Jambojet has revealed tickets prices for flying between cities in Kenya without stopping at its hub in Nairobi from October 2 after receiving regulatory nod for longer trips.

The carrier had received permission from Kenya Civil Aviation Authority (KCAA) to fly directly from Mombasa to Kisumu and from Kisumu to Eldoret- Malindi-Lamu without stopping in Nairobi.

On Monday, Jambojet announced it will charge an introductory one-way fare of Sh8,900 for direct flights between Mombasa and Kisumu, a lower rate compared to breaking the trip in Nairobi.

Those flying between Mombasa and Eldoret will pay the same fare, a discount compared to the Sh11,800 they would have paid for taking two planes after a stopover in Nairobi.

“We continuously listen to our customers’ needs and are happy that we can now connect the Western region to the coastal region with the introduction of these direct flights,” said Titus Oboogi, head of sales and marketing, Jambojet.

The direct flight comes at a time when the aviation industry is in turmoil following the disruptions caused by the Covid-19 that saw airlines around the world grounded.

Kenya resumed domestic flights in July, but demand is yet to return to peak levels.

Jambojet said last month that they have also received permission to carry conventional cargo within and outside the country where the carrier currently flies.

After putting in place a raft of safety and health measures, Jambojet restarted operations on July 15 and currently flies to six local destinations of Malindi, Ukunda, Mombasa, Kisumu and Eldoret from its hub in Nairobi.