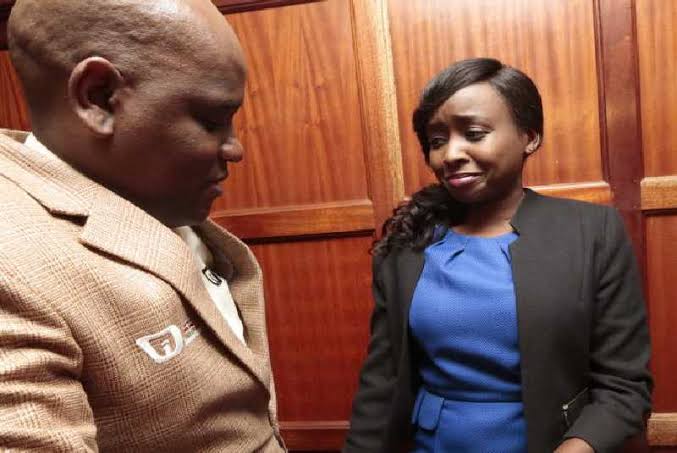 Dennis Itumbi when he showed up for Maribe during her case mention.

Embattled TV queen Jacque Maribe has called it quits after rendering her resignation with Royal Media Services where she’s been working behind the screens after being freed from custody.

Maribe who started off her career at K24 in 2009 after graduating from the University of Nairobi, was able to maintain a darling reputation until the murder case of business lady Monica Kimani whom together with her fiancé Joseph Irungu aka Jowie were accused of killing.

Maribe was until her interdiction, a colorful news anchor with Citizen TV. On being released on bail, Citizen didn’t write her off, instead, Maribe was moved from her position as a news anchor to an editor after Justice James Wakiaga barred her from reading news or interviewing anybody regarding the murder case during the trial period.

According to media reports, Maribe cited ‘personal reasins’ for her resignation.

This comes hot in the heels when her other close friend Dennis Itumbi who has been supporting her from day one was also arrested in relation to a fake letter of the assassination of Deputy President Ruto.

Itumbi got himself in more trouble after it emerged that he threw a ‘bash’ at Muthaiga Police where he was given special treatment and allowed to stay with his guests until midnight according to reports. Muthaiga Police OCS Kimengwa has since been interdicted for allowing Dennis Itumbi pose for photos with Maribe in the cells. Many have also said this would put her in more trouble for taking photos in restricted areas.

As to what’s next for Maribe who has overtime made a career and living out of media, it’s only time that will tell. As she battles her murder case, we wish her well.

Related Content:  Mombasa Governor Joho Arrested: The Behind Scenes That We Know So Far
Kenya Insights allows guest blogging, if you want to be published on Kenya’s most authoritative and accurate blog, have an expose, news TIPS, story angles, human interest stories, drop us an email on [email protected] or via Telegram
Related Topics:
Up Next