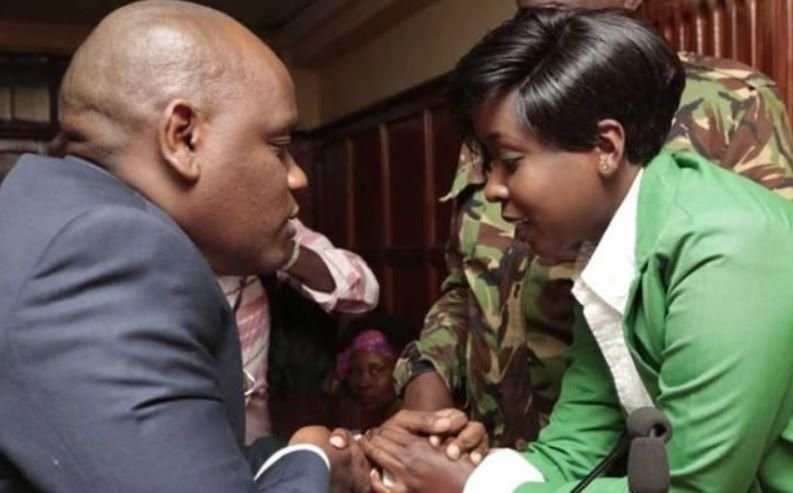 Itumbi and Maribe talking on the side when she appeared in court.

It is not a secret that there exists a very strong bond or attraction between Itumbi and Maribe even though he says their relationship is not romantic.

Ever since Jacque Maribe was first summoned for questioning on Monica Kimani’s murder before her arrest, Itumbi has come out publicly in giving Maribe moral and other ends of support.

Despite Maribe always appearing with her fiancé Jowie, Itumbi has not shied away from anything even the cameras to cross the crocodile infested rivers for Jacque, in her las court appearance, Itumbi even joined her in the dick and tightly hugged her as Jowie tried so hard to assume.

The government’s digital strategist who’s said to now be in the cold after being blocked from entering Statehouse seems to be breaking the borders for his friend Maribe. He has written letters,  written poems the only thing Itumbi hasn’t done yet is breaking down on camera for Maribe.

A source is now revealing to Kenya Insights that Itumbi has also been making daily visits to Lang’ata women prison where Maribe is being held. The source says he’s a frequent visitor and gets preferential treatment whenever he visits.

Source tells us that he’s accorded longer hours with the prisoner where they spend more time together. This has caused a discomfort in the prison walls as to why he should be given the preferential treatment.

Itumbi’s sustained court appearance is said to be giving the case pomp and frustrating Maribe’s chances of getting bail as its read that she has friends in high places that can influence the case.

The love or obsession that exists between these two is a whole new book.