One of the Kenya’s leading premium healthcare provider, Nairobi Hospital, is currently conducting a mass recruitment of doctors into their Intensive Care Unit(ICU) to deal with surging number of patients amidst challenges and deaths blamed on their staff arising from failures at the same unit.

The recruitment comes at the backdrop of a petition and report filed in court which the death of a lady  who had developed complications after a breast enlargement surgery, could have been caused by patient being mishandled at the Nairobi Hospital according to an interested surgeon in the investigations, death occurred after the neck veins were severed, a gush of blood streamed into her lungs and stomach.

The enlargement involved a fat transfer, not an implant. She later developed complications and was rushed to Nairobi Hospital where she died after few days.

The three doctors investigated exonerate themselves from her death, saying a doctor at Nairobi Hospital should be held responsible.

In affidavit, Nairobi Hospital received the lady in stable condition but it was Dr Reuben Okioma who injured her neck at the hospital, causing the injuries that led to her death. Report says after the neck veins were punctured, a blood gushed into the lady’s lungs and stomach.

She suffered hypovolemic shock, cardiac arrest and died, he said. Hypovolemic shock occurs when the body loses more than 20 per cent of the blood or fluid supply. The loss makes it impossible for the heart to pump sufficient blood.

Results of a post-mortem performed by Daniel Zuriel confirms this.

Now husband of the lady, Joseph Malupi says the management of his wife at Nairobi Hospital was wanting and her death could have been avoided.

Kenya Medical Practitioners and Dentists Board, which is probing the death has come under criticism over what is said to be vested interests and more so for not roping in Nairobi Hospital in the probe.

The three doctors say they fear KMPDB will blame them for the lady’s death yet “it is Dr Reuben Okioma who injured the neck vessels of the patient, causing the injuries that led to her death.”

The three doctors have accused the medical board of bias in the handling of the case lodged by the lady’s husband. The trio argues that the move is discriminatory and that the committee looking into the matter was constituted by the medical board with a sole intension of settling scores.

It turns out that Dr Opot is a colleague of one of the three doctors under investigations at the university and would likely have a biased decision since he had a personal difference with him as well.

They also argue that all the three committee members are parties to a case in which one of the surgeons being investigated is the complainant against the board over a decision made by Dr Opot. The conflicting interests leaves a wide space for biased decisions.

The medics also allege that it is Dr Okioma of Nairobi Hospital who injured neck vessels of the late yet he has not been requested to record a statement. “All indications are that the KMPDB intends to lay blame on the trio since Nairobi Hospital and Dr Okioma have been exempted from the investigations notwithstanding that the deceased met her death while on their hands,” says Prof Kiama Wangui, their lawyer. 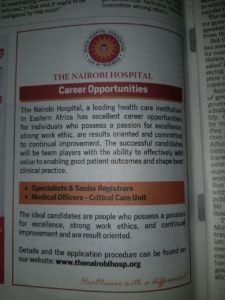 Meanwhile, sourcing are intimating to us that even though Nairobi Hospital and it’s responsible doctors are yet to be questioned in this case despite postmortem results indicating cause of death which could’ve have been avoidable and happened right st their facility, the hospital’s woes could be far from over.

Related Content:  Spraying Disinfectants On The Streets Doesn’t Kill Covid-19 And Is Harmful, Says WHO

Its alleged that in this year alone, there are about six cases of patients dying after neck vessels injury, similar to this case of botched surgery. Some of these cases, the hospital has been sued. It’s in this backdrop that we wonder whether Nairobi Hospital has realized incompetence and failure at their unit where there are reported cases of avoidable deaths or simply an expansion strategy.