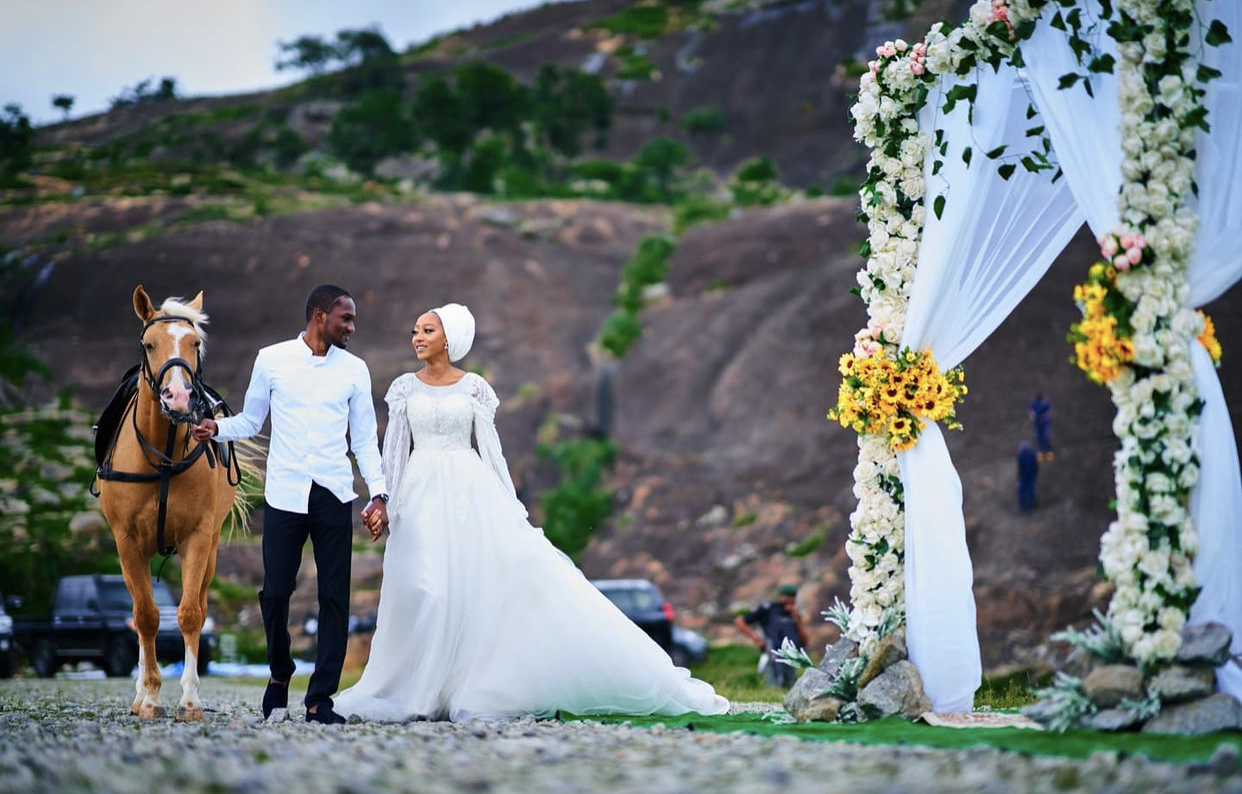 One of Nigeria’s biggest celebrity events of the year took place on Friday – it was the wedding of the president’s only surviving son and the niece of the Emir of Kano, one of Nigeria’s most prominent Islamic leaders. Thousands attended the event at the palace of the Emir of Bichi, a town in the northern state of Kano. A historian told the BBC that a wedding between presidential and royal families was unprecedented in Nigeria – and, interestingly, the pair met at the University of Surrey in the UK.

Private jets reportedly filled the runway of the airport in Kano as members of Nigeria’s elite and West African dignitaries flew in for the wedding of Yusuf Buhari, 27, to Zahra Nasir Bayero, 19. Every five-star hotel in the state was fully booked.

According to the BBC, the groom’s family paid 500,000 naira (£900) as the bride price – about 10 times the average amount in northern Nigeria. Despite reports of the sheer scale of the celebrations, it is understood to have been a scaled down version because of the coronavirus pandemic and many of the guests wore face masks. The BBC reports that there was heavy security at the wedding ceremony, with police and military officers guarding the palace and stationed at nearby strategic locations.

The wedding itself was reportedly conducted by Communications Minister Isa Ali Pantami, a qualified imam. ‘Top politicians and traditional rulers from across the country flew in, including several opposition figures. Among them were President Muhammadu Buhari’s predecessor, Goodluck Jonathan, whom he defeated in the 2015 election,’ the BBC writes. They also report that Gambia’s First Lady Fatoumata Bah Barrow and the former president of neighbouring Niger, Muhammadu Issoufu, were among the foreign guests.

On Saturday, the bride’s father Nasir Ado Bayero was officially crowned as the Emir of Bichi; his brother is the Emir of Kano. Nigeria’s first lady Aisha Buhari shared some photos of the couple, poignantly captioning one image: ‘All is set to welcome and receive our new daughter into the family.’

The no-expense-spared wedding provoked a furious reaction from some of the poverty-stricken Kano residents given the levels of deprivation in the area. Sheikh Dr Ahmad Mahmud Gumi told the Times: ‘People are facing all manner of problems, yet politicians spent public funds on private jets.’

Kenya Insights allows guest blogging, if you want to be published on Kenya’s most authoritative and accurate blog, have an expose, news TIPS, story angles, human interest stories, drop us an email on tips.kenyainsights@gmail.com or via Telegram
Related Content:  Event planner on the run after conning Kenyan entertainers
Related Topics:
Up Next

500,000 abortions happen in Kenya nationwide every year, according to statistics