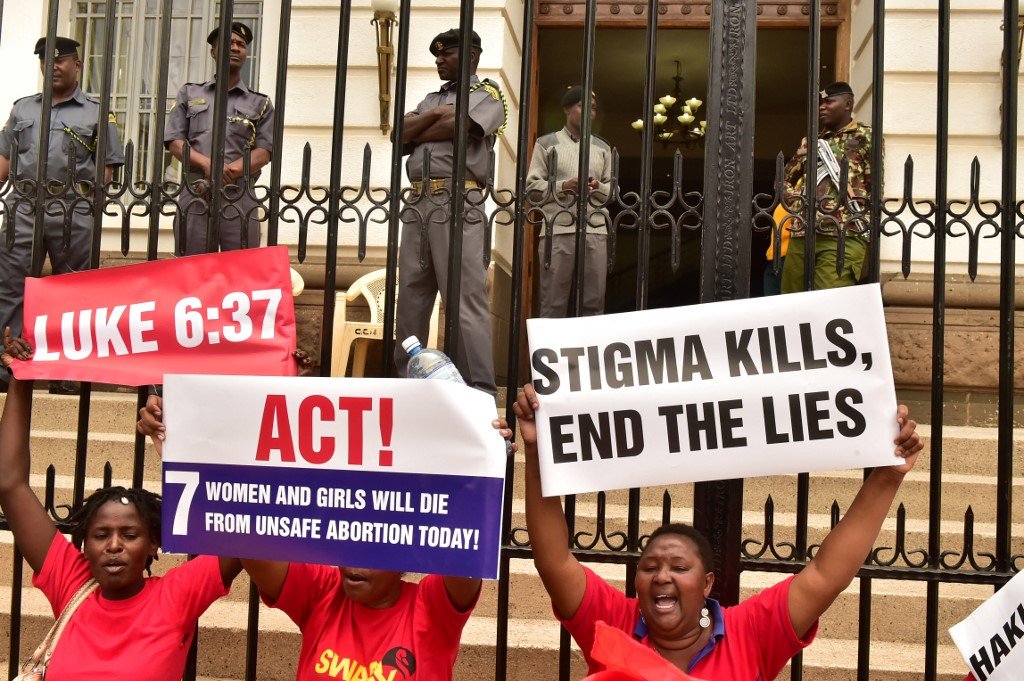 Radio celebrity Julius Owino, known as Maji Maji, recently made a startling claim to start off a discussion about abortion in Kenya.

“500,000 abortions hizo uhappen Kenya [happen in Kenya] nationwide, according to statistics,” he said on Ghetto Radio.

He then asked if abortion should be made legal in the country. Kenyan law allows abortion only if a trained health professional recommends emergency treatment or believes the life or health of the mother is in danger.

But are there half a million abortions in Kenya? We checked.

Owino told Africa Check he got the statistic from an article in one of the newspapers published on 22 July 2021, the day of the show.

We found the article, headlined “Ulcers drugs being used for abortions”, in the Daily Nation’s e-paper edition. (Note: The online version of the article is behind a pay wall.)

The article reads: “A recent nationwide study by the African Population and Health Research Centre reveals that more than 500,000 abortions are conducted annually in Kenya.” The APHRC is a Nairobi-headquartered health research think tank.

We asked the centre about the figure. A spokesperson, Siki Kigongo, sent us two studies.

The first, titled Incidence and Complications of Unsafe Abortion in Kenya, was conducted bythe APHRC, the health ministry, and others. It was published in August 2013 and  found thatthere were 464,490 induced abortions in Kenya in 2012. Most of these were unsafe, it said.

The World Health Organization defines unsafe abortion as the termination of a pregnancy by a person who is not trained or in an environment that does not meet minimum clinical standards, or both.

The figure was a middle estimate. The number of abortions could have been as low as 344,000 or as high as 546,601. The data was sourced from both public and private health facilities across the country.

But some shortcomings were noted in a 2015 follow-up paper by some of the researchersfrom the study, who used the same data. For example, the previous study only looked at women and girls who went to hospitals to terminate a pregnancy or treat abortion-related complications.

Some may have opted not to go to hospital, while others with severe complications may have died without reaching a facility, the paper said.

The other study the APHRC shared with us was published in 2018, and also cited the 2013 study. The figure of 500,000 quoted by the Daily Nation and Maji Maji comes from this study.

Discussing the costs of treating abortion complications in Kenya, it says that “nearly half a million induced abortions (464,690) were performed in 2012”.

She told Africa Check that abortions may be under-reported by heath facilities. And many women and girls who have abortions without serious complications may never go to a facility.

“Because of this potential bias in reporting of abortions, estimating the number of abortions requires alternative methods that can be quite intensive and expensive,” Kabiru said.

As an example, she said the 2013 study was a product of three separate surveys. “The resources required for such an intensive study may not be readily available for regular surveys.”

She said the APHRC was seeking funding for a follow-up survey.

She told Africa Check that the “stigma and false narratives” in communities, together with the country’s justice system, was putting the lives of women and girls in danger.

“Many women cannot go to the hospital to seek safe and legal abortion for fear of prosecution and judgment even in situations where the terminated pregnancy is the result of rape, or it is a medical emergency,” Machio said.

Kabiru agreed. She said that the “sociocultural sensitivities surrounding sexual and reproductive health” and the legal restrictions made women and girls “reluctant to speak about their abortion experiences because of fear of stigma or legal repercussions”.

Discussing unsafe abortions in Kenya, a popular radio show host said there were 500,000 abortions in the country every year.

We tracked the figure to a study published in 2013 by the African Population and Health Research Center, a health think tank in Kenya. The study estimated there were 464,490 induced abortions in Kenya in 2012.

A review of the data and conversations with experts shows this is the most reliable data currently available on the topic. The think tank told Africa Check it is looking for funding for a follow-up study.

We therefore rate the claim as mostly correct.

Related Content:  A Man In Nyeri Could Enter The Guinness Book Of World Records As The Oldest Human On Planet
Kenya Insights allows guest blogging, if you want to be published on Kenya’s most authoritative and accurate blog, have an expose, news TIPS, story angles, human interest stories, drop us an email on [email protected] or via Telegram
Related Topics:Abortion in Kenya
Up Next