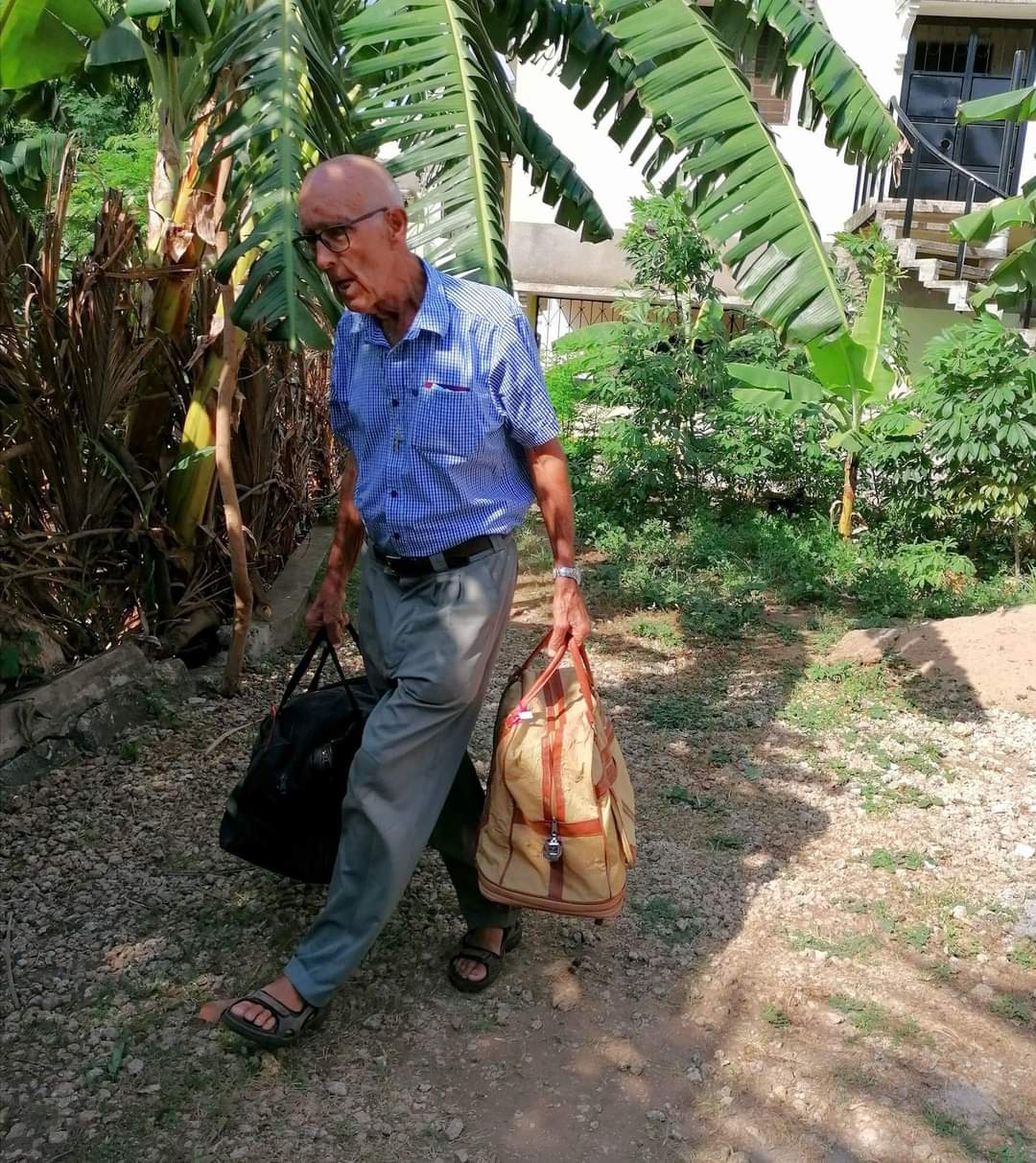 Fr. Adolf Omogaka Poll, an Italian Catholic priest returns back to his home country with just two small bags after 53 years of missionary work in Kenya.

In his hey days, Italian Catholic priest Fr Adolf Poll straddled the Gusii hills on a motorbike to the hue of the local folk.He could occasionally stop his motorbike on the roadside and speak to women in fluent Ekegusii while he served in Nyamagwa, Gekano and Ichuni parishes. His old pick-up was readily available to ferry patients to hospital, an offer that endeared him to residents.His mastery of Ekegusii and his long service in the region would earn him the nickname Fr Alleluia Omogaka.He served from 1969 to 2000 before being transferred to Malindi where he served until his retirement.On Tuesday, he completed his mission in Kenya and returned to Italy after 53 years — with just two bags. He will celebrate his 81st birthday next month at his home in Italy.According to Catholic media, the priest celebrated his farewell mass at the parish of WituKipini in Malindi on May 23.“Fr Poll, 80, packed all of his personal belongings acquired during his more than five decades of priestly ministry in Kenya, in just two small bags, and began his journey home in Italy for his retirement,” said Catholic Justice and Peace Commission in a statement on his departure.It cited Luke 9: 3-6 as a testimony of the humble priest’s Christian mission in Kenya.He told them: “Take nothing for the trip – no staff, no bag, no bread, no money, no extra shirt. Whichever house you enter, stay there until you leave this town. If the people do not welcome you, leave their city and shake the dust off your feet as a testimony against them. So they left and went from village to village, proclaiming the good news and healing people everywhere. He was ordained a priest in his native diocese of Bolzano-Brixen, in northern Italy in 1966.He then left his native town, South Tyrol in December 1968 to serve as a missionary priest in Kenya. While in Kenya, the Mill Hill missionary is celebrated for constructing churches and paying school fees for children from poor families.Fr Lawrence Nyaanga says Poll replaced him in Gekano Parish after he was transferred to Nyabururu Parish describing him as sociable, compassionate and humble.Life was exemplary

“I met him when I was a seminarian. He was open, friendly and motivated us to work hard to be ordained. His life was exemplary” Nyaanga told People Daily.He said the priest reared dairy cows, employed youths to care of them and donated milk to members of his flock.Nyaanga, who is Kisii University chaplain and serves at cathedral parish, says Fr Poll gave him free iron sheets which he used to construct a house, adding he will remember him forever for the support..“He baptised me in 1982. I have never seen a friendly priest like him. He whistled and joked with people whenever he was driving. May God’s grace be with him as he retires,” said Geoffrey Mogire, a Catholic faithful.Samwel Karuru, another Catholic faithful from Nyangusu parish, said the priest single handedly constructed Rusinga village polytechnic and helped construct several churches .“He could drive as if he wanted to knock pedestrians, only to stop, laugh and crack a joke,” Karuru recalled.

500,000 abortions happen in Kenya nationwide every year, according to statistics