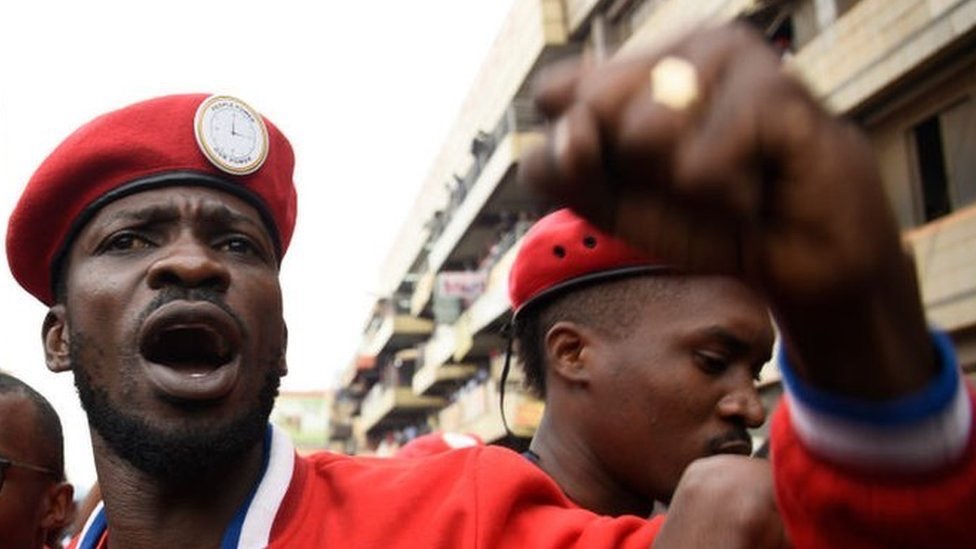 Reports coming from Uganda are not good on the health status of detained politician Bobi Wine. According to available information, the ‘ghetto president’ had his kidney damaged and suffered internal injuries from the torture reigned on him by soldiers in the barracks where he’s currently being held. Bobi is to face the martial court once again on Thursday where he’s charged for being in possession of illegal firearms.

Wine was in the northwest of the country in the Arua municipality on Monday Aug. 13 to show support for a new candidate in a local by-election. Museveni was also there to throw his weight behind the ruling party’s candidate. Their supporters clashed as protestors pelted Museveni’s car with stones, breaking the rear windscreen, Uganda’s military said in a statement.

At 36, Wine appeals to a youthful electorate excluded by the polices of their 74-year-old president. With Uganda’s median age at 15 years, Wine could emerge as the strongest opponent to Museveni in the 2021 election. He won his seat running both against  the ruling and opposition parties by positioning himself as the voice of the youth, scoring a landslide victory. Additionally, the opposition candidate he was campaigning for in Arua, triumphed over Museveni’s choice.

For a tyrant who recently forced a law extending his presidential term limits, Museveni is determined to rule Uganda by fire and blood and that’s why anyone who comes his way with the energy of Bobi, has to face his monkey tactics of silencing critics. Trumped up charges, torture, court martial and prison has been his tools of trade on critics for ages.

UPDATE: Independent medical personnel who have had access to @hebobiwine say he has a damaged kidney,suffered immense internal bleeding and his head and hips require an immediate scan.

An idea whose time has come can never be stopped and Africans especially the young people who’ve been victims of tyranny are standing up with Bobi Wine and Uganda to say enough is enough. The youthful politician has stirred and pumped out the pan Africanism fire in many young people. Twitter as a powerful social media tool I’m voicing opinions and shaping conversations, has been instrumental during these times of Bobi.

Related Content:  Breaking The Taboo; How to Handle the Intersex Discussions in Kenya

To muzzle voices, Museveni introduced a primitive law that requires Ugandans to pay taxes to use social media, the only intention of such an uncouth law is to ensure the voices of many youths who’re pounded by unemployment and frustrated by tyranny are silenced.

Africa has come out in numbers to tell off Museveni. Shooting missiles from their phones, Kenyan online army better known as KOT (Kenyans on Twitter) are all out in their style standing in solidarity with Ugandans most of whom are locked out from accessing the internet thanks to the social media tax. Kenyans have taken the lead as Africa Twitter shouts loudest against the dictatorship horror in Uganda.

Mr. @KagutaMuseveni, you claimed to be a freedom fighter when you went to the forest in 1981 with a ragtag of boys. However, since 1986, you you have brutalized Ugandans and turned the country into a personal fiefdom. Ugandans aren't your cows. #FreeBobiWine and his comrades. https://t.co/Ab1v7Kgxr3

#Uganda I'm sure you read this. We are together. They cannot kill an idea that has come. Bobi wine is that seed. The process may be long,but I'm sure it has created a lot of Bobi wines. This must be it. #FreeBobiWine

I hope @KagutaMuseveni Knows it's the end for him. What you've done to @HEBobiwine is the biggest mistake a tyrant does. You assume that Ugandans can't rise against you well…you just gave them enough reason to do so. The world is watching. PEOPLE POWER ✊🏿🇺🇬
#FreeBobiWine

Ugandans are paying to tweet #FreeBobiWine. We should support him/them as East Africans since the rest of us don’t have to pay for this.

The dictatorship in Uganda should see the wisdom of starting to listen to dissenting voices. Ethiopia has shown the region the way. We must loudly condemn @KagutaMuseveni’s determination to silence alternative voices in the Pearl of Africa. Museveni MUST #FreeBobiWine

Museveni is terrified of Bobi Wine coz here’s a young man with the same energy he had when he forcefully took over Uganda.

Whole Africa is onboard

Despots and tyrants oppress, torture, maim or kill their real or perceived opponents out of fear and desperation in order to extend their illegitimate regimes. That should give freedom fighters seeking to remove them more energy. Let's #REVOLT against all tyrants. #FreeBobiWine

For several years, #Uganda under #Museveni has been a frog in boiling water. International partners keep letting M7 get away with more overt levels of repression & fail to hold him accountable because he secures their regional equities. It’s sad to watch. https://t.co/buXgnsxibN

This is the beginning of the end of the Museveni dictatorship in #Uganda. Mark this tweet. From attempting to assassinate, planting evidence, and then charging with “treason,” the regime is having sleepless nights over Bobi Wine’s (@HEBobiwine) genuine popularity. #FreeBobiWine

Since Museveni seized power in 1986, many of his critics have been detained in unknown locations, beaten within an inch of their lives or died under suspicious circumstances. In December 2012, 24 year-old MP Cerinah Nebanda was poisoned.

Like Kyagulanyi, she was a young, charismatic and outspoken critic of Museveni’s repression and corruption, and her parliamentary colleagues called for an independent inquiry. Museveni called them “fools” and had them jailed on trumped-up charges.

In September 2017, Special Forces troops raided Parliament to stop the filibuster of a bill that would entrench Museveni in power indefinitely. During this operation, security forces crippled MP Betty Nambooze, who required a six-hour operation to repair her damaged spine.

Forget About Ruto And Think On The Future Political Context