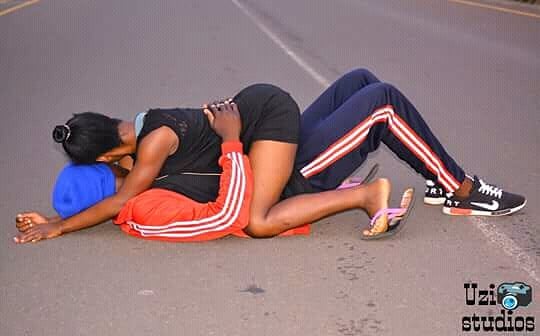 One of the raunchy photos trending of the teenagers.

For the last two days, Kenya’s social media has been filled up with crocodile tears and cosmetic concerns with faked surprise following a campaign aimed at exposing the explicit photos teenagers have been posting in their social media pages.

Kids are experts at reflecting our behavior, we oversexualised our radio content, music, jokes. Change hashtag from #IfikieWazazi to #irudiewazazi.

I’m saying this for the fact that, these things have been happening right before our eyes but passed as normal until someone started a campaign then suddenly everyone activated their moral cards.

Dear Young People of Kenya – please listen, from a Mwalimu that loves you so much. Don't let this ifikie wazazi hashtag shame you into silence, or derail you from demanding more from the adults and leaders of your country. I know its hard, but pay it no heed. Resist. Persist.

Today’s teenagers are a reflection of a society that is passing out nudity as art, normalized prostitution by encouraging the socialite culture which is a soft term for prostitutes. Why would we expect the young generation to be better when the old already went to the dogs. These young people don’t create anything, they simply adopt from what surrounds them. We should be soul searching instead of mere castigating as to where the society went wrong.

Parents, guardians, influencers, brothers and sisters, we’re largely to blame, we’ve abandoned the duty of raising these young people and left them on their own, to learn on their own. We no longer give life directives. When was the last time your young one down to speak some sense to them, then we act all surprised when they live their own ways.

I clicked #IfikieWazazi out of curiosity and I must admit that THE SOCIETY HAS COMPLETELY FAILED THE KIDS! What happened to parenting? Back then every adult was a parent and could discipline any kid. This system should come back. We must salvage this generation while we still can

Society had run out of role models, we’re having more single mothers than ever and many kids raised without their fathers, this affects their growth and development but nobody wants to touch it. Parents are spending time more at work and social places, giving kids zero attention and only left in the hands of teachers and the cruel world to pick life lessons from.

The thing that finishes me about #IfikieWazazi is not even the fake concern, but that so many ADULTS are taking sadistic joy in one future outcome: deep shame of parent(s) (and moralising that it must happen) resulting in cruel reactive punishment and humiliation for MINOR(S). https://t.co/g5HQ6BeUif

Traditionally, in Africa, the duty of raising kid was the society’s, today with civilization or in this context, destruction, it has become a parent’s obligation. This why we overlook bad behaviors by teenagers around and ignore the fact that it’s not your son or daughter, brother or sister. And since their parents don’t bother either like the Society, they adopt it as a norm.

Like a tree, kids will only grow according to according we nurture them, watering, trimming, there are no miracles here. If we want better kids then we must be better adults. This starts all the way at home where hold parties, behave in the most ratchet ways, what we say and do, the kids pick every single detail.

I’m not going to act surprised at what I’m seeing on the trending topic because I’ve seen grown-ups do the worst and this they picked from us. If you want them to do better than we must start being better and please can you start paying attention and speak to your sons and daughters, most simply lack guidance in their lives that’s that’s they don’t see any harm in being raunchy for internet love, after all, internet is giving them attention and love, something lacking in most homes.