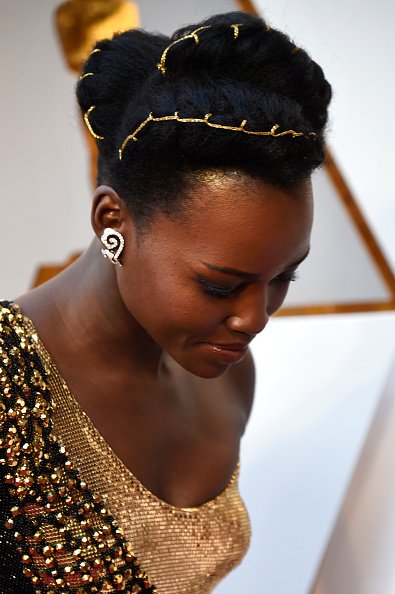 Apart from the actual award, the red carpet is always the highlight of the award and so celebrities step in their A game. For the 90th Annual Academy Awards, the situation wasn’t any different only that this time, we had our very own Lupita shutting down the event.

Declared the queen of the red carpet, Lupita didn’t come to play, in a perfectly fitting and glittering golden dress made by Versace and an outstanding hairstyle to compliment the look, she became one of the most talked about according to Twitter report on the red carpet. 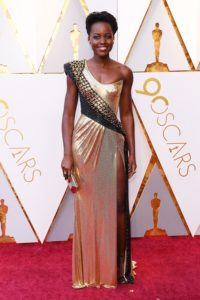 Awards show always come out more as fashion display than anything that’s why designers will spend millions and endless pursuit to book an actor, artist, athletes whoever is appropriate to model and showcase their brands. In such a case like that of Lupita which I suspect she was approached by Versace given her A listing especially on the carpet, they customize the dress for you and you don’t pay them, it’s the other way. This is always a marketing strategy and securing a deal with an actress in the league of Lupita to model your dress is tedious given a number of designers streaming for a chance.

Lupita’s outstanding hairstyle, the loops of the golden string aren’t just a beautiful style, however. The look is inspired by traditional Rwandan Amasunzu hairstyles, whipped up by Vernon François, who was responsible for the Black Panther star’s hair on the cover of the March issue of Allure.

Crown inspiration: the Amasunzu hairstyles of Rwanda. By the incredible hands of @vernonfrancois @theacademy #oscars2018

I’ve come to notice the Nyongo’s love for Rwanda designers. During Black Panther premiere, her younger brother was dressed by ‘House of Yayo’ a fashion designer in Kigali. It was such a milestone especially the fact that she posted his work to millions of her fans worldwide. What I’m trying to build here is Kenya as the homeland of Lupita is missing out on golden opportunity to showcase it’s own and  not featuring on the fashion bloc when other countries are lucky and milking off it.

Who’s to blame? Kenya undoubtedly has sharper fashion designers who can come up with inspiring styles for Lupita the question that would remain is if they’ve made efforts to dress Lupita and if yes what has been the response? I’m yet to publicly see anything from fashionistas in town complaining about being shut down by her. Imagine a case of Lupita hitting the red carpet in a fully Kenyan inspired outfit beaming cultural diversity. Has it ever even hit the minds of our friends at Kenya Tourism Board to fix such a deal.

My brother's "Wakanda Secret Service" three-piece suit for the @blackpanther premiere was custom made by Kigali's @HouseOfTayo. No fittings. Just precise measurements sent and his photos studied. Turned around and delivered in 2 weeks: That's some SKILL! From #RwandaToWakanda @blackpanther (I mean, peep the panther patches tho!) #MatthewRugamba

Our fashion designers some of whom have done well in the international market, deserve such high audiences to show their works. It shouldn’t just have to be them pushing, Lupita should too find it patriotic and be inspired to put out other Kenyan talents out there. Commendable that at some point back she posted on her Instagram about ‘Housewives of Kawangware’ a local reality show satire, that was a boost.

I just want to see more of Kenyan designers work being out there whether through Lupita or any other celebrity gracing a big stage. We need to embrace spirit of helping each other grow and using the privileges and opportunities we hold in the society such as they of Lupita to build up and promote talents. Oscars is gone there will be many more awards and magazine shoots can those engaged ensure that we have something Kenyan other than herself on these stages. 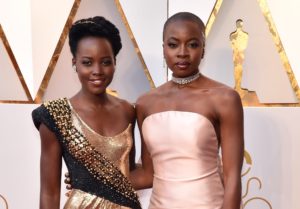 Lupita and Dianna from Black Panther At the Academy Awards.

At one point we were talking about national uniform, it is celebrities such as Lupita who inspires culture and if we can have these celebrities influencing a culture through Kenyan-fied dressing them we get closer to that dream. Fashion culture is underrated in its potential to creating employment & promoting creativity. If we’re to address the super climbing disaster of joblessness then we must diversify in creating job opportunities and fashion is such one opportunity.

Kenya Insights allows guest blogging, if you want to be published on Kenya’s most authoritative and accurate blog, have an expose, news TIPS, story angles, human interest stories, drop us an email on [email protected] or via Telegram
Related Content:  A Rare Photo Of The Kenyatta Family
Related Topics:
Up Next

Ifikie Wazazi: Spare Us The Hypocrisy, The Society Is To Blame For The Raunchy Internet Behaviour