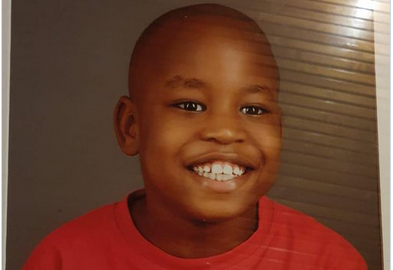 The father of a boy who died at The Nairobi Hospital has demanded an inquest into contentious circumstances surrounding the incident.

Through a viral social media post, he blamed gross negligence by staff at the facility for the unfortunate loss of life.

According to the middle-aged man identified as Isaac Opondoi, his eight-year-old son Ryan Hawi went through an erroneous treatment procedure administered by medics who were oblivious to its dangerous effects.

What began as a regular hospital visit turned into an exhausting emotional rollercoaster. 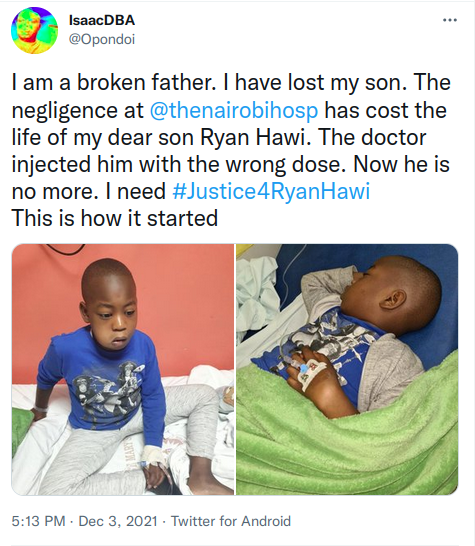 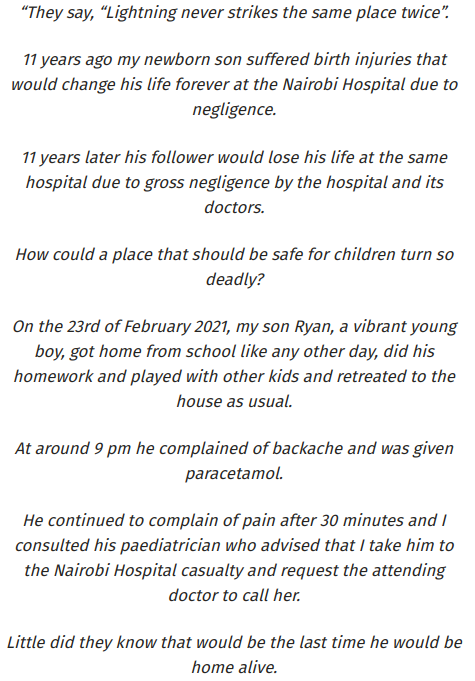 When they arrived at the hospital that night, he initially declined admission after his son showed signs of improvement after they gave him painkillers.

He was later convinced into accepting the recommendation after his son began showing signs of drowsiness. 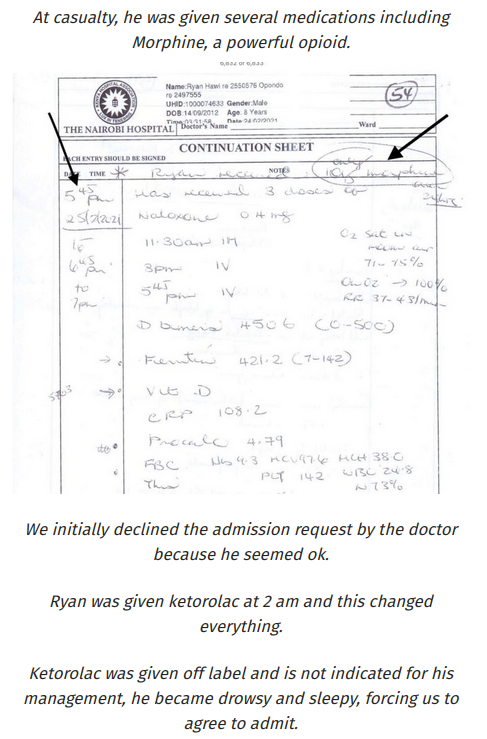 He claims that during the four-day period, doctors at The Nairobi Hospital administered a set of different medications to Ryan without properly observing his body’s response.

This eventually led to a dangerous overdose of the powerful opioid drugs.

By this point, his son had grown too weak to fight anymore. 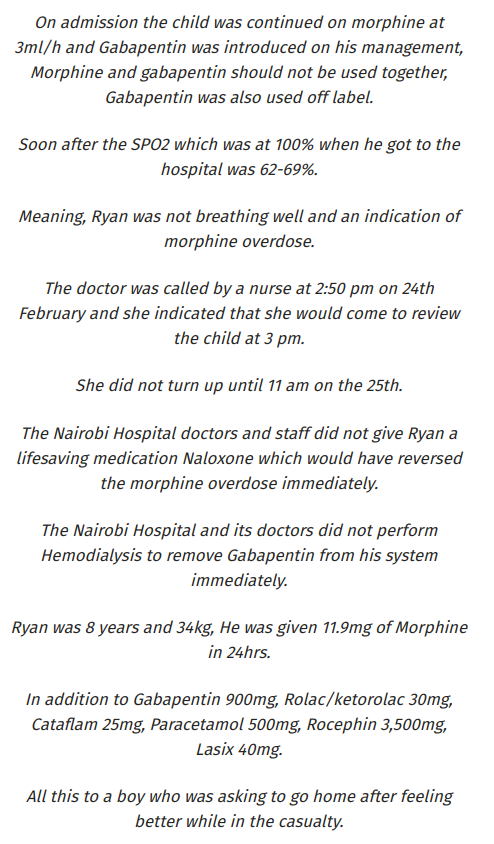 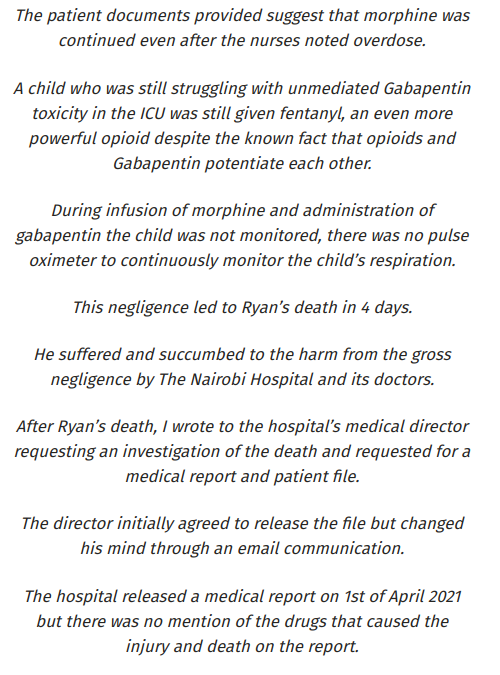 Following the tragic death, the only place he found comfort from the affliction was in seeking justice for his son’s demise.

Even before concluding the grieving process, he decided to file a case with the Kenya Medical Practitioners and Dentists Council (KMPDC) where he saw potential refuge.

He also reported the incident to the Pharmacy and Poisons Board as well Pfizer who is the manufacturer of the drug that caused his son’s death.

But as he further explained in his long Twitter thread, this quest for truth slowly turned into a struggle that has dragged on for more than half a year without any success.

He says that the process which began in May 2021 has constantly faced frustration from some of the parties involved.

To begin with, efforts to get crucial documents from The Nairobi Hospital have mostly been unsuccessful.

He mentioned how at one point, they even submitted false information to the investigating council.

This, he claims, was in an attempt to protect the names of the medics that handled his son’s life during the four days.

The distressed father now alleges a convergence of interest between the Nairobi Hospital, its doctors, and the KMPDC. 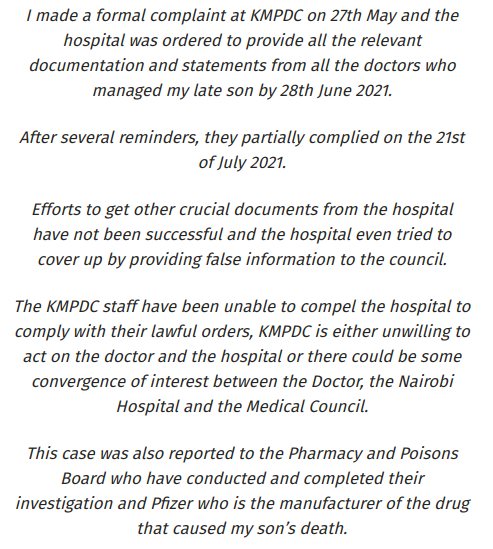 Through the hashtag #JusticeForRyanHawi, he wants to mobilize enough support to push relevant authorities into taking action against the hospital.

Further castigating the health facility, he said it was not the first time that their negligent staff had incurred him pain and anguish.

He disclosed how his firstborn son suffered “birth asphyxia” at The Nairobi Hospital eleven years ago. 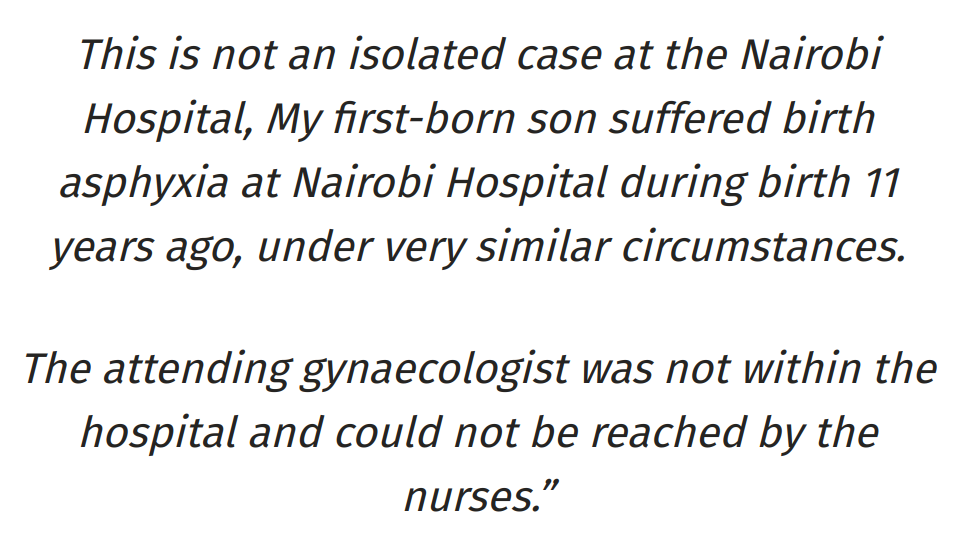 This is a condition of lack of oxygen and blood flow which happens when the baby’s brain and other organs do not get enough oxygen and nutrients before, during or right after birth.

As of the publishing of this post, The Nairobi Hospital was yet to issue a comment on these latest claims.

Check back for subsequent updates on this developing story.