A man alleged to be a son to the Inspector General of Police (IG) Hillary Mutyambai has become the latest talking point on social media.

The conversation was started by former State House Director of Innovation, Digital and Diaspora Communication, Dennis Itumbi, who broke the news that the chap was among a group of young people that suffered a grisly road accident along Nairobi’s Southern Bypass.

Through a Facebook post published on Thursday, 2nd December 2021, the political strategy consultant claimed that the speeding vehicle flew from one side of Langata Road and swept everything on its path.

One of the vehicle’s female occupants as well as a pedestrian are said to be currently fighting for their life.

“So the puppet IG cannot arrest them because it is alleged the son is involved,” the blogger wrote.

In a follow-up post on Friday morning, Itumbi made further claims that it was Mutyambai’s son on the wheel during the accident.

All the occupants of the vehicle, including the driver, are said to have been drunk.

According to him, a deliberate plan to cover up the incident is already in play.

“Multiple eyewitnesses confirm that he was drunk and had two passengers in the car who were also intoxicated,” he recited. 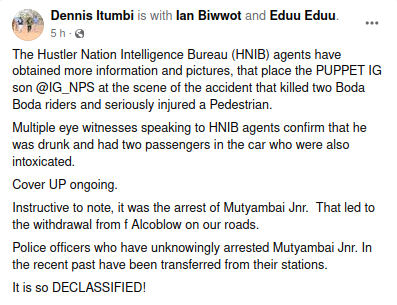 This widespread allegation was also restated by other witnesses who spoke out online.

Reacting to the news of the accident, a netizen revealed how he encountered the drunk Hilux driver and warned him to be more careful with the lives he was ferrying.

Unfortunately, he did not heed the advice.

“I chased the pickup and blocked him. I told the driver to drive carefully, even though they looked drunk with other ladies but he ignored me. Less than 1 km later, he killed 2 people,” the Kenyan wrote on Twitter. 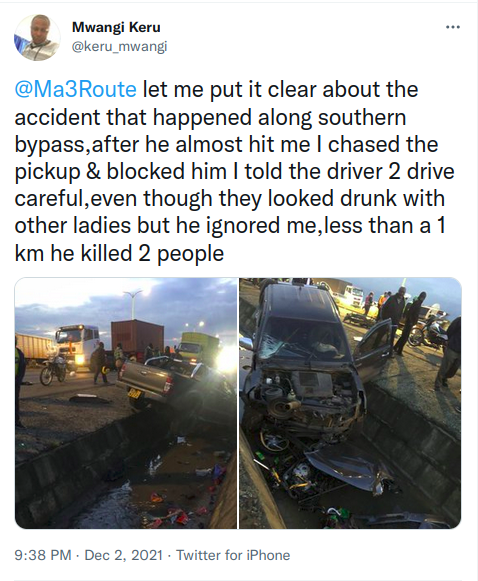 As of the publishing of this post, IG Hillary Mutyambai was yet to comment on this latest fiasco.

Itumbi is also yet to provide further details on the young man who he claims to be the IG’s son.

During a media interview in the past, Mutyambai confirmed that he is married to one wife Susan Nzioki and blessed with two children, only named David and Lucy.

He did not specify their ages. 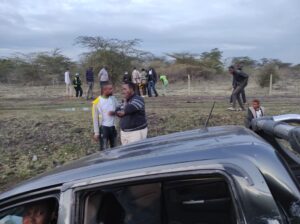 Man in black seen holding his cheek is alleged to have caused the accident.

NOTE: Kenya Insights can’t authenticate that the person alleged to be behind the accident is indeed the IG’s son and will update as events unfold.