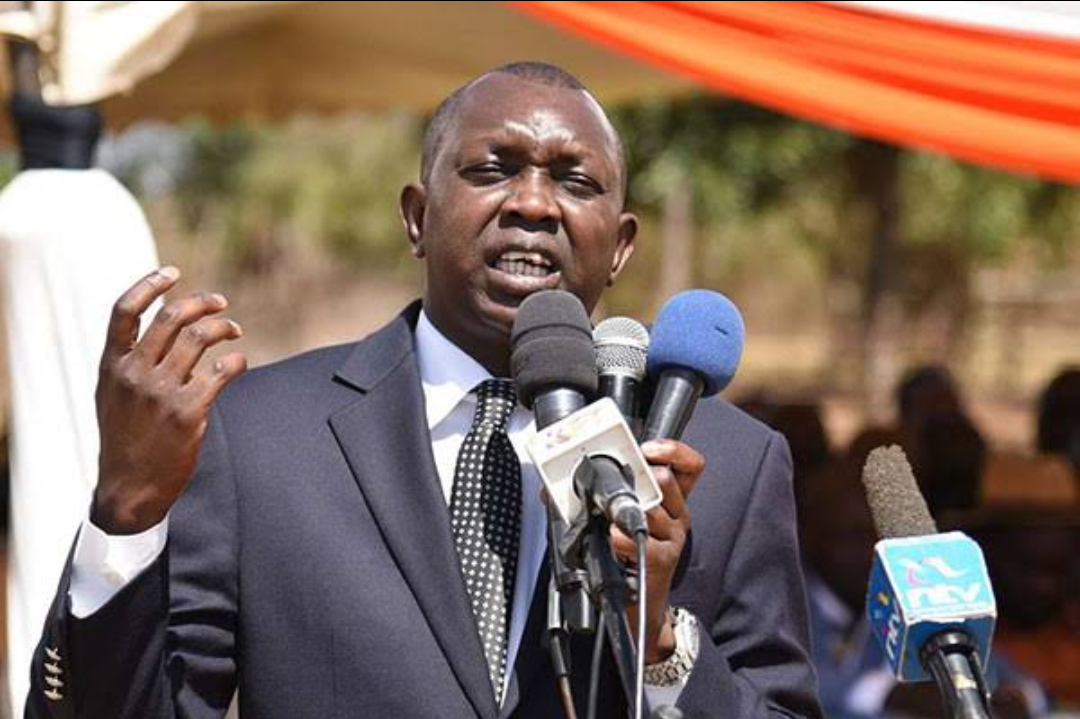 Oscar Sudi, the Kapsiret MP and self proclaimed Ruto’s spokesperson has now claimed that Uhuru and Ruto’s political friendship is a bluff.

According to the vocal DP ally, currently President Kenyatta is unable, rather unfit, to lead the country.

“Apparently, the relationship between the President and his deputy is like of a man and a woman who are married, but sleeping in different houses an indication that the union is over. Kenyans should not be cheated to believe they are still in good terms,” Sudi said.

Sudi said Ruto’s claims that President Uhuru and him enjoy a cordial bond are fake and a blatant lie to any sobber being.

“It is obvious there is no bromance still existing in the Presidency as it was before. All this has been fueled by succession politics and the fight pitting dynasties and hustlers. President Kenyatta should hand over power to someone else,” Sudi said.

According to Sudi, DP Ruto knows that he no longer has the Jubilee’s administration respect nor President’s ear.

“If you see Senators and Governors on the streets demonstrating over an issue that would have otherwise be solved then there is a big problem,” Sudi said.

On Sudi’s opinion, things are not good anymore and the centre cannot hold anymore.

According to Sudi, Uhuru’s close relationship with DP Ruto has ended, rather vanished, and the duo are now engaging in a fake political union.

Well, on my opinion, Sudi might be right. Everyone can clearly see that Jubilee is no longer a united front like they initially were in the last two Presidential campaigns.

Related Content:  Sonko Offers Help To The Family Of Mariam And Daughter Amanda

According to Sudi, Ruto should accept what has befell him and urged him to stop pretending over his relationship with the President because no one can believe it anymore.

Sudi alleged that President Uhuru has now started turning against his own friends and supporters in Jubilee and is using state entities to sacrifice them in the name of fighting corruption.

Sudi said, In a press conference held at his home in Eldoret, that he would make a better interim President that’s if Uhuru would step down for him.

Sudi has talked a lot of sense in this clip if you listen closely.
pic.twitter.com/tkzlzqIlzm

“Within three months, I can do better. I will get a deputy like Moses Kuria and we will perform better.” Sudi said.

Oscar Sudi alleged that Uhuru is now engaging in sideshows in the name of ‘war on graft’ to bluff the country because his Big Four agenda have failed.

According to Sudi, President Uhuru’s family wealth is not only unrealistic but also ill-gotten to an extent that the head of state has to offer “innocent sacrificial lambs” to the Nation for him to prove that he’s in charge.

According to Sudi, President Uhuru is corrupt and, is instead, terming others as corrupt.

Sudi stated that Kikuyus and Kalenjins were paying a heavy price for backing Uhuru and Ruto’s political journey.

According to Sudi, the Arror and Kimwarer dams scandal is a political gimmick by Uhuru and state entities.

“They wanted the two projects to collapse and I can now assure our people that Arror and Kimwarer are dead projects.” Sudi said.

“I have asked the President to forgive Kalenjins if we offended him but now I have to speak the truth.” Sudi added.

Sudi urged the President, if he won’t step aside for him, to bring his house together and solve their own problems with Ruto privately without involving the entire nation.

Kenya Insights allows guest blogging, if you want to be published on Kenya’s most authoritative and accurate blog, have an expose, news TIPS, story angles, human interest stories, drop us an email on [email protected] or via Telegram
Related Topics:Jubilee PartyOscar SudiUhuru KenyattaWilliam Ruto
Up Next

Senator Orengo: Ruto Has Nothing To Lose If Uhuru’s Agenda Flops