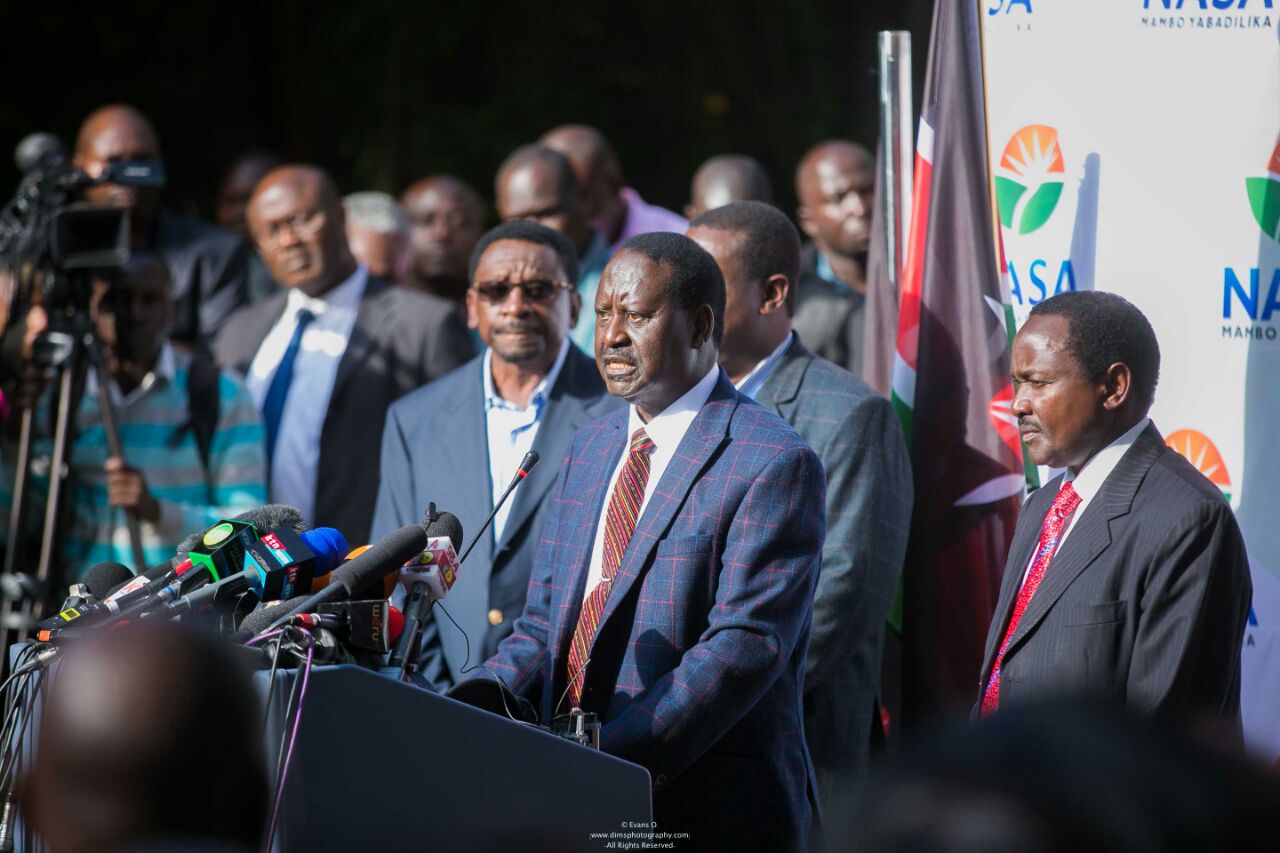 Raila Odinga at the press conference

‘KENYANS SAY NO TO COMPUTER-GENERATED LEADERS’

My fellow Kenyans,
For the third straight election in a row, the voice of the people has been stilled, and for the third time in a decade, the candidate who lost the election has been declared President.

This year, Kenyans excitedly voted in a peaceful election that even the most democratic nations in the world would have been proud of.
But this democratic promise abruptly evaporated when those who wield power clung to their old, no-holds-barred script of rejecting the people’s democratic will and holding on to their rule by whatever means.

Once the polls closed last Tuesday, the IEBC began streaming so-called provisional presidential results not backed by Form 34As as required by law.
Yesterday, IEBC CEO Ezra Chiloba finally made the stunning admission that the Commission was not able to supply all Form34As yet. This means that both the provisional and final results announced last week are null and void and that Uhuru Kenyatta was not lawfully declared winner.

From the start, the IEBC was illegally releasing unverified results to create the expectation of an Uhuru Kenyatta victory. This was the equivalent of guaranteeing violence if the final verified results indicated Uhuru had lost.

Then there was the bizarre phenomenon of Uhuru Kenyatta’s “lead” staying at around a consistent 11 percent throughout the release of the “results!” surprisingly, this same pattern also occurred in many gubernatorial races across the country.
Such a fixed margin has never been maintained throughout any democratic election anywhere in the world. But it happened here because an algorithm had been introduced to rig the outcome. It happened in full view of all our people and all the election observers.

Then finally, at midnight last Friday, we saw the IEBC announce that Uhuru Kenyatta had been elected president, even though the Commission continued to acknowledge that only about 29,000 of the 41,000 verified Forms 34As had been tallied!

Why was there this fanatical rush to judgment on the most vital matter that any democratic nation EVER faces, the election of its President for the next five years? And why did the IEBC refuse to address the set of questions about vote tallying that that NASA had submitted?

IEBC might have declared Uhuru Kenyatta president, but a vast number of Kenyans have not accepted the legitimacy of the decision, and will not accept it until they have answers to profoundly disturbing questions that have been raised. Indeed, the Carter Centre, in its preliminary findings has questioned this rush and its overall impact on the outcome. The Centre says:

“Although election day voting and counting processes functioned smoothly, the electronic transmission of results from the polling stations to the 290 constituency centers, where official results are tallied, proved unreliable. Unofficial results were also transmitted to the national tally center, where they were posted on its website. Unfortunately, the early display of vote tallies at the national level was not accompanied by the scans of polling station results forms as planned, nor labeled unofficial, leading to some confusion regarding the status of official results.”

No one should believe, and especially not those behind this election fraud, that Kenyans are sheep who will willingly go along with democracy’s slaughter. This country is now divided between those prepared to live under autocracy and the forces of freedom and democracy.

Most Kenyans do not agree that our democracy is a charade, a game, in which people campaign their hearts out for leaders they want, but are then given a winner pre-determined by the darkest forces in our society and beyond.

We also have the no less bizarre situation where some observers grossly violated their mandate and started calling upon NASA to concede – even before the IEBC officially announced the election’s outcome.
We Kenyans will not let such impunity continue any longer. We have the right, and indeed the high responsibility to defend the Constitution and the people’s will. Peaceful assembly is guaranteed by the Constitution, so is civil disobedience. So is the right for labour to strike.

And yet our people are being admonished not to protest an election they are convinced has been stolen. The State unleashed unprecedented violence against perceived NASA supporters in their homes and houses. The police have shot, bludgeoned, and cut short the lives of innocents like infant Baby Samantha Pendo at six months and Stephanie Moraa Nyarang’i a young girl of 9 years using crude weapons and live bullets.

Yet as Kenyans are butchered and their civil liberties trumped upon, they are being told not to protest against a leader they believe is being imposed on them through a computer-generated fraud.
The entire world knows that there were nationwide protests in the US after the last elections. We also know that to date, there are investigations going on by the Justice Department and Congress to establish whether the US elections were hacked by foreign agencies.

We refuse to sit and watch the Jubilee turn our country into a banana republic and a playground.
Accepting such a crime for the third election in a row would irredeemably entrench the triumph of anti-democratic impunity and the permanent death of democracy. Future elections would be a sham. NASA shall not be party to it.

The Constitution gives us the incontrovertible right to protest injustice peacefully, and wage a peaceful campaign of civil disobedience. We will preach peace, and we have done so. But we will uphold our rights to assemble and protest. We shall hold vigils, moments of silence, beat drums and do everything else to peacefully draw attention to the gross electoral injustices being meted on our country and demand redress. Kenyans have no need to use violence to achieve justice.

We also emphasize that the struggle here is not just about this moment or this election or this nation. It is about Africa and it is about democracy.

If Kenya, one of Africa’s most vibrant democracies except at election time, can be so easily intimidated to surrender, then what hope is there for the rest of Africa?

It is in this regard that we call upon all African democrats to publicly show solidarity with Kenyans.

The merchants of State violence expected NASA to walk Kenyans into death traps. They dispatched merchants of death to carefully selected parts of the country. The people are held now under a hostage siege. The intent is murder and mayhem. Wanton murder, rape and violence are being committed against the people to pacify them against seeking justice. This is why the government is violently demobilizing civil society organizations for daring authoritarianism and seeking justice.

We had said we will not go court. But with the raid on civil society and determination to silence all voices that could seek legal redress like AFRICOG and the Kenya Human Rights Commission, we have now decided to move to the Supreme Court and lay before the world the making of a computer-generated leadership.

By going to court, we are not legitimizing misplaced calls by some observers for us to concede but are seeking to give to those who braved the long lines in the morning chill and hot afternoon on Tuesday August 8th 2017; mothers with their children tied on their backs; the sick, people with disabilities, old and young a chance to be heard.

Furthermore, we act on behalf of those who have been blocked from seeking redress in courts such as the sustained clampdown on the civil society that have attempted to go to court. NASA wants to show the world what transpired in the fraud.

Even as we go to Court, we are cognizant of the fact that ever since Uhru Kenyatta and William Ruto publicly warned the Judiciary, the IEBC has not lost a single case in court. We have decided to move to the Supreme Court despite the history and other recent circumstances. In similar circumstances in 2013, we moved to the Supreme Court to challenge the declaration by IEBC of Uhuru as President-elect. The manner in which the Court handled that petition was a travesty of justice. The Court decided all interim applications in favour of Kenyatta. The Court also allowed the counter petition filed in favour of Kenyatta but disallowed the two petitions against him. Uhuru won 100 per cent and we lost 100 per cent in court.

Our decision to go to court constitutes a second chance for the Supreme Court. The Court can use this chance to redeem itself, or, like in 2013, it can compound the problems we face as a country.
We will show how they shamelessly cooked results from non-existent polling stations and fake un-gazetted Presiding and Returning officers. They gave figures from non-existent Forms 34A and 34B; they scrambled to manufacture such forms; switched vote numbers; and how they openly swindled to reach predetermined consistent vote numbers. They cooked numbers to the extent that vote tallies often surpassed registered voters in polling stations.
Kenya is always much larger than my individual ambition. But Kenya is definitely not too large for all of us to ensure that anyone who wins the people’s votes, and not the loser, is declared President. This is just the beginning. We will not accept and move on.