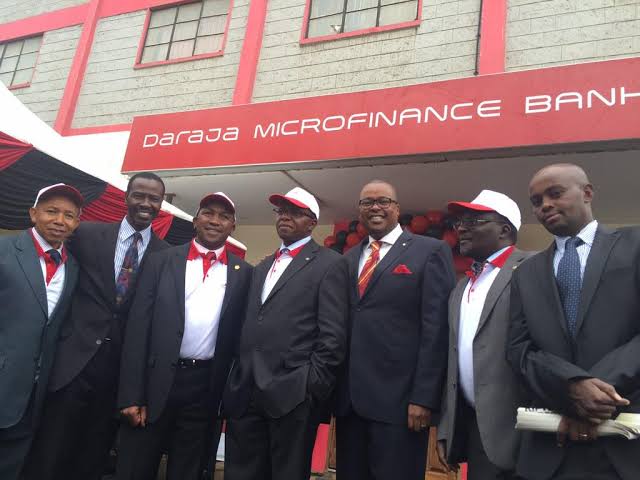 After recent insight published here exposing the sinking Daraja microfinance bank with clients money ( Another Bank Sinking With Depositors Money ), the bank haven’t conducted official communication to its clients why they still can’t withdraw their money – a mission aimed at continuation to prey on new unsuspecting clients who doesn’t know the secret Daraja bank’s motto: “Transaction once made, cannot be returned” A motto which reminds me similarly of Mombasa anthem: “Mombasa kuingia raha, kutoka ni mauti.”

After the publishment of the ‘heist’ taking place, our source on the ground had to be given clues unconditionally to try de-escalate the tension. Clues of meetings taking place behind closed doors and which only escalates and implicates the suspicion of the grand heist even further. Different story line are given to different clients to calm down their impatience. Some have been told that there is an investor who’s being vetted secretely to purchase the bank, while some are told that the board of directors are planning to finance the bank on their own – literally from their own pockets. All of which only approves the suspicion that there’s no money – where did it go? Why hasn’t CBK as the regulator taken action despite having knowledge of what’s going on there? Why is the bank still open doors?

“The bank has still not done any official communication. What is annoying most is that I am told to wait until the bank directors pump in money so that I can get my money back.This is not what I signed up for when I was fixing my money with Daraja. Also the bank officials tell us that there is an investor who is in the process of buying the bank so we wait until the vetting process is complete.Honestly how is that our business as customers.Some were told the bank is looking for funds so that they start giving us in instalments.We want money in full and not in bits.And when they pay you your 1st instalment it’s not definite or consistent when you will get your next instalment .When will the directors pump in money?When will the vetting process be complete?Systems are down always until when?They hold our money against our will and they won’t pay us any interest,” statement report by one of the victims.

Despite all these unrest and hullabaloo, daraja have kept its doors open with an aim to prey on unaware new clients who are likely not able to get their money back once they make their deposit.

With alleged and unknown investor being groomed to take over the bank as alleged by conered bank officials, it must be on its death bed and it might sink deeper like Spire bank.

Authorities are not being helpful as most cries of the defrauded clients having fallen on dead ears. Meanwhile, the bank continues to recruit and leverage on new clients who haven’t done their due diligence instead biting snake oil.

Markets Authority is currently under fire from the Cytonn’s troubles as many now out the blame on them for failing to cushion the investors well in advance. The same case could be happening in the situation of Daraja where authorities are playing bird box while exposed Kenyans continues to count loses.

Kenya has become a land of lawlessness where one can coin a Ponzi scheme and get away with it. We’ve seen fall of bigger banks such as imperial, Chase wgwre authorities like CBK slept on their jobs deliberately and hanging Kenyans on the dry.

It is Everyman for himself when the relevant authorities turn a blind eye. For now The message is home. Beware! Bank with Daraja bank knowing the risks involved.

Kenya Insights allows guest blogging, if you want to be published on Kenya’s most authoritative and accurate blog, have an expose, news TIPS, story angles, human interest stories, drop us an email on [email protected] or via Telegram
Related Content:  A Cockpit Fight Between Two Pilots Led To The Crashing Of Kenya Airways Flight In Douala Killing 100 People
Related Topics:Central Bank of Kenya (CBK)CytonnDaraja Microfinance bank
Up Next