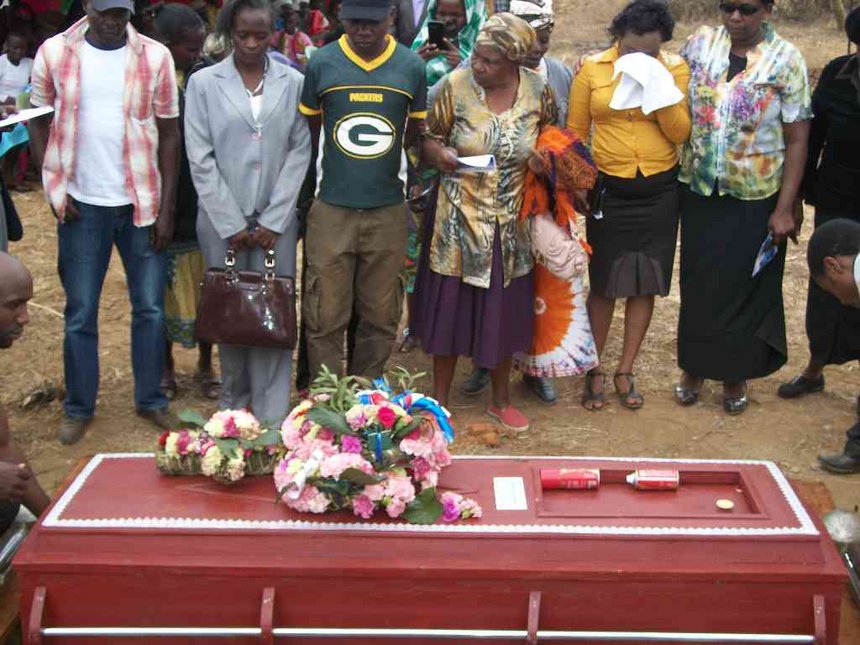 Just when you thought extrajudicial killings by the police would cease with the brutal murder of lawyer Willie Kimani who was killed alongside his client and the taxi driver, more terror continue to be unleashed by the same force.

A 27-year-old deceased man identified as Ngandi Malia Musyemi was being treated of gunshot wounds sustained earlier on Wednesday night at around 8 pm when the officers reportedly followed him to the hospital and finished him off at 3 am.

Two police officers have since been arrested in this respect. One of the officers is reported to have laid wait outside as his colleague accomplished the mission, sending panic at the hospital where other patients were admitted.

“The deceased had earlier recounted to police how he was hijacked at Majengo area in Kitui, blindfolded and taken to a thicket at Sosoma junction where he was shot in the head and left ribs,” a senior police officer said of the incident that occurred off the Mwingi-Garissa Highway.

An investigation has since shown that it is the two police officers who had hijacked him earlier and shot him, leaving him in a critical condition before he was assisted to hospital by passers-by, according to police.

“He is accused of being a robber and was under investigation for some murder cases, including a police officer’s child,” a detective said, but could not confirm if the child belonged to any of the two officers arrested or if there was any conspiracy to have the suspect killed.

Ngandi Musyemi, 26, was admitted to the facility on Wednesday with bullet injuries after he was carjacked in Majengo, Kitui town at 8.30am while in the company of a female friend.

Related Content:  DCI Kinoti Has Closed In On A Sh34B Theft

The attackers claimed they were police officers and forced him into their white car.

“He was blindfolded and forced to sleep facing down, driven to Ukasi area where they shot him several times,” Musyemi’s sister said.

“They then left thinking that he was dead, only for him to struggle to the main highway and call for help from good Samaritans who took him to Ukasi health centre. From there, the police took him to Mwingi general hospital,” she added.

She said the family is yet to understand why his brother was not guarded by police, despite the fact that he was a patient nursing gunshot wounds.

Musyemi – a second-hand shoes dealer in Kitui – was hospitalised after he was shot at the back of the head and at the left cheek, as well as the left ribs.

The sister said the assailants were permitted to enter the hospital at 8pm, which is past the authorised visiting hours.

“They hid in the hospital until 3am when they completed their mission,” she said.

“Though he was in great pain he was conscious since he was talking,” Musyimi’s sister said.

Meanwhile, Musyimi’s sister Sharlyne Malia who witnessed his brother being shot dead in his hospital bed has claimed that the men who killed her brother are after her.

On Saturday morning, she slithered out of a family meeting at Kathiani village in Kitui West, after claiming that two men came looking for her.

Mr Musyimi’s family claims he is a victim of extrajudicial killings.

“My brother was picked up by police from his house and was first taken to Kitui Police Station. Later he was brutally killed. They must tell us why they killed him,” said Nicholas Mukando.

The officers thought to have killed Musyimi and in realising he wasn’t dead, followed him to the hospital where they pumped 17 bullets to his body allt these in the full glare of the sister. Being a crictical witness, the sister need to be put on witness protection immediately.

Extrajudicial Killings have heightened in recent times and it’s high time theDCI Muhoro who’s heading the killer unit to take responsibility and resign since he’s unable to stop the senseless killings. The killing of this gentleman must cost as much concerns as that of Willie and rest of police brutality. There need to be a stop into this madness.

Kenya Insights allows guest blogging, if you want to be published on Kenya’s most authoritative and accurate blog, have an expose, news TIPS, story angles, human interest stories, drop us an email on [email protected] or via Telegram
Related Topics:CorruptionHuman RightsInvestigationsSecurity
Up Next

Analysis: Why Nobody In Kenya Dares Touch Safaricom

Revealed: How A Worried Safaricom Used Backdoor To Shutdown Bitcoin Which Was Set To Neutralize Mpesa Dominance In Kenya