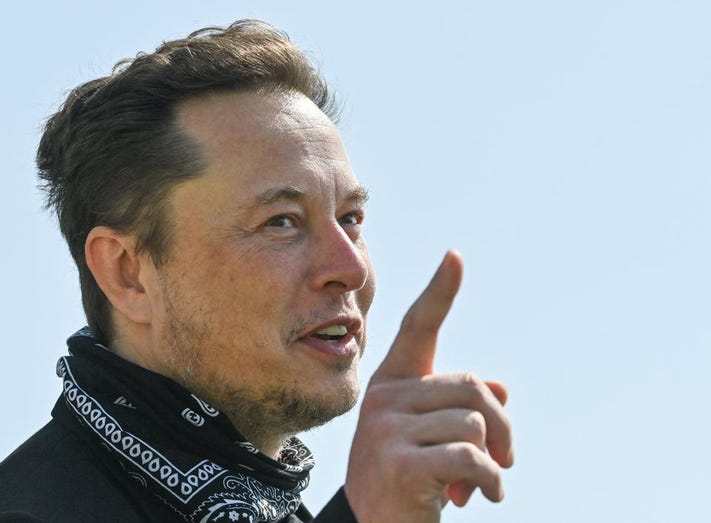 Elon Musk became the third person to ever be worth $200 billion on Monday, riding a surging Tesla stock that in turn made him the richest person in the world.

His milestone feat follows Amazon founder and space rival Jeff Bezos, who first reached the $200 billion mark in August 2020, and luxury magnate Bernard Arnault, who did so for a short time last month. Shares of Musk’s electric vehicle company Tesla continued a four-month rally, closing up 2.2% at $791.36, the highest they’ve been since February this year. Musk became $3.8 billion richer on Monday and was worth $203.4 billion at the close of markets. He surpasses Bezos, whose fortune fell by $1 billion Monday to $197.7 billion due to a 0.6%  decline in Amazon stock.

Musk is even richer now than he was at Tesla’s peak in January—when he briefly became the world’s richest tycoon for the first time—because he’s received additional stock option grants that have increased his stake in Tesla; he has about 73.5 million Tesla options worth about $53 billion. Musk owns more than one-fifth of Tesla; Forbes discounts a portion of this stake to account for shares he has pledged as collateral for loans.

Musk’s fortune is heavily tied to his ownership of Tesla, which ended the day Monday with a market cap of more than $792 billion, and SpaceX, which was valued at $74 billion after a funding round in February. After promising last year that he would ditch almost all his personal possessions, including six mansions, he now owns one house and counts his primary residence to be a 400-square foot rental unit.

Shares in Tesla rocketed up more than 720% in 2020, helping to increase Musk’s net worth by more than $125 billion in a year. After trading places with Bezos as the world’s richest person for several days in January, Tesla stock began to decline. By April, Musk was surpassed by Arnault as well. The unusually frequent shuffling atop the billionaire leaderboard continued last month, when Musk became second richest again, trailing only Bezos.

The two, who head competing rocket companies—SpaceX for Musk, Blue Origin for Bezos—have also traded banter over their billionaire space race. Last month, tensions spilled over into a lawsuit by Blue Origin against the federal government to dispute a $2.9 billion NASA contract that was awarded to SpaceX.

Kenya Insights allows guest blogging, if you want to be published on Kenya’s most authoritative and accurate blog, have an expose, news TIPS, story angles, human interest stories, drop us an email on [email protected] or via Telegram
Related Topics:Elon Muskforbes billionairesTesla
Up Next