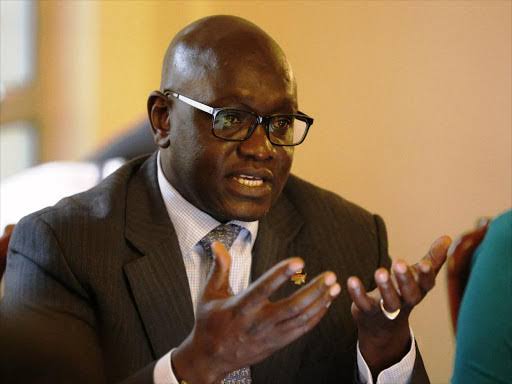 In August 2020, The Thirdway Alliance party suspended its party leader Dr. Ekuru Aukot over financial impropriety and lack of transparency to party members.

Aukot’s fate was decided by a resolution made by National Executive Committee (NEC) following a meeting held at the party’s headquarters.

During the meeting, NEC considered complaints raised against Aukot by party members, including self-enrichment, non-accountability and lack of transparency.

He was also accused of defying a court order in a children’s case, hence violating Chapter Six of the Constitution of Kenya.

The party’s NEC suspended Aukot indefinitely and barred him from representing or transacting any business on behalf of the party.

Prior to his suspension, three officials of the Thirdway Alliance moved to court seeking orders to stop party leader Ekuro Aukot from proceeding with his relaunched Punguza Mizigo initiative to amend the Constitution.

They claimed that Aukot never disclosed how much was raised during the first initiative and from what sources was the party able to finance the process apart from donations and contributions from well wishers.

These circumstances clearly illustrated his thirst for money through ‘acfivist’ initiative in the name of Punguza Mizigo.

Few months after suspension, broke Ekuru Aukot in November 2020, sold a car registration plate number KBL 502B to one Kamau Njoroge. ‘Punguza Mizigo’ activist Ekuru Aukot later reported the vehicle stolen and Mr Njoroge was summoned by police to appear before the DCIO where the vehicle was forcefully taken from him. Four days later, the said vehicle was given back to Ekuru Aukot.

Consequently, Mr Njoroge made a report at Muthangari Police station on how Dr. Ekuru Aukot had obtained money from him in the pretext of selling the vehicle to him but had refused to transfer and/or facilitate the transfer and now had colluded with officers at Kabete Police Station to defraud him of both his money and the car, wherein he was issued with O.B. No. 26/08/11/2020.

Despite the police asking him to come with witnesses, provide documentations, and other necessary things to prove his case, many months later, nothing has been done.

Mr Njoroge has since written to the Office of the Director of Public Prosecution on the criminal conduct of Dr Ekuru Aukot.

“We contend that the actions or conduct by Dr. Ekuru Aukot amount to a criminal offence under Section 313 of the Penal Code and that the Police’s actions this far are wanting and conduct unbecoming, to say the least. As such, we write to request you to call for the file and take the necessary action to protect our client’s rights which are being trampled upon. It is noteworthy to state that justice delayed is justice denied.”, Mr Njoroge through his lawyer Saluny Adocates LLP said.

The above letter was copied to the Independent Policing Oversight Authority (IPOA) and is on record.

Kenya Insights allows guest blogging, if you want to be published on Kenya’s most authoritative and accurate blog, have an expose, news TIPS, story angles, human interest stories, drop us an email on [email protected] or via Telegram
Related Content:  School Principal Throws Sudi Under The Bus In Forgery Case
Related Topics:
Up Next

UDA ahead in Kingi succession race