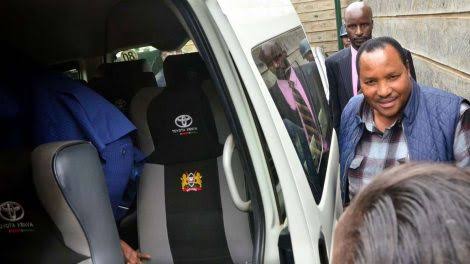 Kiambu Governor Ferdinand Waititu being whisked away by DCI sleuths from his home after early morning raid where crucial evidence was recovered.

The commission on Wednesday said it received information the bail was issued by a magistrate who was on a sick leave.

Principal Margistrate Brian Khaemba had declared the affidavit presented to the court by Waititu’s lawyer Ashiolya Biko met all the requirements for anticipatory bail.

He was granted Sh500,000 anticipatory bail despite Judiciary regulations requiring that this is done by the High Court.

EACC Chief Executive Officer Twalib Mbarak said the commission received credible information that Khaemba was on a sick off last Thursday, and had appeared just to hear the application before leaving.

The governor is accused of awarding tenders to companies associated with him and his family members through which the millions were siphoned from public coffers.

Earlier this month, the Kiambu County Government presented the Senate with a financial statement showing Waititu may have allocated budgets for functions unrelated to Kiambu.

Kenya Insights allows guest blogging, if you want to be published on Kenya’s most authoritative and accurate blog, have an expose, news TIPS, story angles, human interest stories, drop us an email on [email protected] or via Telegram
Related Content:  Why Tanzania Is Yet To Issue Safaricom’s Sylvia Mulinge With Work Permit For Vodacom MD Job Months On
Related Topics:
Up Next