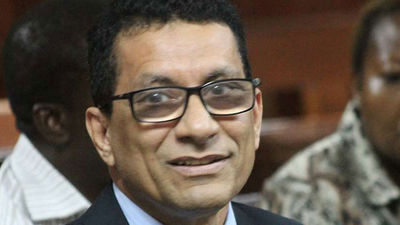 Dubai Bank chairman Hassan Zubedi has been charged afresh alongside five others with conspiracy to steal over Sh 500 million from Kenya Airways (KQ).

The Chair, Elijah Githinji, Grace Mathenge, Jane Kiboi, Jackson Njiiri and Elias Kyalo Ngai are accused of conspiring to steal Sh 521, 939,870 the property of KQ between 1st January 2013 and 30thDecember 2015 at an unknown place in Kenya jointly with others not before court.

The six are accused of money laundering, to wit, engaging in fraudulent cash transaction between 1stJanuary 2013 and 30th December 2015 at Dubai Bank Ltd in Nairobi County jointly with others not before court, actions which led Kenya Airways to lose Sh 521, 939,870.

Zubedi is also facing a solo charge of stealing Sh 8,500,000, the property of KQ between 13th April and 27th May 2015 at Dubai Bank ltd Eastleigh branch in Nairobi County, jointly with others not before court.

The court further heard that on or before 4th April 2015 at unknown place, Elijah Githinji jointly with others not before court with intent to defraud, forged Citibank account advice report for Sh 21,949,849 and Sh 13,500,000 purporting them to be genuine and valid account statement advice reports of the above account, a fact he knew was false.

They all denied the charges before Senior Principal Magistrate Robert Ondieki are out on a cash bail of Sh 300,000.

Kenya Insights allows guest blogging, if you want to be published on Kenya’s most authoritative and accurate blog, have an expose, news TIPS, story angles, human interest stories, drop us an email on [email protected] or via Telegram
Related Content:  UK Issues Wilson Airport Travel Warning Over Incidents
Related Topics:
Up Next