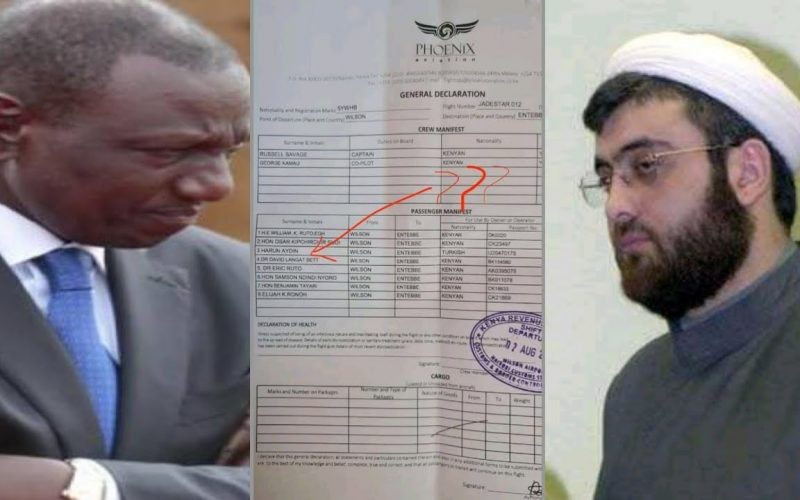 HOW IT WORKS • Money laundering seeks to hide the source of money believed to have been obtained illegally, by passing it through channels including commercial transactions and other forms of investment.• According to the United Nations Office on Drugs and Crime (UNODC) about Sh200 trillion is laundered globally every year.

The decision to block Deputy President William Ruto from travelling to Uganda was made on July 31 following concerns by the government that his frequent travels to the neighbouring country could be linked to money laundering schemes, impeccable sources have told People Daily.And even as debate on the aborted trip rages, focus by security officials has shifted to seven Turkish nationals, six men and a woman, who have been shuttling between Istanbul, Entebbe and Nairobi for the past few months.Their activities, which culminated in the standoff at Nairobi’s Wilson Airport on Monday when Ruto was blocked from travelling out of the country by immigration, have been closely monitored for months by Kenyan authorities.The details from security agencies, however, contradict the explanation given by Ruto yesterday that he was leading a delegation to commission a Covid-19 vaccine plant that he had helped Turkish businessman Harun Aydin to put up.Speaking during an interview with a local radio station yesterday, Ruto claimed he had helped Aydin to acquire a Sh15 billion loan from Equity Bank to set up a vaccine processing factory in Uganda, which he and three other businessmen alongside his close allies were scheduled to commission on Monday.“I helped him on one phone call. He said the benefits Ugandans will get are the same that Kenyans will get. There were three businessmen in that trip. The Turkish Embassy has issued a statement confirming that the gentleman is an investor who has a valid work permit,” said Ruto.The DP, who had visited the East African country early last month, condemned those involved in the cancellation of his trip, terming the move “foolish and selfish”.But government sources revealed that security agencies had placed the DP on the radar after they became suspicious about his movements and interactions.During Ruto’s July 6 private visit to Uganda, he had met two men and a female, all Turkish nationals. According to sources, the four held a day-long meeting which was not attended by Aydin.“The pictures circulated showing the DP at the launch of a vaccines factory were diversionary, he spent most of his time meeting with the Turkish delegation,” a security source said.Two of the foreigners, Hamit Demir, holder of passport number U23165848 and Mehmet Akif Bagle, holding passport number U11979628, flew from Nairobi’s Jomo Kenyatta International Airport to Entebbe on July 6. They had applied for Ugandan visas while in Kenya.Intelligence officials Since there are no direct flights between Entebbe and Istanbul, the Turkish capital, travellers have to go through Kigali, Addis Ababa, Cairo, Nairobi or Doha. The two departed JKIA at around 8.30am and arrived in Entebbe International Airport at around 9.50am, according to sources.The sources said intelligence officers had launched a probe into the activities of some of the foreigners. Security officials were, however, not sent to Uganda to establish the real agenda of the meeting “due to risks involved”.Following these developments, senior Kenya government and security officials decided on Saturday July 31 that the DP would not be allowed to travel out of the country. He was, however, not informed.Intelligence officials believe the meetings with the foreigners point to a scheme where the visitors could be used to launder money currently outside the country by purporting to invest it in Kenya.This might explain why Monday’s controversial trip that involved some politicians and businessmen close to Ruto was billed as an investment mission where the Turkish man Aydin was presented as a partner in a multi-billion shilling fruit farming venture.Kapseret MP Oscar Sudi, one of the MPs in Ruto’s delegation, has said they wanted to explore farming opportunities in the neighbouring country. “There is a large fruit farm of which the Ugandan government can buy shares,” Sudi said.Money laundering, according to authorities, seeks to hide the source of money believed to have been obtained illegally, by passing it through channels including commercial transactions and other forms of investment.According to the Financial Reporting Centre, such schemes seek to hide and legalise the funds without catching the attention of authorities and also making sure all connections of the funds to criminal activities is removed.Finally, the “cleansed” money returns to the owner in an indirect way, and is used for legitimate purposes. According to the United Nations Office on Drugs and Crime (UNODC) about Sh200 trillion is laundered globally every year.During his July visit to Uganda, Ruto built a case for collaboration in addressing challenges facing African countries.“We are keen to building partnerships with other African countries to move the continent away from only packaging and labelling of drugs to the restructuring of its market to focus more on upstream production,” he tweeted.The same evening, President Museveni tweeted: “Kenyan Deputy President William Ruto paid me a courtesy visit at State House Entebbe this evening.” On Tuesday, Sudi told the Daily Nation that the purpose of Ruto’s trip to Uganda was to learn political lessons from the National Resistance Movement (NRM) which has ruled Uganda for more than 35 years.And yesterday, ODM secretary general Edwin Sifuna wondered why the Ruto team would want to learn any political lessons from Uganda.“When looking for examples of countries we can emulate, it’s often Singapore, Malaysia, the Nordics like Finland and Denmark. There is reason to worry when someone who wants to lead Kenya gets his inspiration from Uganda,” he said.In the abortive Monday visit, Ruto was to be accompanied by Aydin, MPs Ndindi Nyoro (Kiharu), Benjamin Tayari (Kinango) and Sudi; Mombasa businessman David Langat, Eric Rutto and Elijah Rono.The team was blocked at the Wilson Airport before they were allowed to travel, without the DP.The whereabouts of Aydin, holder of passport holder number U20470175, remained unknown yesterday after it was confirmed that he did not come back from Uganda on Tuesday when the rest of the delegation returned home. Records at a city hotel where he had been staying since June 24 indicated that he had checked out.

Related Content:  ‪State Admits Cuban Doctors Have Failed As They Resort To Local Doctors For Help‬
Kenya Insights allows guest blogging, if you want to be published on Kenya’s most authoritative and accurate blog, have an expose, news TIPS, story angles, human interest stories, drop us an email on [email protected] or via Telegram
Related Topics:Deputy President William Rutomoney launderingTurkish investorsUganda vaccine plant
Up Next

Why Ngugi Quit His Lucrative Job As Kenya Power CEO