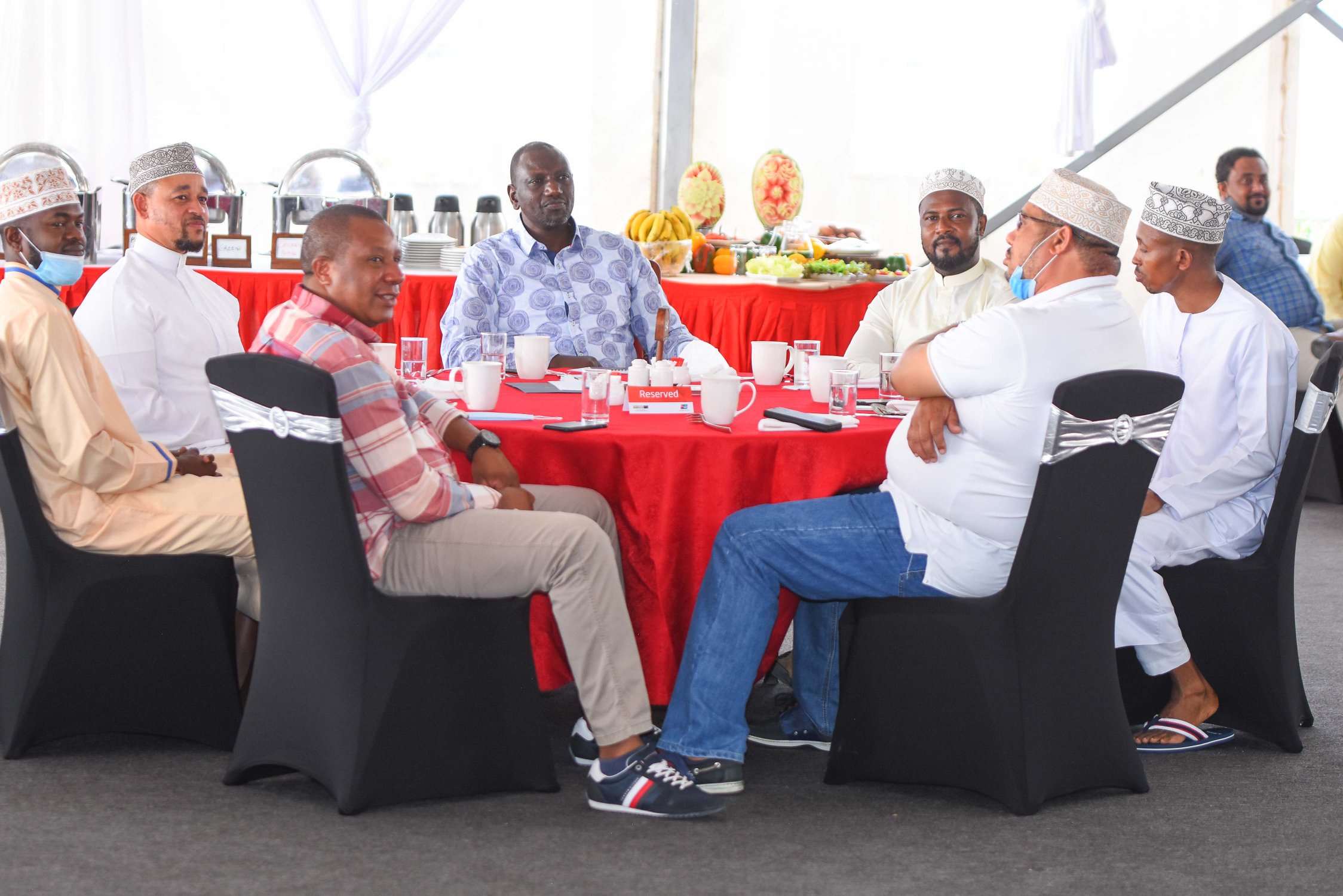 Ruto in Mombasa where he met Muslim leaders.

Political rift between the President and his deputy Ruto continue to widen by the day. Things haven’t been the same since the handshake when Uhuru decided to work with Raila whom Ruto views as his biggest rival.

The two jubilee partners have often differ in numerous issues including the push for referendum that the President and Raila have been championing. Ruto who has in the recent times self alienated, has not been active in day to day running of the government and has been left with a shell for an office.

Its ages since he was seen at a state function and has been reduced to hosting groups at his Karen as he consolidates his grounds and team ahead of 2022.

In subliminal attacks, the President has been castigating the DP for campaigning instead of concentrating on development as he prepares for his exit and determined to leave a legacy.

Wrangles within Jubilee party has seen the deputy’s faction exchange fire with Uhuru’s led by the chairman David Murathe.

Murathe has never minced his words and more than once has dared the DP to exit the party.

In what could be the first public confirmation that the DP is considering bolting out, Ruto told Joe Ageyo during an interview on Citizen TV that should talks hit a wall, he’s prepared to leave jubilee for another umbrella in his bid for presidency come 2022.

Reports now indicate that as a precaution and just getting ready for anything, the DP has already registered two political parties through his proxies who’re close allies.

All are Mr Ruto’s allies. “We gather that he wants to bolt out. He is free to do so and form another party. This one has its owners. I heard him call us junior fellows in the party, how do junior people run one out of town surely?” Mr Murathe posed.

During the interview, Ruto had accused Murathe whom he referred to as conman of having invaded the party and running it as a private property. Murathe in response said that Ruto is mad because his plan to take over the party was thwarted.

The jubilee chairman has gone further to tell Ruto to leave the party if he feels shortchanged sending him a warning that things are just getting started and will get to the worst. “Mambo bado, hii ni kionjo tu. You wait, atajua hajui (The game has yet to start, what you have seen is only a test run. We’ll prove to him that he’s not as smart as he thinks),” Mr Murathe charged.

Former Vice President also in an interview with Joe Ageyo said the DP has self alienated and decided to play victim. Kalonzo challenged the DP to resign and leave jubilee if he feels it has been invaded by conmen.

Ruto is currently in the Coastal region on a tour holding meetings with different members of the public.

Related Content:  Council Of Governors Threatens A Total Shutdown On County Operations And Dissolution Of The Senate
Kenya Insights allows guest blogging, if you want to be published on Kenya’s most authoritative and accurate blog, have an expose, news TIPS, story angles, human interest stories, drop us an email on tips.kenyainsights@gmail.com or via Telegram
Related Topics:
Up Next

Ruto Flies On Commercial Plane To Mombasa, No Grand Reception