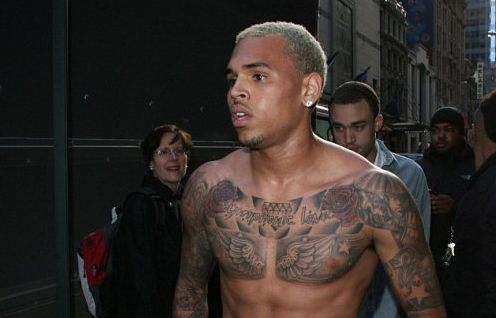 The most anticipated performance of the year in Kenya finally came to reality when the international RnB star Chris Brown finally touched in in his private jet for one of the most expensive concerts in the recent times.

As he was making his way out of the airport to his waiting car, like he has been, Chris encountered an excited fan who asked for a selfie with him, but he politely turned her down saying “No baby.”

This video brings to an end debate. Chris Brown didn't break any phone only Crushed self esteem pic.twitter.com/nLE3SVvTTY #DeportChrisBrown

Unconvinced, the lady identified as Brenda Chepkoech, followed the superstar to his car and photos show the same. Reports emerged in the media moments after Chris left the airport on sections of media especially Nation Media Group that the singer had smashed the fan’s phone.

In an interview with NTV, who by then were under pressure to justify and give proofs that indeed the singer smashed her phone, Brenda says Brown grabbed her phone and threw it away when she was positioning herself to snap a selfie.

While it’s manner less and high scale psycho case to follow him even after turning down selfie request, it’s hard to believe the incident occurred since no footage has emerged to prove the allegations. It’s important to note near to 50 journalists were at the airport to receive the singer and all his steps from the jet to the car were covered. It’s nearly impossible for such a scuffle to go uncaptured with the dozens of cameras that followed him. The impact on her phone which from physical appearance look unscratched also disqualifies her allegations.

Enjoying her 40 seconds of fame, she’s showing the phone to journalists. You can see her phone unscratched

As usual, social media users who were sitting waiting for the pettiest moment to snap on took to Twitter trending #DeportChrisBrown basing their judgments on nothing but hearsay. No evidence to prove that he smashed the phone. This happening months after Koffi Olomide was deported following an assault on one of his dancers. The whole incident was caught on tape, unlike Chris.

She’s still having her phone with her as Chris Brown enters his car. Said in NTV interview that he threw it away when entering the car

Well, Brenda, you’re lucky enough Chris called you baby, and you can go around telling your friends Chris Brown smashed your phone, not a bad thing of you asked me. Learn to let go when one says No. Anyway, lies don’t stay for long; you can’t sustain a lie. It shows. Now let Chris Brown rock Mombasa.

Kenya Insights allows guest blogging, if you want to be published on Kenya’s most authoritative and accurate blog, have an expose, news TIPS, story angles, human interest stories, drop us an email on [email protected] or via Telegram
Related Topics:Chris BrownInvestigationsNews
Up Next