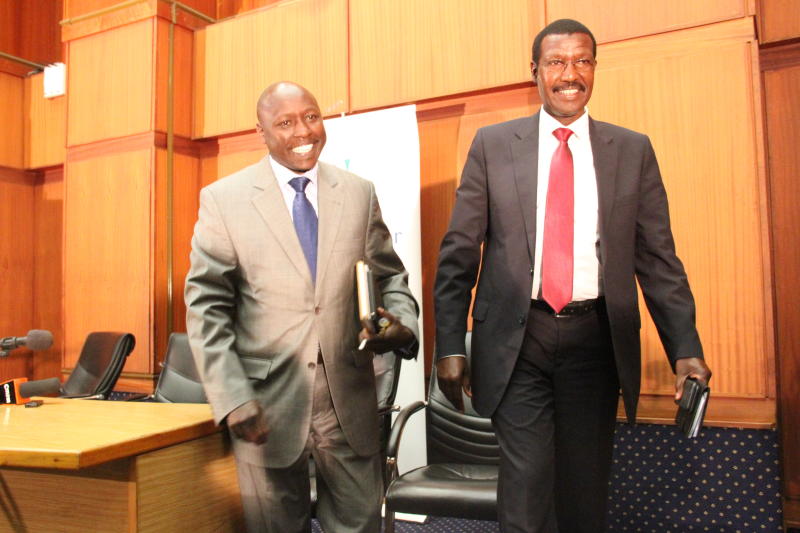 Director of Criminal Investigation detectives have found the vital tender documents in the Sh400 million suit where former KPLC Chief Executives Ken Tarus and Ben Chumo—are in court for irregular purchase of faulty transformers have been recovered.

Nairobi High court was today, Wednesday told that the procurement documents, which had mysteriously vanished from Kenya Power offices had been retrieved from different files.

Speaking before the High court, two witnesses told senior principal magistrate Kennedy Cheruiyot that the vital documents relating to tender documents were scattered in different files. The missing documents were tenders papers for purchase of 708 transformers by a firm called Muwa Trading Company for Sh408 million, but 327 of them turned out to be faulty.

Dr. Chumo and Ken Tarus have been battling it out with the State in courts as DCI Prosecutors stated that this Transformer Tender also flouted procurement rules for State entities.

A senior supply chain manager based in Thika, Mr. Justin Maina, told the court that the Directorate of Criminal Investigations sought documents relating to Muwa Trading Company, which has been accused of supplying faulty transformers to KPLC.

According to Maina the transformer tender Document, which had 12 tender documents relating to the procurement, went missing and they were forced to look for them in the other files.

Maina was attesting in a case in which former KPLC Secretary Beatrice Meso together with the former head of supply chain John Ombui as well as Ruth Oyile, had been charged with conspiracy to defeat justice. It is alleged that they led to the loss of original tender documents, knowing that they would be required for an ongoing criminal case.

The three accused KPLC officials are alleged to have committed the offense between May 4, 2015, and June 12, 2018.

However, Maina stated that before he was transferred to Thika in September 2018, his team had managed to reconstruct the file after retrieving the documents. According to Maina, sometimes in December 2016, a woman known as Doris from the legal department took a total of 38 files from his desk, but she later returned them although he did not check inside.

Responding to a question asked by lawyer Migos Ogamba for Ms. Meso and Mr. Ombui on- whether the accused persons were responsible for the loss of the documents- Mr. Maina told the court that, once documents have been moved to the bulk filer in the registry, they cease being one’s responsibility as many people would access them.

Another prosecution’s witness Ms Joyce Walowa said that some officers used interns to change the files, in spite of the fact that although she could not recall who gave the claimed instructions.

Ms. Walowa who has worked for KPLC for more than 22 years, stated that the DCI requested the documents when she was the acting supply chain manager logistics.

“We conducted the search as a team and we were not able to get the file intact. The team was able to retrieve the documents from different files,” Ms. Walowa said.

Kenya Insights allows guest blogging, if you want to be published on Kenya’s most authoritative and accurate blog, have an expose, news, story angles, human interest stories, drop us an email on tips.kenyainsights@gmail.com or via Telegram
Related Topics:Ben ChumoKen Tarus
Up Next

Samsung Partners With Microsoft To Knock Out iPhone’s Market Dominance