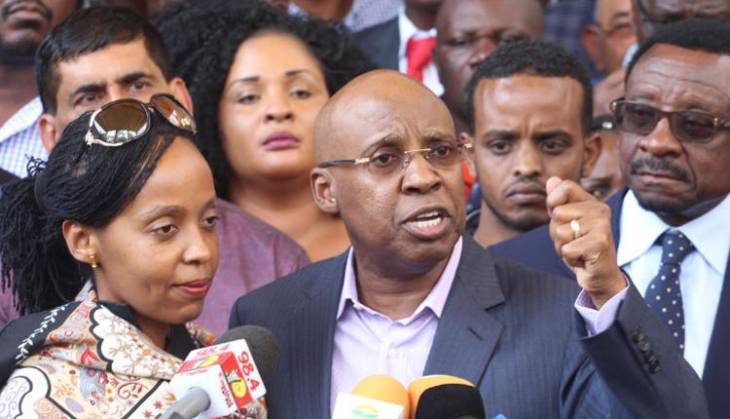 The Directorate of Criminal Investigations (DCI) has recommended the prosecution of businessman Jimi Wanjigi and his wife Irene Nzisa for allegedly obtaining money by false pretence and conspiracy to defraud involving a Sh1.2 billion piece of land in Nairobi.

Detectives from the Land Fraud Unit of the DCI on December 10 forwarded the inquiry file to the Director of Public Prosecutions (DPP) with recommendations that Wanjigi, Nzisa, John Nyanjua Njenga and Caroline Njoki, an advocate, be charged with obtaining Sh56 million from Kenroid Limited, by falsely pretending they were in a position to sell the company a 0.3314 hectare peice of land on General Mathenge road in Westlands.

The DCI had launched investigations to establish the real owners of the land, Grant I.R No.65800 L.R No.1870/II/200, which is claimed by three parties – Aureum Ltd owned by the Wanjigis, businesswoman Cissy Kalunde Musembi and Horizon Hills Limited.

Yesterday, Wanjigi, through one of his aides, declined to comment on the investigations and the report, insisting he was yet to see the communication.

“We are aware of the issue of the land in question but we cannot comment on a report that we have not seen. Let’s cross the bridge when we get there,” the aide said.

The DCI has also recommended that businessmen Mohammed Hassanali, Kaneez Noorani, Hamanshu Dodhia, and Mohammed Hussein Noorani be charged together with the Wanjigis while the Registrar of Titles, Fredrick Lubulellah, be charged with four counts of making false entries in a land document.

According to the DCI, the Wanjigis appointed two proxies, Thuo Augustine Kairu and Tyl Company, to stand in as purchasers of the land on their behalf from Horizon Hills Limited at a cost of Sh154 million.

On April 9, 2010, Kairu and Tyl Limited acquired three company shares at a consideration of Sh51 million from Horizon Hills Limited. On April 23, Kairu purported to have transferred one share to Nzisa before resigning six days later.

On April 29, 2020, Kairu, under Nzisa’s instructions, wrote an unreferenced letter as chairman of Tyl Limited, addressed to the Manager, Chase Bank, authorising him to transfer Sh138.6 million by RTGS from Chase Bank (SBM) account number 1104021100 under the name of JM Njage and Co Advocate at Bank of Africa.

Investigations, however, revealed that Tyl Ltd did not have an account with the bank, which was confirmed by a Chase Bank official in an affidavit dated July 23, 2019.

This, therefore, means no such payments would have been made from a non-existent account.

The probe noted some contradiction in a case where Nzisa claimed that in 2010, jointly with her husband Wanjigi, purchased the land at a cost of Sh154 million from Horizon Hills through Kairu and Tyl Company Limited (John Njenga).

On the contrary, Wanjigi’s evidence indicated the land was offered to them in 2006.

According to the Lands Registry, the land was sold to Dodhia Foam Limited when the lease was about to expire in 1991.

Dodhia Foam applied for a new lease and pursuant to a surrender of old Grant, a new Grant for 50 years was granted by the government and a re-surveying of the land was done culminating in the issuing of a new Deed Plan number 175145, dated July 20, 1993.

From the file, it is purported that Dodhia Foam Limited transferred the land to Velji Premchand Dodhia and Himanshu Velji Dodhia in 1997.

Horizon claims to have purchased the land at Sh33.6 million but there is no proof of  payment or sale agreement.

In early 2018, Nzisa and Wanjigi, as directors of Horizon Hills Limited, took possession of the land and offered it for sale to Kenroid Limited through their lawyer Caroline Njoki Gachihi.

It was during the transaction that the purchaser realised the existence of another company with a similar name, Horizon Hills Limited (under Certificate of Incorporation No.C110776) registered on December 3, 2004, whereas Wanjigi’s was registered on June 24, 2006.

According to Nairobi City County documents, land rates from November 2014 to April 2018 were paid by Horizon Hills Limited but from February 2018 payment was done by Cissy Kalunde Musembi.

Ironically, in the course of the probe, a senior Government Printer John Ondigo stated that he had received three title deeds marked ‘A’ (Cissy Kalunde) ‘B’ (Aureum Limited), and ‘C’ (Horizon Hills Limited).

Ondigo, however, declared titles for HHL and Kalunde’s as not genuine. The DCI, however, dismissed this.

The investigations further revealed that Nzisa and Wanjigi, having realised the misrepresentation, colluded with a registrar of companies official Hiram Gichuhi Wanjohi, and they changed the firm’s name from Horizon Hills Limited to Aureum Limited through a certificate dated May 31, 2018, endorsed on the Grant and at the Lands Registry on June 5, 2018.

Kenya Insights allows guest blogging, if you want to be published on Kenya’s most authoritative and accurate blog, have an expose, news TIPS, story angles, human interest stories, drop us an email on [email protected] or via Telegram
Related Topics:Jimi Wanjigi
Up Next