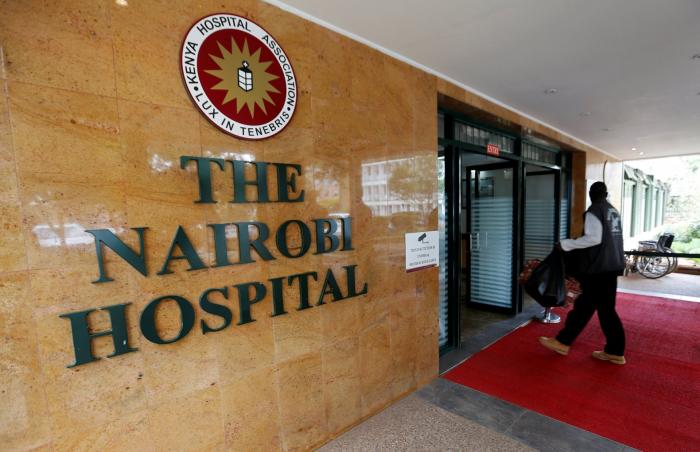 Detectives are investigating a scandal involving healthcare workers at four leading hospitals in Nairobi who are suspected to be colluding with criminals to siphon money from accounts of terminally ill tycoons.

According to the Director of Criminal Investigations (DCI), George Kinoti, the fraudsters collude with unscrupulous health workers to obtain financial details of ailing rich people before hacking into their bank accounts and withdrawing millions of shillings without the knowledge of the victims’ family.

Rev Peter Kania Kariuki, died of Covid-19 related complications on July 26, 2020, and Nairobi businessman Amos Ngata Muiruri, died after a botched surgery almost four months later on November 22, 2020. Both men died at the Nairobi Hospital. Detectives are also looking into the death of John Kinuthia Makumi who incidentally died in Nairobi Hospital in 2019.

“We stumbled upon one case, which has opened a Pandora’s box. Our preliminary findings reveal the deep involvement of some employees of hospitals that are highly regarded,” Kinoti said.

Callous business Kinoti disclosed that though their focus at the moment is on the four hospitals, they discovered that “the callous underworld business has been thriving for a long time”.

He disclosed that detectives had made a major breakthrough in investigating the scam through which millions of shillings belonging to both the dead and the living have been lost through Sim card-swap fraud.

Detectives now believe the wealthy in Kenya have become a major target of fraudsters who collude with crooked employees in well-equipped hospitals that offer quality medical care.

The crooked medical staff, in collusion with the criminals, target personal details of the critically ill tycoons admitted in the hospitals which they use to withdraw huge sums of money from the patients’ accounts upon their demise.

Three of the hospitals are private while the fourth is a public facility. Apart from the healthcare workers, the racket also involves some bank employees and people working for communication service providers.

Using the Sim card swap facility, the cybercriminals use the victim’s telephone number to gain access to their sensitive personal data and bank details including accounts, using the Mobile Banking Apps available on Android and other smartphones.

IT experts explain Sim card swapping as a complicated system which enables cybercriminals to “steal” an individual’s telephone line and using the person’s details obtained without their knowledge. In collusion with crooked employees of a communication service provider, the fraudsters proceed to reactivate the stolen line.

Once they take control of the swapped SIM card, the crooks insert it in their phone, access the financial accounts and transfer the money to other scammed telephone numbers.

Detectives say once the crooks have withdrawn the cash, they switch off the stolen phones, frustrating efforts by sleuths to track them down.

The scam first came into the fore two weeks ago when family members of the late PCEA cleric and Muiruri discovered huge sums of money being withdrawn from accounts of the deceased persons. Kariuki died of Covid-19 complications on July 26, 2020, while Muiruri passed away after a botched surgery on November 22, 2020.

One of Muiruri’s sons discovered that his late father’s telephone line, which he used for mobile bank transactions when he was alive, had suddenly gone dead a week after his burial in Ndunyu Njeru, Nyandarua county.

The line was swiftly activated on another phone. The family was puzzled to discover that more than Sh2.8 million had been stolen through various banking apps operated by different banks.

DCI explains that hardly a week after Ngata was buried at his farm in Ndunyu Njeru, Nyandarua County, on December 2, 2020, one of his sons discovered that the father’s telephone which he used for mobile bank transactions when he was alive had suddenly gone dead. The line was swiftly activated on another unknown phone.

Following a successful reversal of the line by mobile service provider Safaricom to the family, it was discovered that more than KES 2.8 million had been stolen through the NCBA App operated by the NCBA Bank Kenya, the Eazzy Banking App operated by Equity Bank and the M-coop cash app run by the Co-operative Bank. The money was transferred to a different phone number.

According to the DCI, after investigations of this act, it was revealed that the telephone number which was used to clean up Ngata’s bank accounts was the registered line of Rev Kania before he died. The scammers had also stolen Sh500,000 from Rev Kania’s bank account without the knowledge of his widow and his children. Unknown to Rev Kania’s family, the telephone line he used before he died had been used to steal money from the late Ngata and many other Kenyans

Subsequent joint investigations by the Operations Branch, Crime Research and Intelligence Bureau (CRIB) and Special Service Unit (SSU) have since opened a can of worms. Detectives uncovered graves that mark the dark world of the modern, lethal and high-tech phone scammers.

It’s through Ngata’s phone that detectives made a breakthrough in the major SIM-swap fraud through which the dead and the living have lost millions of shillings.

“The syndicate mostly targets wealthy individuals – especially those who have died, and their families placed their death announcements in newspapers. They also target telephone lines of the elderly and those who have travelled abroad.” Said DCI

Besides, the crimes investigative unit records that the telephone lines of those that fall in that category have minimal chances of raising suspicion. They normally strike soon after the person dies and before the family establishes the exact wealth in the deceased’s bank accounts.

In a successful SIM swap scam, the cybercriminals hijack the victim’s cell phone number and use it to gain access to his/her sensitive personal data and bank accounts through the Mobile Banking Apps available on Android and other smartphones.

Once they take control of the swapped SIM card, the crooks insert it in their phones to access the financial accounts and transfer all the funds to other scammed telephone numbers. Once the cash is withdrawn, they switch off the stolen cards frustrating efforts by detectives to track them down.

While investigations are ongoing, detectives have established that dozens of other Kenyans have since been defrauded by the multi-faced gang.