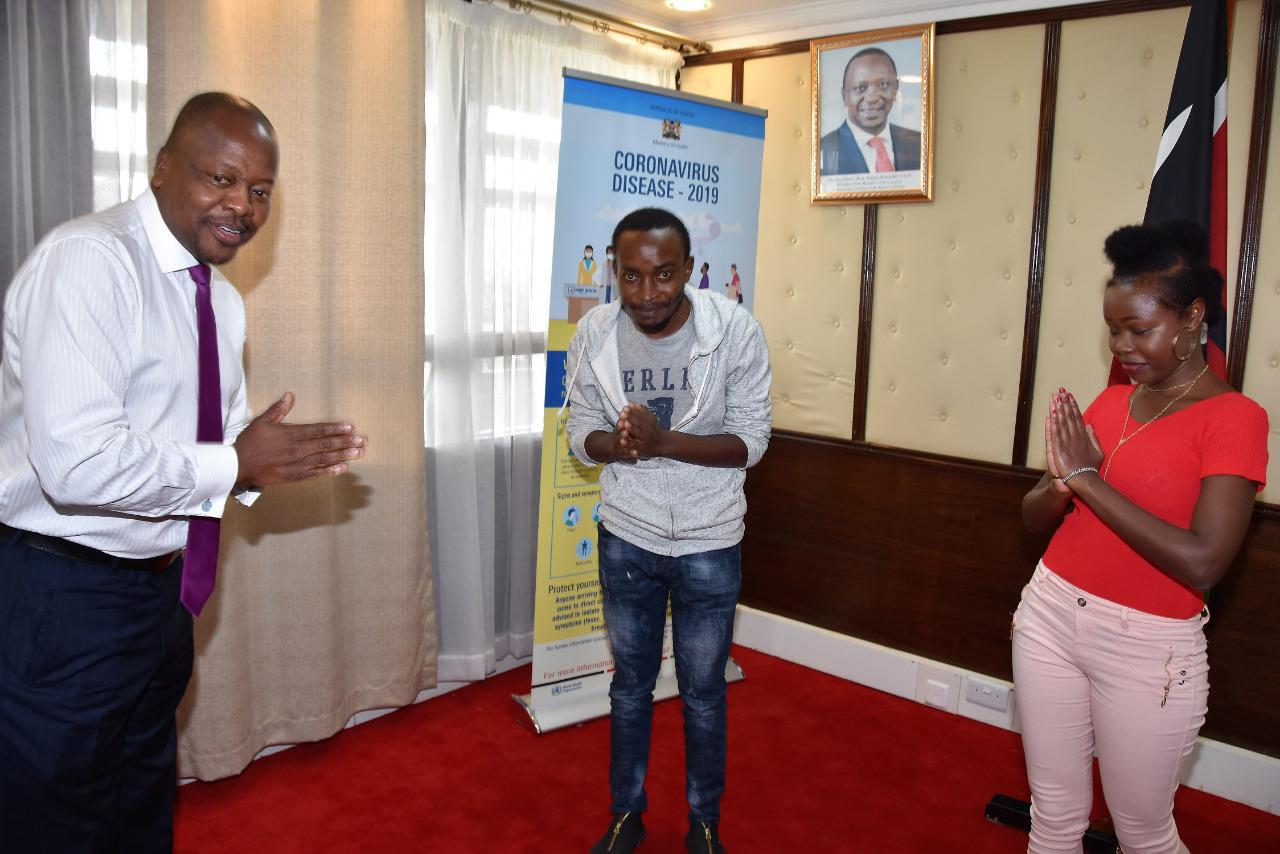 Health CS Mutahi Kagwe who since his appointment has been a darling to many given his presumed effectiveness in the office, could be bidding his good days bye.

The social media streets has been awash with praises of the CS but that didn’t last long before the same people turned against him but that could be his own making as well.

On Wednesday, the government announced the recovery of two Covid19 patients; Brenda and Brian. They were both publicly displayed in a teleconference with the head of state, Uhuru Kenyatta.

Brenda continued with appearances on media stations as a survivor. While her story was meant to give people hope and fight stigmatization that has always come with the virus, things took a different route when people started poking holes in her story.

The more questions people raised with the common one being that she claimed to have been on quarantine for 23days when the government announced she had been in the country since 5th and confirmed in 13th which to the media users, dates weren’t corroborating.

Many users alleged that she was doing PR for the government with the many questions they raised over the inconsistencies in her story. This didn’t go well with the CS who cane out fuming at the inquisitive social media users.

When announcing 29 more confirmed cases in Kenya that now comes to 110 in total, the CS didn’t hold back his fire.

“The situation in our country is not getting better, it is worsening and as a government, we are working hard and I am sad that Kenyans are trivializing our efforts to fight this pandemic,” the Health CS said referring to the social media trolling of the two first cured patients in Kenya.

Related Content:  Senior Counsel Ahmednasir Hints at Filling a Lawsuit Against China on The Consequences Of Covid-19

“Why would we make PR with the lives of the two cured Kenyans, I appeal to the media not to spite these efforts and call upon the law enforcers to arrest these social media users,” the Health CS posed.

In the same breath, many Kenyans have taken to the same platform to call out the CS accusing him of developing dictatorial tendencies by calling for an arrest of those questioning the government.

“THREATS against Social Media users, are UNNECESSARY. Doubt, criticism & praise, will not be stopped by DCI. Instead of DCI being used to arrest ONLINE users, they should be helping to trace contacts via Phone Triangulation, the same tech used to arrest bloggers.” Tweeted Dennis Itumbi, former statehouse operative.

Activist Bonface Mwangi also jumped into the conversation, “CS Kagwe has picked a battle with social media users that he is guaranteed to lose. President Uhuru Kenyatta tried and lost. Let’s remind him Uhuru deleted his social media accounts because of Kenyans on social media. Uhuru couldn’t stand the truth and he reverted to smoke signals.”

“Health CS Mutahi Kagwe will lose the little credibility and support he had faster than Rashid Echesa lost his position. You can’t earn respect and trust through arrests and intimidations. How many will you intimidate? Stop the foolish incompetence. Yaani we have real idiots.” Tweeted Robert Alai, Kenyan blogger.

Cyprian Nyakundi, who was recently charged for alleged fake news following a post he made about KRA boss not self quarantining after a trip from abroad, also had a thing to say, “CS Kagwe’s Job needs a lot of public trust and by asking DCI to arrest social media users for doubting something will make him lose the little trust he had started earning. Let the socials have their doubts, and he clarifies serious doubts. Muzzling their voices is EVIL!”

While Kagwe picked a new pack of battles to fight with the whole social media that forced president Uhuru to delete his Twitter, he might have knocked on unintended door.

Nelson Havi, the Kenya’s Law Society Chairman has taken up the fight for the social media users threatened with arrests and he promises the CS a fierce war. “Health CS Mutahi Kagwe, no one trusts government. Not even President Ronald Reagan. Do not therefore, suppress critical thinking and speech when the people of Kenya want substantiation on any issue Covid-19. This is a battle you will lose with shame. Abandon it in good time.” Havi tweeted.

Its not known if the DCI is already pursuing any specific case as thousands of Kenyans contributed to the issue of Brenda online. What remains in many people’s minds is that questioning the authority is a crime as the CS makes it look like? Wouldn’t it have been prudent for the CS to lay out facts to demystify any lies told and move on as the coronavirus numbers continue to surge. Could it be fair to say the CS is engaging in unnecessary and avoidable dramas? One war at a time bwana CS.