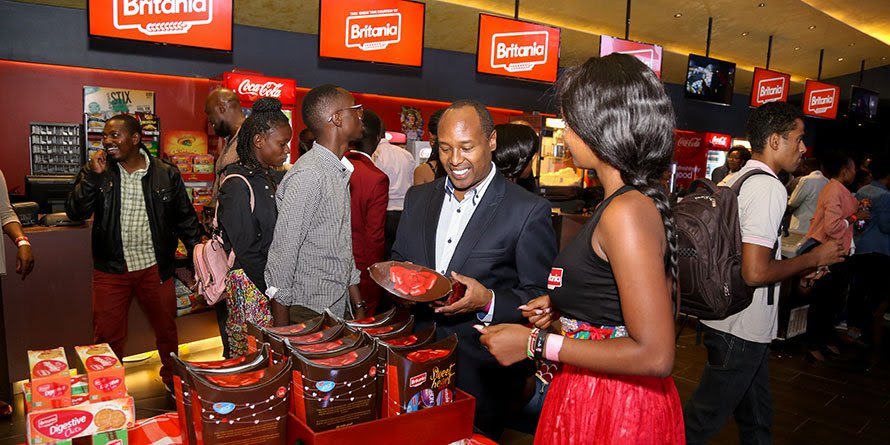 Britania Foods CEO sampling out some of the company’s products.

Top Britania Foods executives and employees are living in fear over CEO Robert Kagundah’s cowboy management style, Kenya Insights has learned. It is unclear how Kagundah got his job as CEO, a role he wasn’t qualified for and too junior for it

He was previously at Coca Cola as HoD. Former colleagues at Coca Cola describe him as a serial womanizer. Several top employees have been fired for crossing his line while he continues to mismanage the company.

Britania Foods Limited workers have accused the top management of irregularly running the company that was in 2017 acquired by Nairobi-based private equity firm Catalyst Principal Partners.

Robert Kagundah is involved in corruption scandals where he reportedly awards contracts to those close to him. Among many others, Kagundah awarded a catering and cake supply contract to CIVA cakes, owned by his girlfriend who is a married woman Cynthia B. Orenge

Britania has been hosting birthday parties for unsuspecting social media parents who apply for their kids. Unknown to them, the cakes and set-up are awarded to CEO Kagundah’s girlfriend Cynthia Orenge, at an inflated cost of Ksh 200,000 per birthday

To further deflate the company, Kagundah made plans to have the birthdays done weekly so his married woman lover can pocket Ksh 800,000 monthly. What is more shocking is the company last year had a severe case of food poisoning experienced by most staff, after consuming the cakes

Britania is fully owned by Catalyst Principal Partners after being purchased in early 2017 from the Dawda family. Our sources indicate that cooked books may have been used to dupe Catalyst into buying the loss-making company

By the time Catalyst found out, it was too late. Cyprian Nyakundi was first to inform the public about corruption at Britania. CEO Robert Kagundah and his sales manager, happen to be best friends, forming an axis of acute corruption that no one at the company can stand up to.

The plan involves working in cahoots with distributors, to dupe the board and management that they are meeting sales targets.

A distributor would for example order biscuits worth Ksh 10 million, and Elijah and his team would report that figure has been met, regardless of whether the distributor sells or not. The distributor would then return back the stock after about three months, very close to the expiry date.

Britania hence ends up losing tens of millions every quarter, and rumors are that Kagundah is paid handsome amounts in kickbacks together with Sales Director Elijah Maina.

Things are so bad, Britania is trying to get into the crisps business, which in itself is shrouded in mystery after they launched a brand owned by the competitor Nuvita.

After spending millions in production costs, Britania was forced to destroy crisps it had produced when Nuvita claimed to own the same biscuit. How a corporate like Britania could miss the most basic step in a name search, ended costing the firm millions of shillings.

Related Content:  How Mike Njeru of Transcend Media Looted Sh100M From Afya House Scandal
Kenya Insights allows guest blogging, if you want to be published on Kenya’s most authoritative and accurate blog, have an expose, news TIPS, story angles, human interest stories, drop us an email on [email protected] or via Telegram
Related Topics:
Up Next